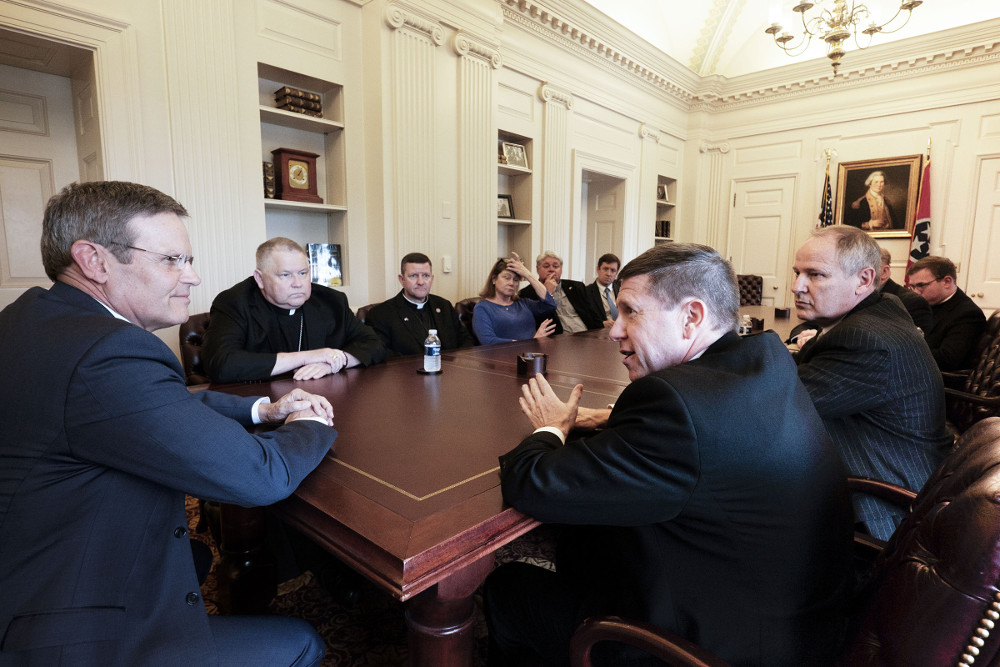 Bishop Mark Spalding of Nashville, Tenn., joined by Brian Cooper, Chief Administrative Officer and Vice Chancellor of the Diocese of Nashville, right, talks with Tennessee Gov. Bill Lee in his office at the Tennessee State Capitol in Nashville April 23, 2019, as Bishop Richard Stika and members of the Diocese of Knoxville look on. The bishops discussed an education savings account bill as well as abortion legislation and pending executions in the state. (CNS/Rick Musacchio, Tennessee Register)

Don Johnson, set to be executed May 16 by the state of Tennessee for the brutal 1984 murder of his wife Connie Johnson, has several people in his corner advocating clemency for him.

His supporters include the three Catholic bishops of Tennessee. But now, Johnson's stepdaughter Cynthia Vaughn, who once supported his execution, has forgiven him and publicly spoken out against his execution.

During a talk at Vanderbilt Divinity School earlier this year, Vaughn described the long and painful journey between the time Johnson killed her mother to coming face-to-face with him inside Riverbend Maximum Security Institution nearly 30 years later.

"I had waited almost 30 years, confined to my own internal house of hell, and he had caused it," she said, describing her attitude going to visit Johnson for the first time: "I had one mission, to tell him what I thought of him. ... I blamed him for all my troubles and pain over the last three decades."

But then, "I realized it wasn't the man on the other side of the thick prison glass that caused me so much heartache, it was me. I realized it was time for everything to end, that's enough, let it go," she said. "I looked at him and told him, 'I have to tell you something, I can't keep hating you. It's not doing anything to you, but it's killing me, so I forgive you.' "

Vaughn then describes racing away from Riverbend to meet a friend: "I couldn't wait to tell him, I was free and I could feel it," she said. "Ever since then, I can't hate him (Johnson). I don't have it any more. Life changed."

Vaughn said she can now find peace and happiness at home in Mississippi with her children and among her friends in her church community. "I love my life now," she said.

The state's bishops, in a hand-delivered April 23 letter to Gov. Bill Lee, asked him to spare Johnson's life. "As we approach the Easter season and its celebration of redemption through Jesus Christ's victory over sin and death, it is within your power to establish your legacy as a governor of Tennessee who does not preside over an execution on your watch," it said.

"I've seen he's a man of faith," Johnson himself said of Lee in a video message to the governor. "I would ask that he does what God leads him to do. I would ask him to do what he feels in his heart is the right thing to do."

At this point, Lee, who took office in January, has the sole authority to commute Johnson's sentence from death to life in prison. He has said that he is actively reviewing Johnson's request for clemency but has not made a decision yet.

"For Don, that restoration of a relationship with his daughter, and her willingness to be a public advocate for his life, is a tremendous source of consolation," Booth said.

Booth leads a Catholic Scripture-based discussion group at the prison on Saturday mornings, and has gotten to know Johnson, who is a regular participant. Johnson is an ordained elder in the Seventh-Day Adventist Church, but "he is an active and respectful member of our group," Booth said.

Johnson acknowledges his horrible crime of 35 years ago and accepts responsibility for that action, but does not deserve to die because of it, Booth said.

Catholic teaching opposes capital punishment in all instances and Johnson's case is an example of the transformation and redemption that's possible in prison. "Considering where he came from, how he was raised, and his own crime, the distance from where he was then to where he is now is astronomical," Booth said.

Last August, Pope Francis ordered a revision of the Catechism of the Catholic Church, which now says that "the church teaches, in the light of the Gospel, that 'the death penalty is inadmissible because it is an attack on the inviolability and dignity of the person,' and she works with determination for its abolition worldwide."

The Tennessee bishops' letter to Lee said: "Rather than serving as a path to justice, the death penalty contributes to the growing disrespect for human life and continues a cycle of violence in society. Even when guilt is certain, the execution is not necessary to protect society."

Booth said he feels Johnson "has a very strong case for clemency," especially with Vaughn supporting the effort. "She's the one who has lost the most because of her father's crime," he said, "and she has forgiven him."

Laurence is a reporter for the Tennessee Register, newspaper of the Diocese of Nashville.