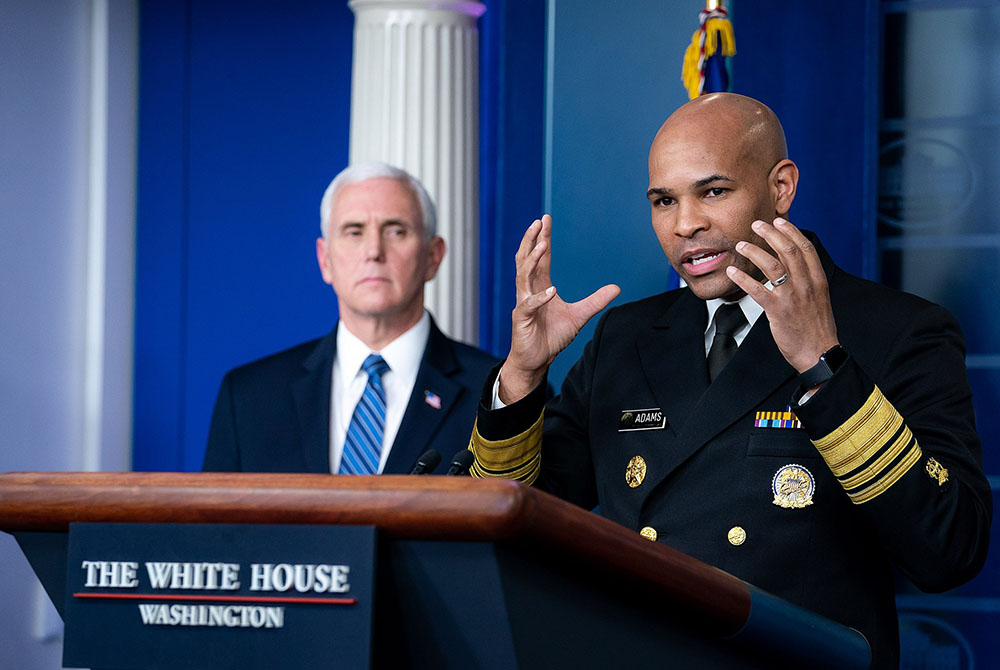 The nation's top doctor wants you to know "that God always has a plan." Experts say that's problematic.

In an April 2 appearance on the radio talk show "Focus on the Family Broadcast," U.S. Surgeon General Jerome Adams was asked to consider, as a man of faith, an age-old question: Why do bad things, like the coronavirus pandemic, happen?

Without hesitation, Adams, who has proudly referenced his Catholic upbringing a number of times in the past few weeks, had an answer on deck.

"I often think about the many places in the Bible where we're told God doesn't put you where you're going to be comfortable. God puts you where you need to be," Adams said.

Because people are scared and anxious, he added, "they need to know that there is a larger plan, a higher power at work."

This was not the first or last time the federal government's public health spokesperson would share this idea. On at least three different occasions since mid-March, Adams has publicly stated his belief in a divine plan. That plan, according to his statements, seems to include Adams' appointment as surgeon general and the pandemic coinciding with Holy Week.

"I really do think God always has a plan," Adams said on Focus on the Family, an evangelical organization that has taken conservative views on public policy issues.

Celia Deane-Drummond, senior research fellow in theology at University of Oxford's Campion Hall and director of the Laudato Si' Research Institute, said that divine providence has always been a part of Christian and Catholic faiths.

"However, to assume that a specific natural event is a deliberate 'plan' of God is far too simplistic," she said. "It is, in my opinion, an irresponsible opinion aired without taking due account of either the science or theology, quite apart from the intersection between them."

Adams came into the surgeon general position in 2017 with a solid reputation. An anesthesiologist by training, Adams was largely credited for convincing then-Governor Mike Pence to allow Indiana counties to create needle exchange programs during a 2015 HIV outbreak while serving as Indiana State Health Commissioner.

Of late, however, Adams has been the subject of much scrutiny. First, for downplaying the threat of coronavirus and defending the president in media appearances, then for scolding members of the media for "bickering" and "partisanship" and most recently for telling people of color they need to "step up" to protect themselves from the coronavirus.

The Office of the Surgeon General did not respond to NCR's requests for comment.

Joycelyn Elders, the surgeon general under the Clinton administration, told the Associated Press that while Adams' heart is in the right place, he has undermined the credibility of the surgeon general's office by being too political.

In his attempts to reassure people of God's plan amid the pandemic, the surgeon general has crossed another serious line, Jesuit Fr. Mark Massa told NCR in an email interview.

"Jerome Adams has no 'official' religious post, and has not been delegated by any religious community to offer prophetic witness in an ecclesiastical sense to anyone, and certainly not to the nation as a whole," said Massa, director of the Boisi Center for Religion and American Public Life at Boston College. "I can't help but think this is a serious boundary violation in terms of a physician making theological pronouncement." 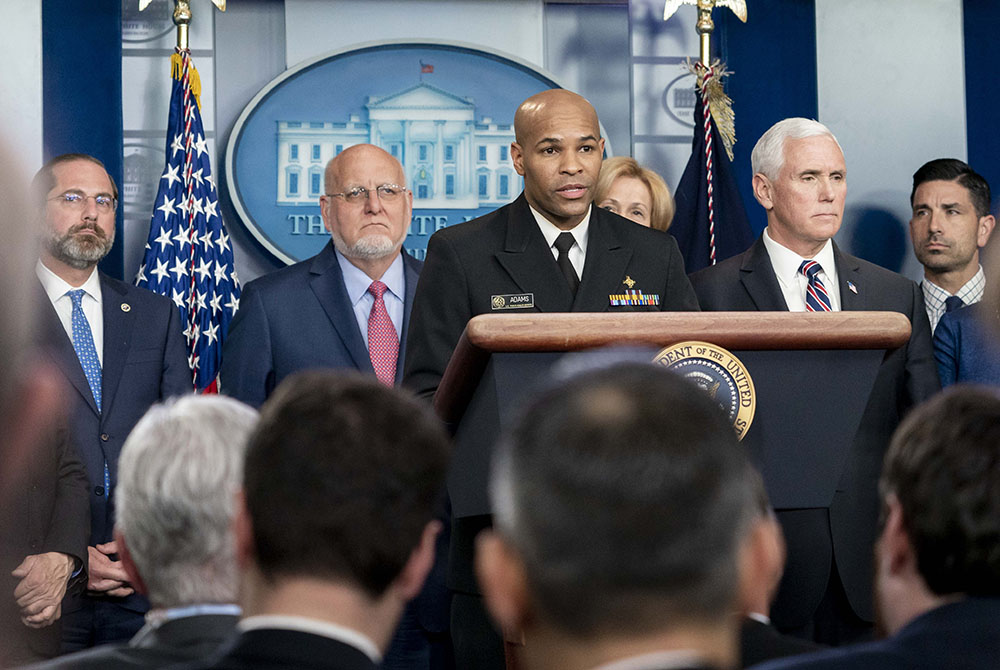 During a March 15 teleconference with the NAACP that included more than 21,000 listeners, Adams said, "I have personally had faith that I am put where I am most needed," according to the Richmond Free Press.

More recently, in an April 10 interview with the Christian Broadcasting Network, Adams said, "I don't think it's a coincidence that this is happening at this time," meaning Holy Week. "During this week we celebrate the ultimate sacrifice that was made for us. God sent his only son to die for us, and it was sad initially but then we saw salvation at the end."

"It is very sad this week when we are seeing record numbers of people dying all across the country," Adams went on to say. "People are sacrificing by staying at home, but the salvation at the end is that we are starting to flatten the curve."

Cathleen Kaveny, a professor of law and theology at Boston College, told NCR that the problem with Adams' statements is not so much the affirmation that God has a plan, but how the statements seem to "tacitly draw upon an idea that God is in a special covenantal relationship with the U.S.," an idea she traced back to the Puritans. That line of thinking suggested that God rewarded the country for pious behavior but also "punished its wrongdoings with material harms – including plagues."

"But the trouble is we are a highly pluralistic nation that doesn't agree on what the 'sins' besetting our nation are," Kaveny said via email. "In this context, I think this approach can lead to scapegoating those who do not conform to the dominant view of God's plan, or Trump's view of the right response."

Adams is not the first surgeon general to hold outspoken religious convictions. When C. Everett Koop was nominated for the position by Ronald Reagan in 1981, Democrats staunchly opposed his appointment on the grounds that Koop, a well-known Presbyterian, would force a conservative religious agenda on the country. Koop, after all, had just published a book opposing abortion a few years earlier.

However, those same Democrats eventually came to praise Koop for his forthright handling of the AIDS crisis.

In 1986, nearly five years after the first AIDS cases were reported in 1981, the Reagan administration finally allowed Koop to write a report on the epidemic. Many people feared Koop's report might echo the intensely homophobic rhetoric pervasive at that time. Instead, Koop rejected those views outright in the report's forward, writing, "At the beginning of the AIDS epidemic, many Americans had little sympathy for people with AIDS. The feeling was that somehow people from certain groups 'deserved' their illness. Let us put those feelings behind us. We are fighting a disease, not people."

Throughout his tenure as surgeon general, no public official did more than Koop to shift the public debate from moral politics of homosexuality and intravenous drug use to medical care, economic position and the civil rights of AIDS sufferers, according to the U.S. National Library of Medicine.

Dr. Paul Theerman, director of the Academy Library and Center for the History of Medicine and Public Health, told NCR that while Koop never shied away from his religious views, his personal views on sexual morality never got in the way of his professional calling to relieve suffering. "His vocation was as a figure of public health," Theerman said.

According to The Atlantic, Koop was known for saying to his conservative critics, "I'm the nation's doctor, not the nation's chaplain."

The current surgeon general has taken a different approach to the coronavirus pandemic, at times not only sharing his faith with the American people, but almost prescribing it.

In his April 2 appearance on Focus on the Family, Adams closed out the interview by responding to the idea that Christians don't believe in science.

"I think it's important for people to know those two things aren't mutually exclusive," Adams said. "I think at a time like this it is all the more important that we understand the importance of faith and understand that there is a higher power guiding our pathway. …

"I just want folks to understand that it's important to lean on your faith right now and we will get through this."

[Jesse Remedios is a staff writer with National Catholic Reporter's EarthBeat and former NCR Bertelsen intern. His email address is jremedios@ncronline.org. Follow him on Twitter: @JCRemedios]

This story appears in the Coronavirus feature series. View the full series.
A version of this story appeared in the May 1-14, 2020 print issue under the headline: Surgeon general talks God’s 'plan' with pandemic.