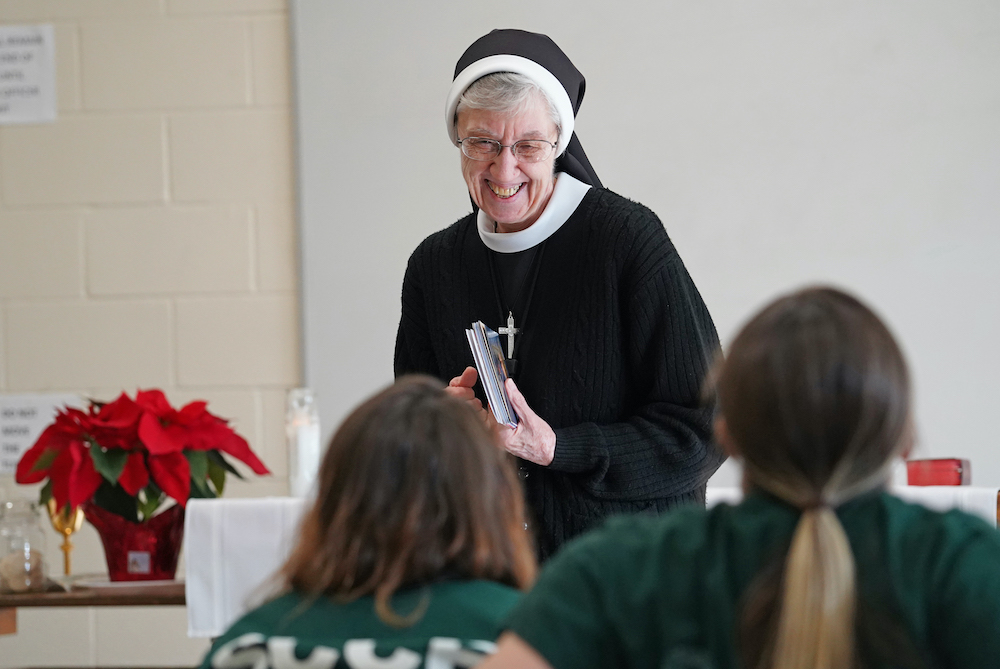 Prison chaplain Sr. Michelle Bremer, a member of the Congregation of the Sisters of the Holy Family of Nazareth, chats with female inmates following a Mass celebrated by Auxiliary Bishop Robert Coyle of Rockville Centre, New York, Dec. 19, 2019, at the Suffolk County Correctional Facility in Yaphank, New York. (CNS/Gregory A. Shemitz)

The coronavirus pandemic has reached the nation's local jails and state prisons, with both inmates and correction officers testing positive in the thousands.

Catholic prison ministers see it first-hand, with many arguing for early release for non-violent and vulnerable offenders.

Sr. Madeline Kavanagh, a member of the Daughters of Charity for 61 years, and Marvin Ray Edwards, a lay chaplain, are among them.

Until this past February, Kavanagh was a volunteer tutor and Edwards a prison minister at the maximum security Mississippi State Penitentiary at Parchman, near Jackson.

Both were in favor of early release, well before the severely overcrowded facility was put under quarantine rules due to COVID-19 concerns. In March, the governor closed a unit of the facility infamous for its bad conditions.

"There were actually two shutdowns; the first came in late 2017 following a series of riots and killings — some gang-related, some not — which triggered a since-halted federal probe of the entire prison system," said Kavanagh.

Parchman currently holds approximately 3,233 inmates, including men, women and a small number of minors. Another 3,603 inmates reside in the Central Mississippi Correctional Facility in Rankin County, near Pearl, according to a fact sheet issued by the Mississippi Department of Corrections in December.

The offenses, said Kavanagh, "may include drug possession, debtors' rulings or simply a missed appointment with one's parole officer, someone who has the power to send the person back to prison,” she said. 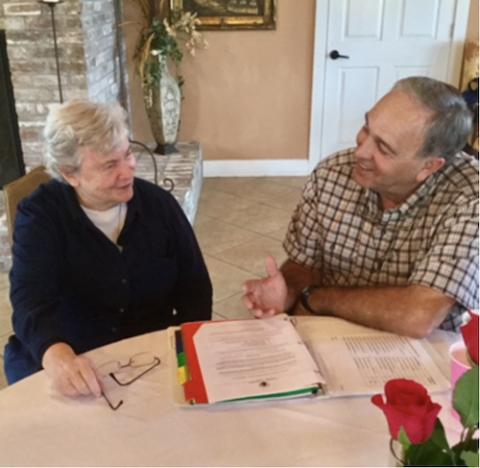 "There are also many elderly prisoners at Parchman who have been locked up so long, they don't even have enough physical strength to hurt someone anyway," added Kavanagh.

Early release for nonviolent offenders, said Kavanagh, "is acceptable, it is just, and it is doable, as long as you provide support for these people when they get out."

“The big issue is if they don't have someone on the outside, then what's going to happen to them. I have heard about one prisoner who died of the virus after the shutdown, and several others who also tested positive, but the heart of it is that we need to take them out of danger," he said.

In an April 14 article, Wall Street Journal reporters Sadie Gurman and Zusha Elinson addressed the back-and-forth between state jurisdictions that want to release inmates who are either non-violent or elderly, and prison authorities who maintain they have broad discretion to decide.

A recent memo from U.S. Attorney General William Barr to federal prosecutors, reported the Wall Street Journal, instructed them to "continue as zealously today as you would have before the pandemic began" with pre-trial detention for those considered to be a safety threat.

Barr's memo also told those same prosecutors to consider the medical risks of overcrowded prisons during a pandemic.

Derran Broyles, administrator for the Scott County Detention Center, located 25 miles north of Lexington in Georgetown, Kentucky, told NCR he is concerned about the safety of inmates during the pandemic.

Broyles said that the state has restricted non-essential personnel from entering the building, closed the lobby to the public, suspended visitations and restricted jail entry to essential persons — attorneys, vendors, contractors, staff arresting officers, volunteers and instructors — with everyone having their temperature checked and their hands sanitized upon entry.

Inmate court appearances are now done via video, but inmate mail and the inmate community work program have been totally suspended.

Any person with a temperature of 100.4 degrees Fahrenheit or greater, or who exhibits respiratory distress, is refused entry. Staff can wear cloth masks while working, but if they believe exposure to the virus has occurred — to them or a family member — cannot work for several days. Inmates over 60 and those with underlying health issues are isolated away from the general population.

The Scott County Detention Center was built 39 years ago to house 76 prisoners. It now houses up to 150.

Stacy Rector, a Presbyterian minister and executive director for Tennesseans for Alternatives to the Death Penalty in Nashville, told NCR that early release is a needed health response to the current crisis.*

"We should all be concerned about the health of both inmates and correctional staff in our jails and prisons during this pandemic," she said.

Bettie Kirkland, executive director of the Nashville chapter of Project Return, an agency focused on helping former inmates, said that prisons are not built for social distancing.

"Because of this, we favor early release, but there needs to be a recognition of the terrible destitution that people face immediately upon their release. … There needs to be sufficient wraparound support. They [the ex-inmates] need shelter, food, basic assistance and employment opportunities. Otherwise, it [the release and pandemic] is not survivable for them, and it's inhumane," she said.

Deacon James Booth of the Nashville Diocese, director of Prison Ministry at Riverbend Correctional Center, a maximum-security prison in Nashville and two other facilities, hasn't been able to make his visits during the pandemic.

Before the COVID-19 shutdown, said Booth, he saw the inmates twice a week. "Now it feels strange not to have them in my life," he said.

The effects of Booth's absence — and those of other ministers — have been devastating, he said.

"The guys miss their regular faith service; they also go without Communion and Sunday Mass, plus we had to cancel an upcoming retreat-style, all-day faith discussion with [Nashville] Bishop Joseph Mark Spalding celebrating Mass,” said Booth.

Booth said that early release needs to be done with concern for inmates' security.

"Because look at what we are releasing them out into: They will need to get a driver's license but can't, and they will want to get a job, but cannot because everything is closed," said Booth.

Deacon Paul Root of the Diocese of Lexington, Kentucky, was ministering to inmates at the Blackburn Correctional Center, a minimum-security prison outside of Lexington, until early March.

"It [the virus] hit us so quick that the reality did not have time to register on me, the other two deacons who serve there, and our lay person," said Root. A member of Cathedral of Christ the King Parish in Lexington, Root has ministered at Blackburn for three years.

Blackburn is an all-male prison for inmates on the tail-end of their sentences. There are no fences. Root strongly emphasized the importance of pastoral visits, noting that "when someone is incarcerated, they have had everything taken away from them, so it's very appropriate our being the face of Christ, and performing one of the corporal acts of mercy through our visitation."

When asked about the possibility of early inmate release — to both ease overcrowding and scale back potential mass contamination — Root did not have an easy answer.

"You have people who are in there [prison] for a reason, but in this case, anything that will reduce the population and a chance of infection is worth trying — if that person is quarantined before being let out," said Root.

Root noted, "You have to look at the victims, and consider how they feel — about any crime — be it a violent one, or a non-violent one such as burglary, seeing a guy who broke into your home suddenly being cut loose."

Deacon Eddie Grider, director of prison ministry for the Lexington Diocese, is working on programs that assist volunteers coming into prison ministry.

While strongly opposed to early release of violent offenders during this crisis, Grider feels differently about people who are locked up for nonviolent offenses.

"During this time, we need to look hard at what some people are in for, and if overcrowding is a safety issue, set a time for their release; but we must be very diligent due to the close confinement they are in," said Grider.

*Correction: An earlier version of this story named the Tennesseans for Alternatives to the Death Penalty organization incorrectly. Stacy Rector's position and organization has been updated.