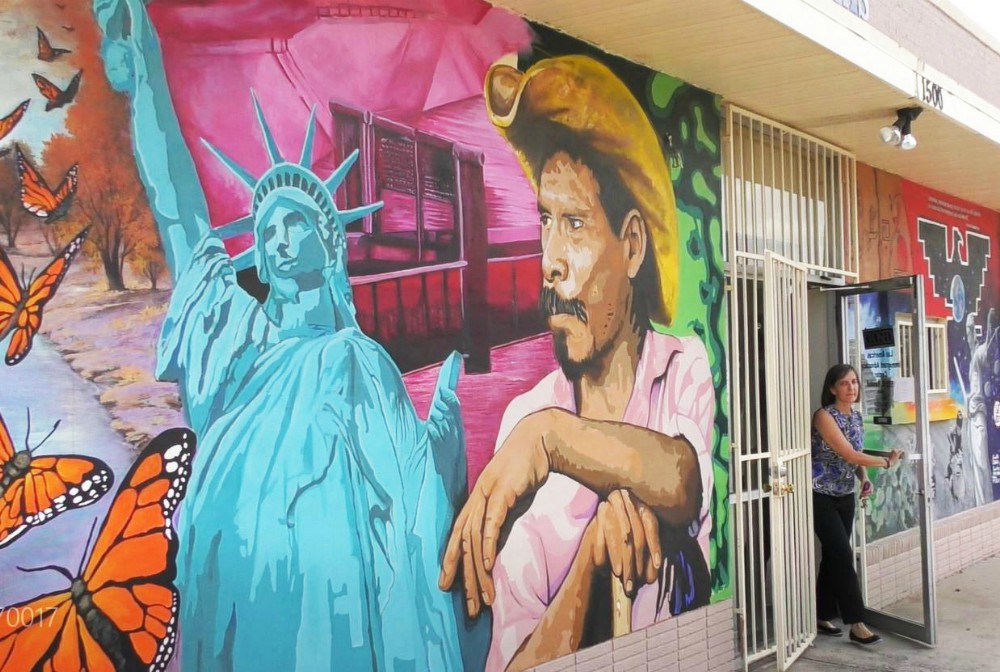 Editor's note: Following is a dispatch from the Maryknoll Lay Missioners, featuring an interview with Heidi Cerneka, a Maryknoll lay missioner who works as an immigration attorney at the border.

Heidi Cerneka works as a pro bono attorney for detained migrants through Las Americas Immigrant Advocacy Center in El Paso. Among others, she is representing the immigration cases of two women who, along with four other asylum seekers, were released from detention on Wednesday, April 29. The release was the result of a federal lawsuit the women had filed five days earlier against Immigration and Customs Enforcement.

Rosa, 25, is one of the two clients of Cerneka's who were released (last names of asylum seekers are not identified because most fear persecution in their home countries). A former law student from Guatemala, she was forced to flee death threats and violence because of her religion and because of her ethnicity.

She came to the U.S. to ask for asylum and protection and was trapped for 10 months in Ciudad Juárez, Mexico, under the Migrant Protection Protocols (commonly known as the "Remain in Mexico" program).

Eventually she was "allowed" out of Mexico into the U.S. and immigration detention. In detention in El Paso, she developed multiple health issues. On April 7, Rosa asked for humanitarian parole, release from detention granted by ICE, so that she could pursue her asylum case (already delayed 16 months because of U.S. policies and restrictions) outside of detention. The risk of contracting COVID-19 in a detention center alarmed her. Her request was denied.

During the past few weeks, when Rosa complained of her health issues and symptoms and asked for medical attention, she was told to just "drink water."

On April 20 Rosa began coughing up blood, and she demanded to be tested for the virus. She had been separated for observation along with 11 other women who have also shown COVID-19 symptoms. She found out on April 27 that she has tested positive for the virus.

Cerneka said, "Rosa told me the other day, 'When I left my country, I had no health problems. Now I have COVID-19 and many other symptoms, and I am only 25.' She fled Guatemala in fear for her life, and because of our punitive and severe anti-asylum policies, now fears for her life because of our detention system."

The other client of Cerneka's who was part of the lawsuit is Mariela, who is 60 years old and has a thyroid disorder and other health issues.

"She called me crying because she was depressed and scared," Cerneka said. "She has family right here in El Paso. She has visited her fiancé every year since 2012 on a tourist visa. She never overstayed or violated the requirements of the visa. But earlier this year, after an afternoon visit across the border with her fiancé, she was accused of working in the U.S. when she presented her passport and visa at the border checkpoint upon return."

Within a day, Mariela was ordered deported, had her visa revoked and a five-year ban from visiting the U.S. placed on her. She was put in immigration detention to await deportation and held there for 10 weeks, while fighting her expedited removal order with representation from Cerneka.

"In no way is she a threat to society," Cerneka said. "She is not even at risk of trying to stay here undocumented; she owns businesses in Colombia. She was, however, at risk of catching COVID-19 and dying in detention. Even if her age and her health concerns did not increase her risk, anxiety and depression at being in 'jail' still contributed to reduced immunities!"

Rosa, Mariela and the other women who sued ICE had been held at ICE's El Paso Processing Center, where, as of April 30, nine cases of COVID-19 have been confirmed — eight detainees and one ICE employee. The six women, who are in vulnerable, high-risk populations due to their age and medical condition, had been in close contact with other detainees who had contracted COVID-19.

They had sued for their release because, they argued, ICE was endangering their lives and was not following the COVID-19 safety guidelines issued by the Centers for Disease Control and Prevention for detention centers.

"People who have never committed a crime in their lives, who came to the United States to ask for protection and asylum, are now being detained in tinder boxes just waiting for a match," said Cerneka. Prisons and detention centers — like shelters and hospitals and other places where people are in close living quarters — are "known to be places where infections spread at lightning speed once they enter," Cerneka explained.

'People who have never committed a crime in their lives, who came to the United States to ask for protection and asylum, are now being detained in tinder boxes just waiting for a match.'

In recent weeks, prisons and jails in the U.S. and many other countries have been looking at ways to reduce the coronavirus threat for their incarcerated populations. Some have begun to release people who have committed nonviolent crimes or are still waiting for trial, and who fit certain criteria, including age and health risks.

But according to Cerneka, at least as far as El Paso is concerned, immigration detention for people who are not dangerous but living in close proximity has remained largely unchanged.

Asylum seekers in ICE detention are not charged with crimes. They are in custody while their immigration status is determined in the courts. ICE has the discretion to release detainees who don't pose a threat to the community and aren't flight risks.

The more than 300 detainees held at the El Paso Processing Center are part of almost 30,000 people still detained by the agency. As of April 30, ICE reported 490 COVID-19 infections among its detainees and 36 cases among its staff. But the number is undoubtedly much higher. Testing in ICE detention centers has been very limited. Overall, only about 3% of the 30,000 immigrants detained by ICE have been tested. Of those, almost 50% have been positive.

Federal judges have ordered some ICE detainees in other facilities released because of COVID-19 vulnerability, but the lawsuit filed on behalf of the six women in El Paso is believed to be the first time that ICE has settled such a lawsuit. In mid-April, the agency said that nationwide it had released some 700 people at high risk of COVID-19 complications.

The lawyers for the six women and ICE settled the lawsuit just minutes before a hearing that had been set for Tuesday. ICE agreed to release the women from its custody, and the women have agreed to comply with the ICE "alternatives to detention" program. Upon release, the women were tested for COVID-19, quarantined themselves and were able to access medical care and to reunite with their loved ones in a safe manner. 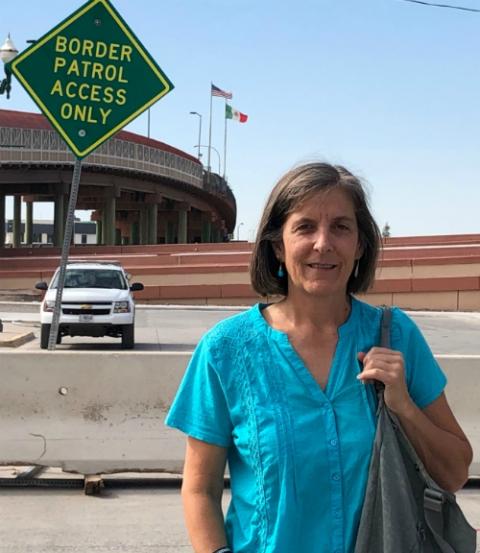 Heidi Cerneka on the El Paso side of the Paso del Norte bridge, which is one of the busiest ports of entry from Mexico to the United States (Meinrad Scherer Emunds)

For the next two weeks, they are staying at El Paso's Annunciation House, which has set up a COVID-19 protocol and has acquired full-body PPE suits. Ruben Garcia, the shelter's director, told El Paso Matters that they were prepared to take in more ICE detainees if the agency agrees to an orderly release as part of efforts to slow COVID-19 infections.

Following her clients' release on Wednesday, Cerneka said, "Today we celebrate their release, but they should never have been detained. It will take years to recover their health, their sense of trust and safety after the physical and emotional trauma and damage caused by the unnecessary custody. Justice delayed is justice denied. Today's release of Mariela and Rosa is extremely delayed justice for them."

She added, "Would that they were released because our government realized that justice mandates it. ... They were released because it is easier for ICE to negotiate with the organizations that filed the suit than to respond in federal court and risk losing and risk even more negative publicity. This is democracy — that we can hold the government responsible in a court of law and see results. But the democracy we want defends the right to justice from the start and in the cases of Mariela and Rosa and others like them, to never be put in immigration detention."

Christopher Benoit, one of the attorneys representing the women, said, "We are proud to represent such brave women. They stood up because ICE was not protecting them or the women around them. Release was the only safe outcome for these women. While we remain concerned for those who remain detained, we expect ICE to maintain the improvements in conditions at [the detention center] that were hastily put in place after the lawsuit was filed."

According to Cerneka, "Detainees in ICE custody in the El Paso area are in free-fall panic, and the staff should be as well. Knowing what we know about this virus and the alarming numbers already, detained migrants should be released and decisions should not be made based on political strategies but on justice, public health and humanitarian concerns."

In a letter to the local heads of immigration enforcement agencies, six state lawmakers from El Paso last week expressed their support for such an action. "Due to the increased spread of COVID-19, we urge ICE and [U.S. Customs and Border Protection] to coordinate with local governments, public health agencies, hospitals and other area stakeholders to plan for both the release of nonviolent detainees as well as protocols for spread of COVID-19 within your facilities," said the letter, which was made public on April 22.

On April 27, after hearing from a number of experts, the El Paso Commissioners Court voted 4-1 in favor of a resolution calling on ICE and CBP to prioritize the immediate release of nonviolent migrants.

Cerneka has been a Maryknoll lay missioner since 1996 and previously served in ministries with incarcerated women in Brazil and Kenya. "Those of us who are Christian profess to being an Easter people," she said. "We believe in hope and the Resurrection, even when we are stuck in Good Friday. So I choose to believe and will continue to struggle."

She added, "As people of faith, we must do what is right for our sisters and brothers, for our neighbors, and not just protect our own households. We must trust in the God that guides us, and we must seek justice for every one of God's beloved people."