Panelists participate in a March 26 discussion at Holy Trinity Catholic Church in Washington on "Faith and the Faithful in U.S. Politics." Pictured from left to right are Peter Wehner, a senior fellow at the Ethics and Public Policy Center in Washington; Joshua DuBois, former executive director of the White House Office of Faith-based and Neighborhood Partnerships; John Carr, panel moderator and director of the Initiative on Catholic Social Thought and Public Life at Georgetown University, which co-sponsored the event; Jocelyn Kiley, associate director of research at the Pew Research Center; and E.J. Dionne, a Washington Post columnist and professor at Georgetown's McCourt School of Public Policy, which also co-sponsored the gathering. (CNS/Grace Withers, courtesy Georgetown University)

The Faith and the Faithful Series at Georgetown University — part of a larger series that drew about 3,000 people to more than a dozen gatherings this past academic year — featured voices from the left, right and middle discussing the place of religious faith and the role of those who consider themselves religious in American politics.

At three events over the spring and early summer, evangelical leaders, political strategists, pollsters, journalists and labor leaders shared the stage. All wrestled with the questions of whether the two dominant political parties have a religion problem, the ways that current politics are changing religion, and how religion is changing politics.

As expected, there were no easy answers and only a few heated exchanges — a refreshing change from the shouting and name calling so prevalent on Twitter and cable news. The speakers touched on immigration, abortion, the culture wars, differences between party leaders and party faithful, and President Donald Trump's puzzling — to liberals — appeal to evangelical Christians.

"It far exceeded our expectations," said John Carr, who directs the Initiative on Catholic Social Thought and Public Policy, which sponsored the events. "There is a hunger for what we have to offer."

Carr moderated each of the panel discussions, which were co-sponsored by Georgetown's Institute of Politics and Public Service and the nonpartisan Democracy Fund.

He added, "People need encouragement and sustenance. If you're a pro-life Democrat or a pro-immigration Republican, you can feel pretty lonely."

As if to illustrate that point, at the June panel on the Democratic party, Elizabeth Podrebarac Sciupac, a research associate at Pew, presented data showing that while 30 percent of Democrats identify as religiously unaffiliated, the rest do identify with their faith and guiding religious principles, which often puts them at odds with leadership of the Democratic party. 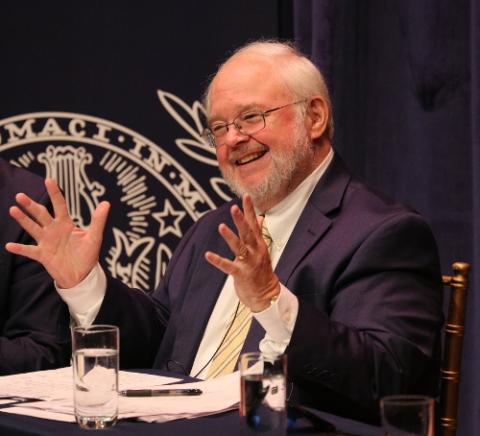 Carr seconded that sentiment. He refers to himself as "politically homeless" and believes that many Catholic Democrats feel similarly. He said he sees the two parties "walking away" from the rich moral resources that the Catholic Church and religious traditions generally have to offer.

To that end, data presented at the Republican Party panel in May showed nuances among Trump's evangelical base, whose support for his extreme positions on immigration and social issues goes down the more they attend church. On providing a path to citizenship and making it easier to immigrate, for instance, the difference between church-goers and non-church-goers is 20 to 30 points with 74 percent of those who seldom go to church holding a hardline position on immigration.

E.J. Dionne, columnist for The Washington Post and senior fellow at the Brookings Institution, took part in a dialogue in March on U.S. politics but wasn't able to attend the other two in the series.

"My feeling is that the Catholic Church is so divided by politics at this point that anything that creates some sense of dialogue across the lines of division is useful," he said of the series.

Dionne sees divisions among liberal and conservative Catholics, and believes that Pope Francis presents a real challenge for the latter — "he is clearly in a different place than they are." But Dionne told NCR that he also sees common ground, particularly on immigration and the growing importance of Hispanics in the church.

"It is a very big tent church," Dionne concluded. "Just facing up to that is a useful thing."

Social Service Sr. Simone Campbell, executive director of the Catholic social justice lobby Network, wasn't able to make any of the talks but is familiar with the series and its efforts to advance a dialogue among thoughtful people who care about both religion and politics. She called for more discussion of how believers put their faith into action, as an expression of their values.

Campbell said that our values — how we care for our community and the common good — should be at the heart of our political discourse today. "That is the conversation that I think is critical. And anything that helps us break out of the narrow frame that religion has only one issue — called abortion, and that's the entirety of the conversation — is a good step forward."

Chris Crawford, a governance program associate at the Democracy Fund, was pleased with the way the series unfolded.

"We are interested in promoting conversations that might not otherwise happen," said Crawford, who attended the first two panels. "We were hoping for substantive conversations about the role of faith in our democracy, with a particular focus on faith as a way to bridge divides and overcome hyper-partisanship. And I think some of those conversations happened."

Jesuit Fr. Kevin Gillespie, pastor of Holy Trinity Parish, across the street from Georgetown, attended the first in the series, which was held in the church hall.

"From a faith perspective, what I like to believe is that a healthy religion can support an intelligent, healthy political debate, whatever one's leanings, democrat, republican, even a Trump outlier," said Gillespie.

He had just watched students from the parish elementary school at a debate practice, tutored by Georgetown students. Gillespie admired the discipline and rhetoric the students demonstrated. "That's what we need in our culture now," he said, adding "and we're not getting it." 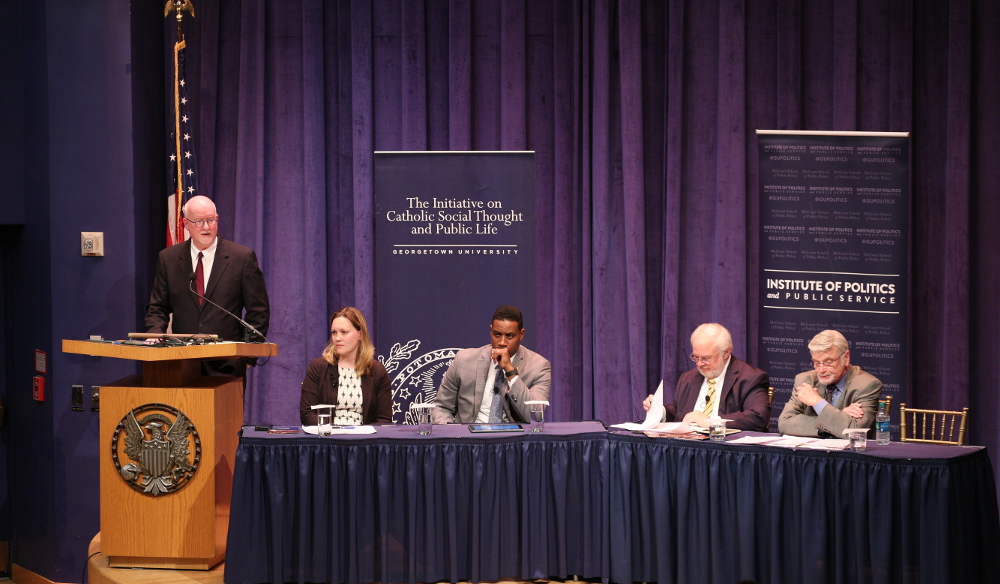 Still, many were hopeful and energized after attending some of the sessions.

"The combination of our location in the nation's capital and John Carr's background at the U.S. Conference of Catholic Bishops makes this program a natural place to address issues of faith and politics and polarization," said Susan Gibbs, a Catholic communications consultant who attended two of the events. "It is troubling how much people talk past each other and label each other these days. We are called to be evangelizers, but you can't evangelize if you slam the door before you start."

Having the tradition of Catholic social teaching as a guide during such polarized times is an asset that Carr said the faithful must not forget. And they must not forego their conversations, either, although it's tempting.

"It's a paradox," Carr said. "It's a great time to talk faith and Catholic social thought, but it's a brutal time to talk politics."