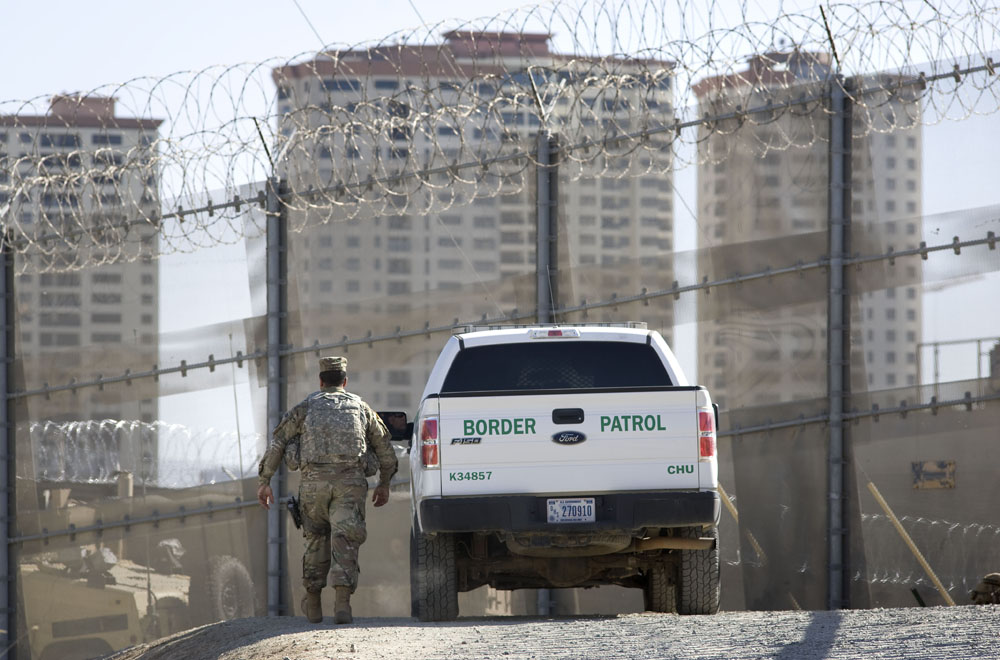 A U.S. Army soldier walks past a Border Patrol vehicle and concertina wire Nov. 9 in San Diego. The soldier is part of a deployment of troops to the border ordered by President Donald Trump in response to a caravan of Honduran migrants traveling to the U.S. border after fleeing violence in Central America. (CNS/David Maung)

Despite a last-minute, stopgap spending bill to allow lawmakers to pay their respects to former President George H.W. Bush this week, conflicts over proposed budget increases to fund controversial measures at the border still threaten a possible, partial government shutdown just before the holidays.

Lawmakers had been facing a Friday deadline to resolve conflicts over a longer-term spending package that President Donald Trump has said must include funding for a border wall. The stopgap bill would give them two more weeks to come to an agreement after Bush's funeral on Wednesday.

But an interfaith group is still planning a press conference today to address the border funding issue, and a Catholic social justice lobbying group is pushing for the Senate version of the appropriations bill for the Department of Homeland Security, because it contains $1.6 billion for border fencing, compared to the House version, which provides some $5 billion requested by Trump for the border wall.

"We fought to get it as low of a number as possible, and I wish it was lower," said Social Service Sr. Simone Campbell, executive director of Network, a Catholic social justice lobbying organization, which originally pushed for no increase to border security funding.

A November letter to all members of Congress, signed by 38 national, faith-based organizations, expressed opposition to "the existing, unconscionably high levels of unchecked and unaccountable spending on deportation agents, detention beds, and militarized border enforcement included in the Department of Homeland Security's budget" and called for Congress to "stop the unrestrained funding for, and expansion of powers to, the agencies fueling family separation and incarceration."

That letter was signed by several Catholic groups, including Network, Pax Christi, the Leadership Conference of Women Religious, Maryknoll Office for Global Concerns, National Advocacy Center of the Sisters of the Good Shepherd, Ignatian Solidarity Network, Franciscan Action Network, Congregation of Our Lady of Charity of the Good Shepherd, Sisters of Mercy, Columban Center for Advocacy and Outreach, Scalabrini International Migration Network and others.

A Dec. 3 letter to Senate and House leaders originally written by Faith in Action also requested a reduction in funding for DHS, U.S. Immigration and Customs Enforcement and Customs and Border Protection, and no new funds for the border wall. It was delivered Dec. 4 in an action helmed by the Interfaith Immigration Coalition.*

"This will slow the socially and environmentally destructive efforts to militarize our southern border regions, and will hold accountable the immigration enforcement agencies that are traumatizing families and communities across our country," the letter said.

That letter was signed by 800 clergy and faith leaders, including many Catholics.

The border wall is a Trump campaign promise, which he originally indicated would be funded by Mexico. In addition to funding for the wall, the DHS bill provides increased money for detention of immigrants and asylum-seekers, which Campbell called "an immoral funding mechanism for private, for-profit prisons."

"It's a bad use of our tax dollars and does nothing to keep us safe," Campbell told NCR. "It does not deal with the real issue, which is people fleeing persecution in their home countries."

Tensions at the border resulting from the "zero tolerance" policy on illegal immigration — including family separation and demonizing of the "caravan" of asylum-seekers from Central America — has been manufactured by the Trump administration for political purposes, said Network senior government relations advocate Tralonne Shorter.

"We are outraged at how our country 'welcomes the stranger' by using tear gas and putting families in cages for simply coming to our country," Shorter said, adding that Network instead urges a "more compassionate" approach to addressing immigration and border security enforcement.

Increased funding for measures that "villanize" immigrants are ineffective and immoral, Shorter said.

Both the Senate and House bills have passed out of committee, but have not yet been voted on by the full bodies. If lawmakers cannot come to an agreement, and fail to pass another continuing resolution, the portion of the government covered by the spending bill would shut down — except for those programs deemed necessary and essential, as much of DHS is, Campbell said.

An additional delay could push the matter into the new year, when Democrats take over the majority in the House.

Six other appropriations bills are also being held up, including ones that fund the Commerce and State Departments, the 2020 census and the Department of Housing and Urban Development, among other programs. Congress could pass those bills as part of an omnibus package, Shorter said.

"There's no reason for Congress to hold those bills hostage over a manufactured political fight called by the president in the final hours," she said.

Campbell cited Catholic social teaching that all people are created in the image of God and deserving of dignity and the right to live in safety as underlying Network's position on immigration. She also noted Pope Francis' repeated references to the dignity of immigrants and asylum-seekers.

"We as Catholics must welcome the stranger," she said, adding that current policy that demonizes immigrants is "morally reprehensible and just plain wrong."'

"It really is living in darkness to have a federal policy that is so damaging to innocent people," Campbell said. "But that only underscores why we as Christians, as Catholics, have a responsibility to live the Gospel to change this."

*This story was updated Dec. 6, 9:05 a.m. CST to include that the Dec. 3 letter was originally written by Faith in Action and delivered Dec. 4 in an action helmed by Interfaith Immigration Coalition.