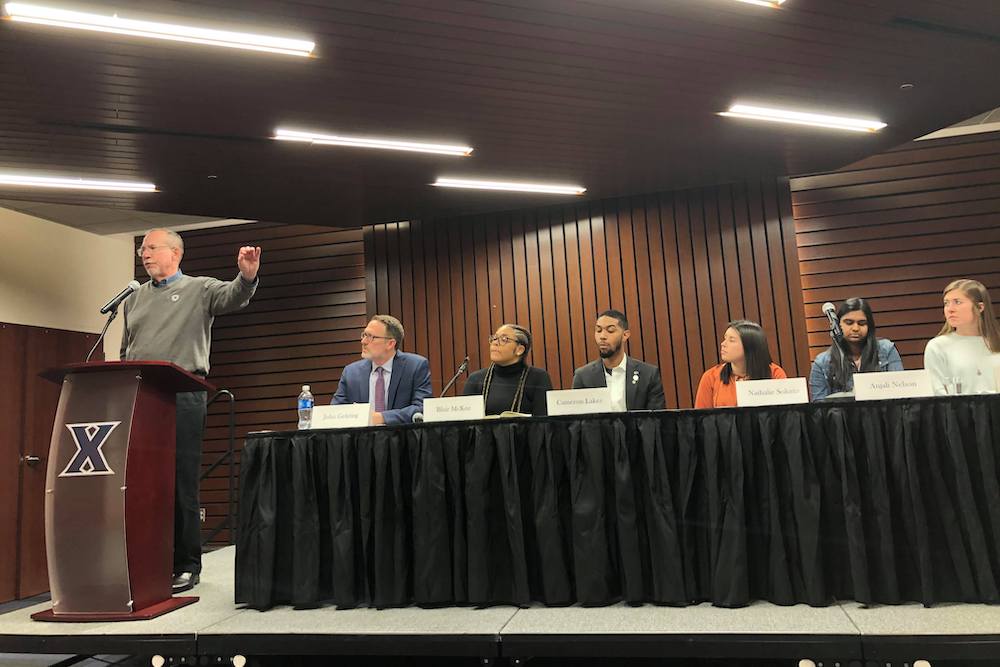 Over two days in the spring of 1921, mobs of whites attacked blacks and destroyed black-owned properties in Tulsa, Oklahoma. Dozens were killed and hundreds were injured. Compounding the tragedy of what occurred, said Graham, is that the incident has been largely forgotten in some segments of America.

"I'm sure that this story has been told and kept alive by a lot of African American people," he said. "Doesn't it lead you to wonder how many other stories have been erased, though perhaps not of this magnitude? Doesn't it invite us to ask the question, 'How do we erase things?' "

"I think it is really important for us to gather on a night like this so that we can collectively learn to see," Graham added. "That's really what this is about, to open our eyes to the realities our brothers and sisters experience on a daily basis on our campus, in our community and in our country."

Graham's words kicked off a two-hour discussion by a diverse panel of five Xavier students about their experiences regarding race. The conversation was facilitated by Faith in Public Life, an interfaith network of more than 50,000 religious leaders and advocates. Faith in Public Life Catholic Program Director John Gehring moderated the panel. 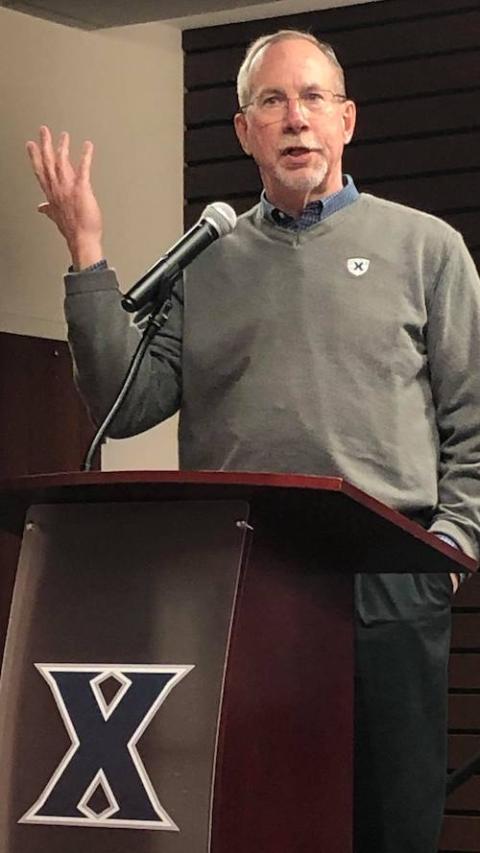 Panelist Blair McKee, an African American woman and senior at Xavier, attended Catholic schools from third grade onward, often finding herself the as one of the few people of color in each school. She quoted the U.S. Conference of Catholic Bishops' 1979 pastoral letter on racism to explain her viewpoint on how race and faith intersect.

" 'Racism is not merely one sin among many; it is a radical evil that divides the human family and denies the new creation of a redeemed world," McKee said. "To struggle against it demands an equally radical transformation, in our own minds and hearts as well as in the structure of our society.' I really appreciated that quote because that's really how I feel."

"We really want to lift up the voice of young Catholic activists and other activists of faith," Gehring said. "We think the voices of advocates are just really important for changing minds and hearts and that's the key to changing policy. Particularly at a time when people of color and communities of color are under attack with rhetoric and policy, we think it's more important than ever to give young people these kinds of platforms."

Gehring asked the five students on the panel — McKee, Cameron Lakes, Nathalie Solorio, Anjali Nelson and Molly Onders — about their backgrounds, how they experienced race and, in particular, how they have adjusted to living "in a political and cultural moment right now with white supremacy politics, anti-immigrant policies and communities of color under attack." Gehring described these conditions as being exacerbated by the election and administration of President Donald Trump.

"We've only been in college during this time," said Solorio. "I vividly remember sitting in my dorm room in Brockman Hall looking at my computer screen and just sobbing as I realized how much [the election] impacted my Latinx community. Then I thought about my family members that were Latinx but also part of the LGBTQIA community or were also undocumented.

"I thought about how in the time that we're living there is so much need for intersection and solidarity and kinship and to work across communities to seek faith and justice," she added. "There is so much systematic injustice to correct in our country right now."

Gehring also asked about how faith impacts the students' relationship with matters of race. For Onders, the only Caucasian on the panel, the Catholic Jesuit education she has from Xavier and her own background have allowed her to become "uncomfortable" with systemic and interpersonal racism in America.

"Your faith should make you uncomfortable with the way that things are," she said. "If I do believe the things that I believe, and say that I am a Christian, then it should motivate me to be uncomfortable.

Solorio, who identified as Latinx, noted a memory from her youth when her Jesuit pastor talked specifically about the intersection of being Latinx women and being undocumented.

"That homily has always resonated with me," she said. "Growing up I was in Catholic spaces, but I was never really doing the 'action' part. At Xavier, I really identified what the Jesuit traditions of standing in kinship and solidarity with people really stands for. I find myself going out and living those things that all my life I was hearing but wasn't really doing the action part."

Nelson, a daughter of Indian immigrants, said she brings her faith in in Jesus to the public arena.

"I've learned that the character of Jesus in the Bible is a very political one who stands up for the marginalized and one who was marginalized himself," she said. "He shouldn't be removed from our politics and the way we treat other people."

The students were given a chance to speak to what Xavier University has done well, and how it could improve the experience for students of color. According to the website Data USA, Xavier students are 75.7% white, 5.17% African American, and 3.45% Hispanic or Latino. The university operates an Office of Institutional Diversity and Inclusion, a Center for Diversity and Inclusion, a Center for Faith and Justice and facilitates 15 identity-based clubs on campus including the Black Student Association and Hispanic Organization and LatinX Awareness (HOLA) club.

The university does put forth a lot of effort, McKee acknowledged. "But I also know it doesn't always trickle down to the lived experience of black students and students of color on campus. It's very hard for me because I know the intention is there, but I also know that students don't always feel that for a variety of reasons.

"We're here as students first, we're here to learn. We're not necessarily here to undo all the systematic racism that is at Xavier, we're here to get a degree. So, when you are trying to get your degree and you're sitting in the classroom and you're being micro-aggressed by a professor whether intentionally or not, it really does throw off your whole day. I have conversations with international students all the time who say the professor doesn't even make an effort to pronounce their names. It's little things like that which really shape your experience in college."

A theme among the panelists was that their time at Xavier has led them to be more confident in their identities and more sensitive to the needs of others.

"One thing Xavier has taught me is that my career and the other things I've learned here should not be separate," Onders said. "I shouldn't consider working for social justice as a side job or just when I have extra time."

[John Stegeman is a freelancer from Cincinnati, Ohio, and editor of Glenmary Challenge magazine. ]