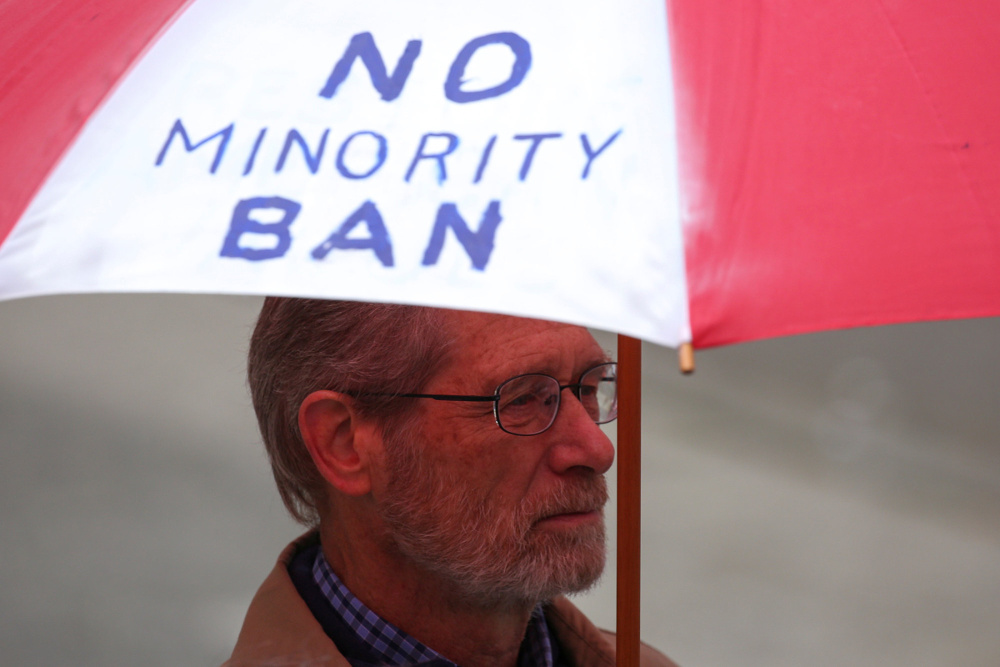 A man holds an umbrella during a protest in Seattle May 15 against an earlier version of President Donald Trump's travel ban. (CNS/David Ryder, Reuters)

A federal judge in Hawaii Oct. 17 blocked the Trump administration's expanded version of its travel prohibitions issued in late September.

The new ban now includes travel prohibitions for some Venezuelan government officials and their immediate family, as well as nationals from North Korea, the Central African country of Chad, Syria, Libya, Iran, Yemen and Somalia. The new restrictions were to take effect Oct. 18.

With the addition of North Korea and Venezuela, some say the administration was hoping to avoid previous charges that it is targeting Muslims from entering the United States, which the president had told his supporters he would do while campaigning.

In his decision, Watson said the latest ban "suffers from precisely the same maladies as its predecessor: it lacks sufficient findings that the entry of more than 150 million nationals from six specified countries would be 'detrimental to the interests of the United States.' "

On Oct. 10, the U.S. Supreme Court in a one-page order dismissed an appeal in one of the legal challenges of President Donald Trump's now-expired travel ban.

The Trump administration had asked the court to drop the case after Trump signed the new expanded version in late September. Release of the new version effectively made the appeal moot, ruled the justices, who also said, "We express no views on the merits."

A separate case before the Supreme Court challenging the earlier ban is from the 9th U.S. Circuit Court of Appeals in San Francisco. That case originated at the court in Hawaii where Watson serves; that District Court is in the 9th circuit's jurisdiction.

A three-judge panel of the San Francisco-based court unanimously ruled that the administration's revised travel ban affecting people from six primarily Muslim-majority countries was too strict. The case is still pending because it involves a ban on refugees worldwide that does not expire until later in October.