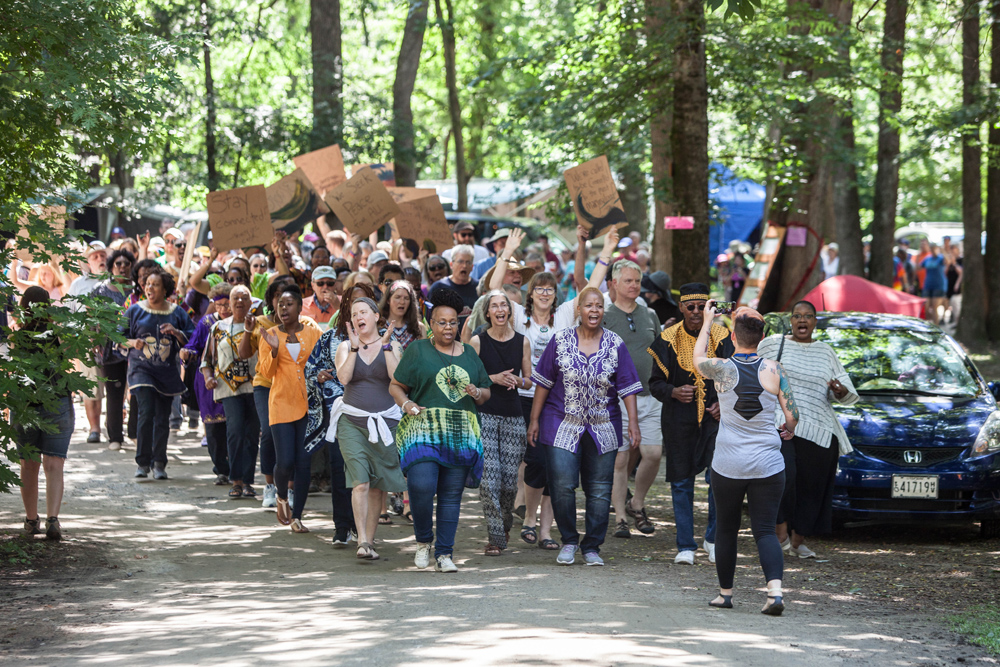 Participants march in a parade as part of the 2017 Wild Goose Festival's closing ceremony. (Creatista/Scott Griessel)

The town of Hot Springs, North Carolina, has a population of 560 people. It sits on the banks of the French Broad River, tucked deep into the Appalachian Mountains along the state's far west border. Every July, right in the heat of North Carolina's sweltering summer, upward of 4,000 people from all corners of the country trek to this tiny town for a music festival that some call the "largest progressive gathering footprint in North America."

When asked how they define "progressive," Jeff Clark, president and producer of the Wild Goose Festival, the aforementioned gathering, gave a hearty laugh.

"Our subtitle is 'Spirit, Justice, Music and Art,' " he explained. Notice how spirit and justice come before music and art? "Our gift is that we convene people with a purpose of having conversation, the only condition of which is civility. So we're going to have a conversation about all the issues that folks need to bring to the table around justice."

Clark, who is also the director of graduate studies in information systems at Middle Tennessee State University, boiled the Wild Goose Festival's "progressive" elements down to two essential components: "justice" and "inclusivity."

Wild Goose Festival is a music festival with a purpose. It began in 2011 when a group took inspiration from the United Kingdom's Greenbelt Christian music festival and looked to launch its equivalent in the U.S., dedicated to American social justice issues. Since then, the Wild Goose Festival has used an annual weekend of music and speaking performances, conversations and storytelling, as tools toward a larger goal of inspiring people, from whatever background they may come from, to go out and make the world a better place.

It's much closer to the "three days of peace, love and music" of Woodstock than it is to the luxurious, consumer-driven Coachella. Except, instead of just three days, the Wild Goose Festival folks aim for 365.

"This nourishes value-based action," Social Service Sr. Simone Campbell, a former speaker at the festival and leader of the Catholic social justice lobby Network, said. "It's individualism and isolation that I believe is sucking the life out of our nation and we have to change it, and so supporting a community based on values — you're only saving our nation." 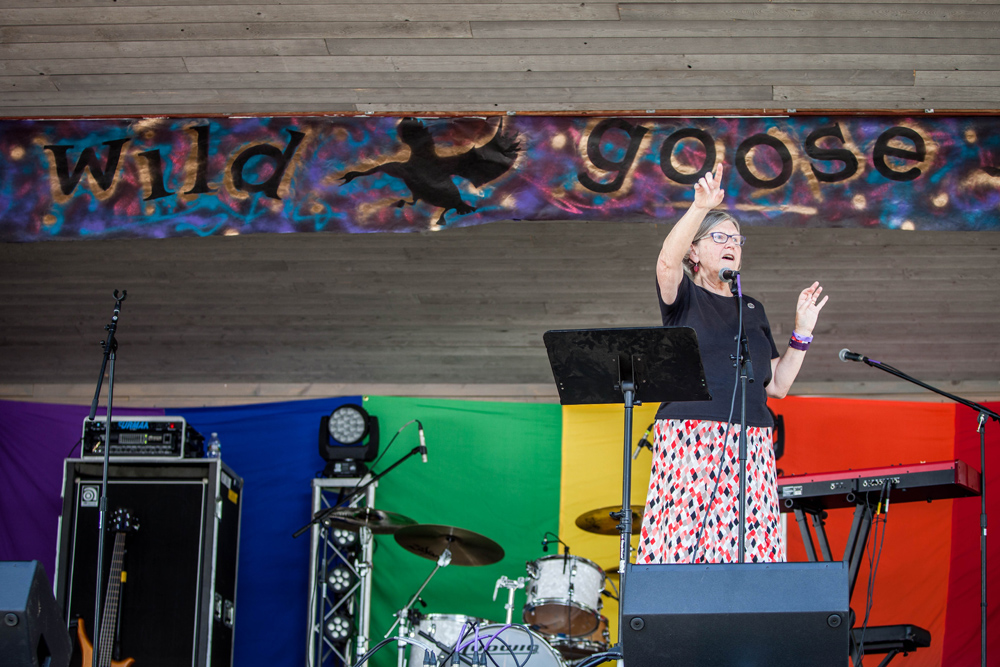 How does a single festival, over the course of just a few days each summer, inspire so much action and build such profound community?

"We really have people coming here who want to change the world," Wild Goose board member Terry Gonda told NCR. This includes people of all ages and "all walks of life." It encompasses a racially diverse crowd, as well as many folks from the LGBTQ community. Some people are connected to a religious institution, some are moving away from their evangelical or fundamentalist church, some are searching and some don't have a formal faith life at all.

And, inclusion being at the core of Wild Goose Festival, every voice is respected. This not only improves discussions, but it creates an inviting atmosphere and safe space for all. Gonda said that, "for most people," attending Wild Goose Festival feels like "coming home."

"You can't force community but you can certainly reduce the barriers that prevent it, you can certainly include people that are gifted in it, and you can provide direction and production insight in ways to facilitate it," Clark said. "We're starved for connection."

For nearly a decade now, the primary method by which Wild Goose Festival has facilitated community building is by providing ample opportunities to its attendees — who are more participants than guests — to "co-create." According to the festival website, co-creation means "to not be simply a passive observer but to be an engaged collaborator." It's a simple truth at Wild Goose Festival that improving the world requires teamwork.

In total, Wild Goose Festival has 15 tents for performances. Some are dedicated to art, some for interviews and storytelling, some host speakers like theologians or preachers, and some for, of course, entertaining music performances. For its second straight year, the festival, scheduled for July 11-14, will include a "Convo Hall" tent to foster productive dialogue around important social justice issues that all guests are invited to participate in. 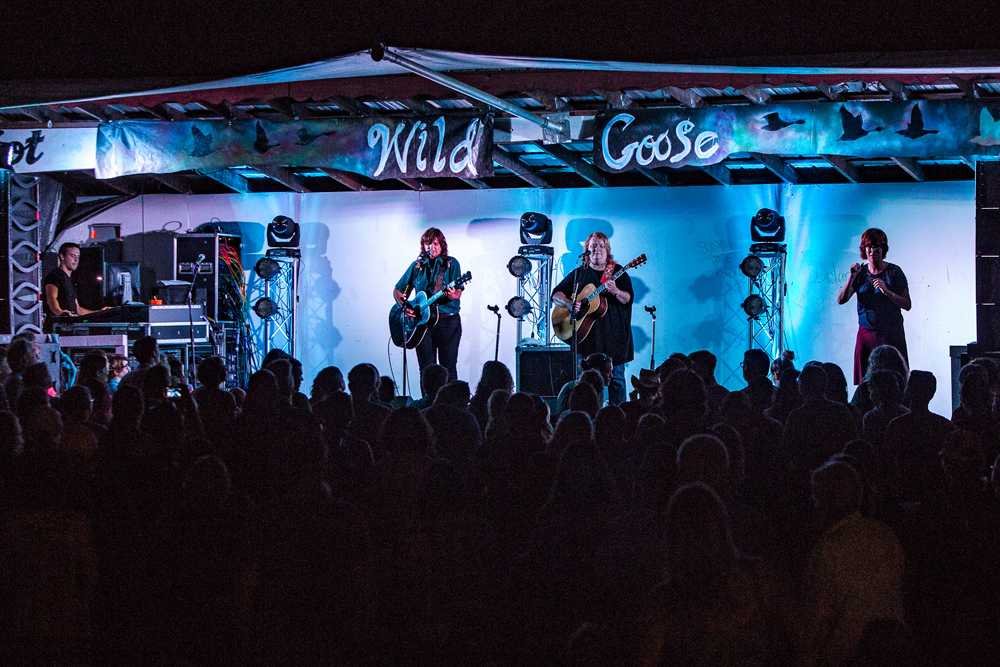 Clark said that co-creation is not limited to audience members; performers are also encouraged to co-create. He boasted that Wild Goose Festival is "non-greenroom oriented," meaning performers are not siloed into dressing rooms before and after shows, isolating themselves from "everyone else." Rather than just providing what Clark calls "an information dump," performers and speakers engage and converse with audience members to inspire change, even in casual chats after shows.

Gonda and Clark both recalled how last year's headliner, Amy Grant, the famous singer-songwriter who has been referred to as "the Queen of Christian Pop," participated in multiple discussion sessions "as just another co-creator." She even camped on the grounds with everyone else — guests can either camp on the festival's campgrounds or opt to stay somewhere in town.

"It was pretty cool that folks were standing shoulder to shoulder with someone" whose concert they might have once stood in line for, said Clark.

Although Wild Goose Festival invites people of all faiths and of no faith to attend, Gonda — who is a Catholic music minister and organizational development consultant — described many elements of the festival as "very Catholic." She said "current and former Catholics will feel very much at home" there.

"At the Goose, there is a feeling of sacramental and incarnational theology which underpins the call for justice and inclusion too," Gonda said.

Catholics have been involved with the festival since its inception, with Franciscan Fr. Richard Rohr speaking at the first festival in 2011. According to Gonda, even the image of the "wild goose" — the Celtic term for the Holy Spirit — honors the Holy Spirit's dynamic powers and "attribute of building unity."

A version of this story appeared in the July 12-25, 2019 print issue under the headline: Music festival builds community.