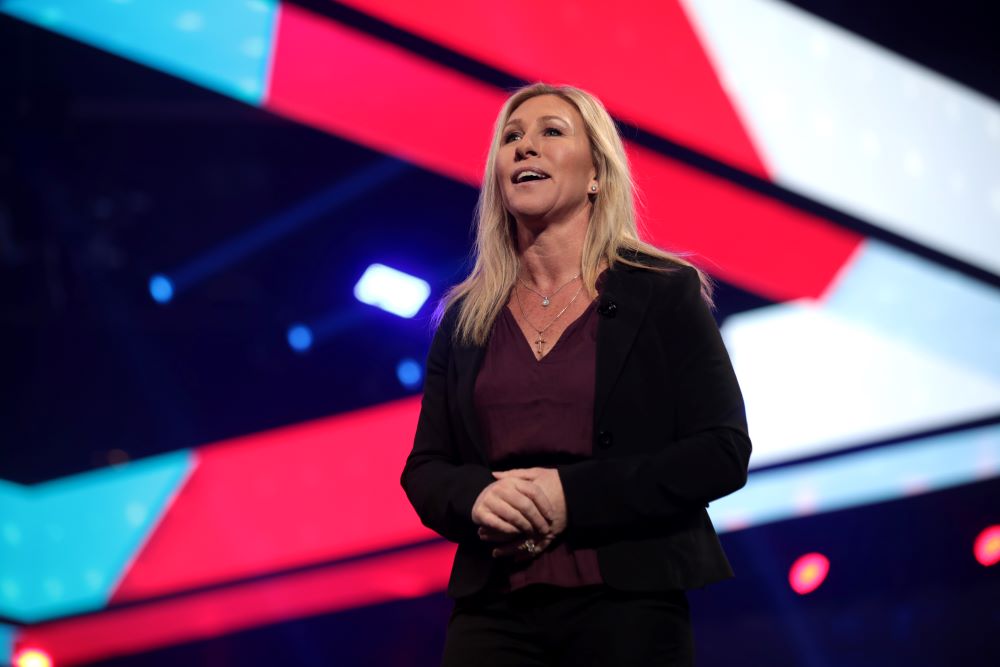 U.S. Rep. Marjorie Taylor Greene speaks with attendees at the 2021 AmericaFest at the Phoenix Convention Center in Phoenix, Arizona. Greene said she was raised Catholic and married in the church but left after the clergy sex abuse crisis. (Wikimedia Commons/Gage Skidmore)

U.S. Rep. Marjorie Taylor Greene, the firebrand far-right Republican from Georgia, waded into U.S. Catholics' heated debates this week when she told the right-wing outlet Church Militant that Satan is "controlling the church."

In a separate prepared statement, Greene also accused the Catholic bishops of "destroying" the United States by advocating for policies that support migrants and refugees. She repeated a conservative talking point that Catholic organizations profit from government contracts to provide care for migrants.

"What more can we expect from criminals and abusers living unaccountable lives of luxury funded by the rest of us, draped in fine linens while choirboys are raped," Greene said in her April 27 statement.

Her controversial comments garnered headlines and pushback from lawmakers and GOP strategists, and prompted Bill Donohue of the Catholic League to call her a "disgrace" and to demand that Congress sanction her.

"Greene has a history of offending African Americans and Jews, so bigotry is something that is apparently baked into her," Donohue wrote April 28 in a letter he sent to the House Ethics Committee.

Donohue, a hardline outspoken conservative who often calls out Democratic lawmakers and progressive activists, said the "time has come" for Greene either to be reprimanded or censured.

"Her irresponsible behavior has already caused her to be removed from committee assignments," Donohue said. "Accordingly, her burst of anti-Catholicism now demands stronger sanctions against her."

Greene criticized the Catholic Church, primarily for its pro-immigration stance, in an hourlong sit-down interview with Church Militant's Michael Voris that aired on April 25.

"If the bishops were reading the Bible and truly preaching the word of God to their flock … and not covering up child sex abuse and pedophilia, that would be loving one another, would have the true meaning and not the perversion and the twisted lie that they're making it up to be," Greene said.

In an April 28 speech from the House floor, U.S. Rep. Ted Lieu, a Democrat from California, said Greene's comments were "bigoted." Olivia Troye, a former national security adviser to former Vice President Mike Pence, tweeted that Greene's statements were "repulsive" and could "lead to threats" against churches and Catholics.

Steven Millies, director of the Bernardin Center at Catholic Theological Union in Chicago, told NCR that Greene's comments reminded him of an earlier era of anti-Catholic sentiment in the United States.

"I see a moment of political instability not unlike the late 1940s where this last acceptable prejudice becomes something that can be indulged to score points against Catholic bishops, who do have some political power but are on the other side of the partisan divide," Millies said.

"For me, the real takeaway here is that there is no mainstreaming of Catholicism that's enough to eliminate anti-Catholicism," said Millies, who noted the irony that Greene attacked the church on an outlet that presents itself as a faithful voice of traditional Catholicism.

Said Millies: "That anti-Catholicism can be deployed by a purported Catholic organization like Church Militant against Catholics and Catholic bishops is a startling new moment, and we've already had plenty of those lately. We're plumbing new depths."

Its coverage and commentary colored by right-wing ideology, Church Militant often attacks bishops and priests for alleged offenses that include being too tolerant of LGBTQ persons, pro-choice politicians and undocumented migrants. The outlet promoted its interview with Greene with the headline "Marjorie for Pope."

In March 2021, EWTN's News Nightly evening program also interviewed Greene in a sympathetic segment that presented her as a lawmaker hounded by Democrats for her Christian pro-life views. At the time, Greene was under fire for previous comments that seemed to support political violence against Democrats and a conspiracy theory that wealthy Jewish people were responsible for using space lasers to cause forest fires in California.

In her April 27 statement where she pushed back against Donohue, calling him a "loyal lapdog" for the bishops, Greene said she was baptized Catholic and was married in the church. Now an evangelical Christian, Greene said she left the Catholic Church as an adult because she would not submit her children's "spiritual and physical livelihoods" to the bishops, who she referred to as "monsters."