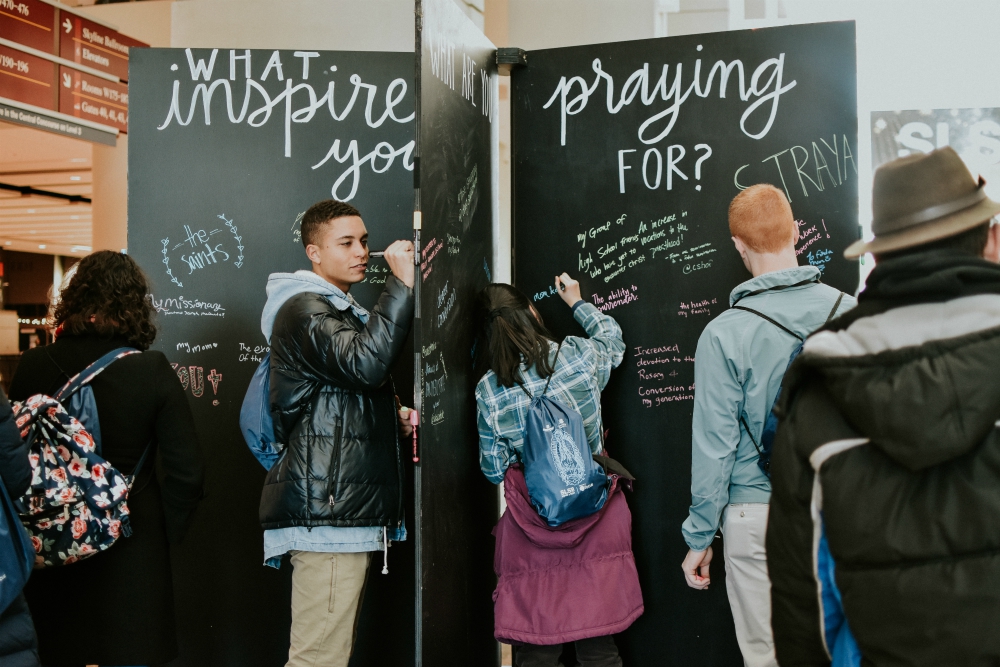 Attendees add prayer intentions and inspirational phrases to a display at the Student Leadership Summit, sponsored by the Fellowship of Catholic University Students in Chicago Jan. 2-6. (Courtesy of FOCUS)

Young Catholics should be immersed in the concerns of the world, especially issues that affect the "uns" — the unborn, the undocumented, the uneducated — just as Jesus immersed himself in the concerns of his day. That was the message Chicago Cardinal Blase Cupich gave to more than 8,000 attendees, most of them college students, at the closing Mass of a Jan. 2-6 conference sponsored by the Fellowship of Catholic University Students (FOCUS).

"Today the Holy Father is calling us to be concerned about the environment, global warming, the degradation of forests: to claim the world that we live in as our responsibility," Cupich said in his homily Jan. 6 at Chicago's McCormick Place.

Such activism would prevent Catholics from being "self-referential," he said, and instead make them "immersed in the concerns of God and God's people."

Social issues, however, were not the focus of the five-day Student Leadership Summit (SLS18), a biennial conference for students and alumni of FOCUS, an independent outreach program for college and university campuses.

Instead, the event sought to train and provide tools for evangelization, or as FOCUS terms it, "spiritual multiplication," in which disciples are called to be "not just faithful but fruitful."

The Genesee, Colorado-based organization accomplishes such evangelization through missionaries who work on college campuses. Inspired by Pope John Paul II's "new evangelization," FOCUS has grown to 660 missionaries on 137 campuses in its 20-year history. 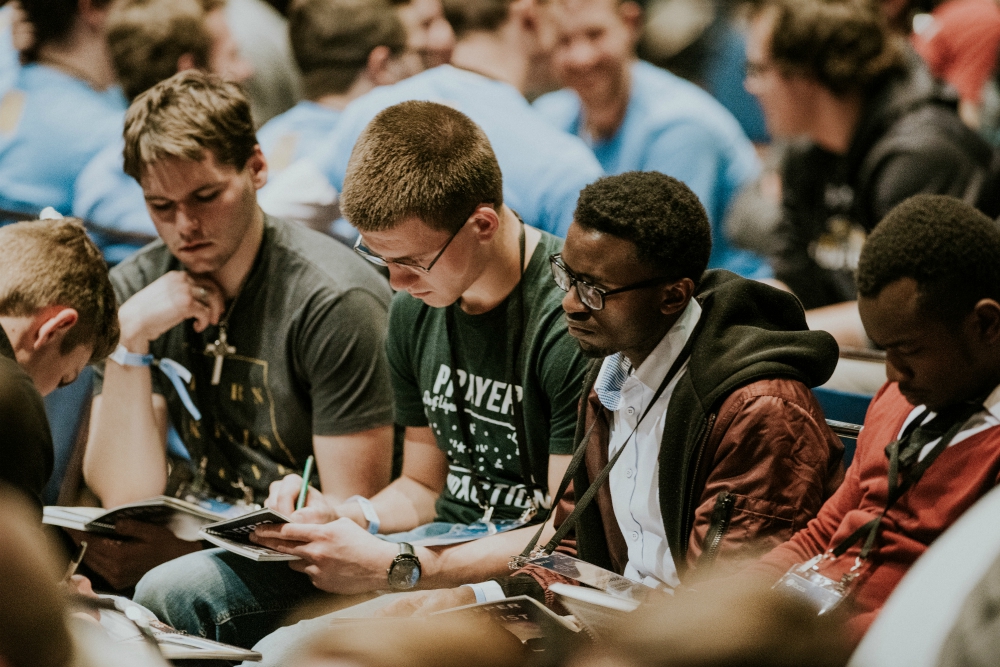 More than 8,000 attendees honed evangelization skills through training and practice sessions at the Jan. 2-6 Student Leadership Summit in Chicago. (Courtesy of FOCUS/David Hickson)

But spiritual multiplication is not just the work of full-time missionaries. The leadership summit provided inspiration and techniques for students and alumni to do their part in the "great commission" by reaching their friends, families and co-workers, on their campuses and in their parishes.

The key is to reach out to a few people, said FOCUS founder and "chief evangelization officer" Curtis Martin in his keynote address Jan. 5. In essence, "Jesus finds 12 guys and goes camping for three years," he said. "He simply loved a few really, really deeply."

As a demonstration of the possibility of a "ripple effect," Martin pointed out that if the students at the conference reached out to two other people — and encouraged those two to do likewise, and so on — in 25 cycles, more than 33 million people would be reached, and in 33 cycles, 8 billion. "Do the math," Martin said. "You could unleash a power that allows us to reach the world in a single generation."

Martin mentioned briefly those who are hungry, without clean water or living in slavery, but emphasized the importance of God's call to evangelize. "God is calling you to love him and love your neighbor," he said. "Not to have a general love of humanity; that's good too. But we can't love like that. We need to imitate Jesus, who loved a few and knew their names."

Another presenter graphically demonstrated how spiritual multiplication provides "maximum impact" with a chain of nine women who represented one vertical link of people reached through discipleship via what is, in effect, a pyramid-shaped model.

This "person-centered approach," in which "each person is known, loved and cared for" is effective and accessible to all, said John Zimmer, FOCUS' vice president of apostolic development. "Anyone can do it," he said.

Have you had experiences with FOCUS on a college campus? Contact Heidi Schlumpf at hschlumpf@ncronline.org if you are willing to speak with a reporter for a longer article about this organization.

At the closing Mass, Cupich reminded the young people to stay close to their families and receive the Eucharist as they embrace a time in their lives when they need to claim who they are and figure out who Jesus calls them to be.

"With fearlessness about the challenges of the world and with the spirit of Jesus Christ who is alive, take the next step of the journey of your life," Cupich said. "Embrace this moment. Cherish it as an opportunity for you to begin the journey of life in a fresh way. Christ the Lord has so much more in store for you."