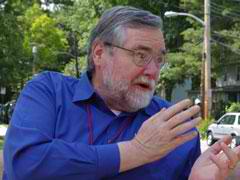 Terrence Tilley is seen in a 2011 file photo, taken during the annual meeting of the College Theology Society at Iona College in New Rochelle, N.Y. (NCR photo/Joshua J. McElwee)

ST. LOUIS -- Terrence Tilley is fond of saying that “theology is a team sport.” And on Saturday night, his teammates paused for a moment to recognize him as crucial to the team.

Tilley, the chair of the theology department at Fordham University noted for his dual interest in philosophy and theology, was awarded the John Courtney Murray Award from the Catholic Theological Society of America (CTSA), the society’s highest honor.

Recognized following a banquet during the society’s 67th annual convention here, Tilley received the award from John Thiel, a professor of religious studies at Fairfield University and the society’s current president.

During his awarding speech, Thiel mentioned many of Tilley’s accomplishments, including his time as the head of both the CTSA and a similar membership group of theologians, the College Theology Society.

Thiel also said that the catchphrase about theology being a team effort is best evinced by Tilley’s relationship with his family and his wife of 42 years, Maureen Tilley, who is also a professor of theology at Fordham and is known for her work on the history of early Christianity.

Referencing that Terrence Tilley’s doctoral dissertation was titled “On being tentative in theology,” Thiel concluded:

“Throughout [Tilley’s] career, there has been nothing at all tentative about his love for theology, his scholarly energy and his steadfast leadership in so many avenues of the academy.

“In recognition of his extraordinary gifts, his record of theological accomplishment, and his dedicated service, the Catholic Theological Society of America presents its highest honor, The John Courtney Murray Award for Distinguished Achievement in Theology to Terrence W. Tilley.”

Accepting the award flanked by his family, Tilley said he was glad Thiel mentioned his catchphrase, as he considers it a “crucial thing.”

“I think that that’s a crucial thing because it’s not merely that if we don’t hang together, we shall surely hang separately. It’s because as theologians, we are teachers, but we are first learners. We have learned from others how to do out work. I have learned from so many in this room from whom I am so grateful,” said Tilley.

“We are learners well before we are teachers. We are people who speak, but first we have to listen.”

More stories from the CTSA convention: