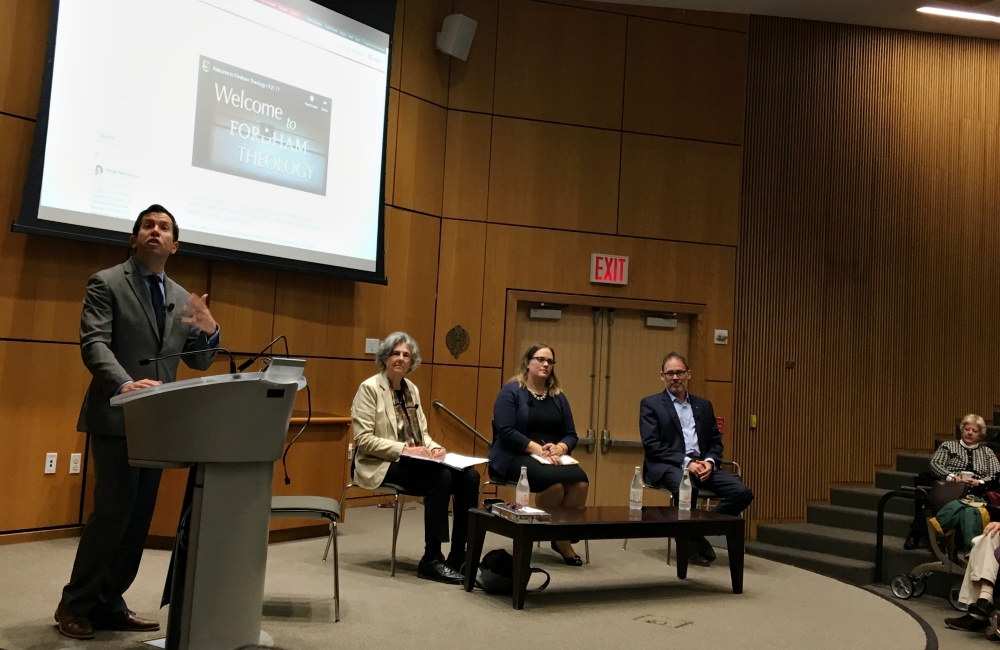 As the synod for the Amazon was entering its final week in Rome, scholars Phyllis Zagano, Meghan Clark and George Demacopoulos discussed the importance and need for women deacons, especially in the Amazon, at an Oct. 22 symposium at Fordham University here.

Zagano, a member of the papal Study Commission on the Women's Diaconate, said that the issue had also been discussed in previous synods. She recalled meeting women religious from around the world who were performing baptisms due to lack of priests. They didn't want to be ordained for power, rather to prevent people from going "next door to the Pentecostals."

Pope Francis, she said, recognized the need for women deacons because he's aware of people exiting the Catholic Church. "The Holy Father knows that the biggest exit ramp for Catholics is in South America. They are going to Protestant denominations and he saw it. So, women [deacons] have been brought up from synod to synod," said Zagano, who is also an NCR columnist.

Demacopoulos, a theology professor and co-director of Fordham's Orthodox Christian Studies Center, said there was a liturgical rite for the ordination of women that dates to the fourth century. "My sense is everybody in the room knows, but let me say just in case, there is absolutely no historical doubt whatsoever that the early church had a female diaconate. This is just fundamentally indisputable."

Clark, a Catholic feminist theologian and professor at St. John's University in New York, said she doesn't see how the topic wouldn't discussed at any synod. However, what she found unique this time around was that bishops at the synod were themselves bringing up the topic for discussion, "for the simple reality is that it is women in the Amazon who are ensuring the life of the faith community. That's not debatable. They're the ones baptizing, they're the ones conducting marriages, funerals."

What she also finds unique with this synod is how the bishops aren't "complaining about the situation." She said the bishops have finally recognized that their ministry "cannot happen without women."

From a moral theology perspective, Clark said she feels a "deep frustration" with the way public conversations around women's embodiment is conducted. Women are not only viewed as unclean but also untrustworthy and suspicious. "And so, we still have a predominant approach to Catholic moral theology coming out of the official church, especially here in the United States, that operates with a mirror of suspicion," she said.

When asked if there could be a female diaconate soon, Clark said, "Yes. Do I think that'll be in the United States of America? I have less hope there."

Zagano believes that in the United States, women can be educated to be deacons and if the diaconate opened up, "there would be a tsunami of acceptance." She said that "those left in the trenches"* have been saying that the church needs help, and that help needs to come from women, to counter "the pushback we're getting from women. You know, the pews are getting emptier of females."

When the time comes that women deacons will be ordained, it will happen organically, Demacopoulos said.

"When a pope or a patriarch or Synod of Bishops decides to affirm something, it's because there's already been a groundswell of practice that has led them to believe that way."

According to Clark, one the biggest roadblocks for a female diaconate within the Roman Catholic Church is the "fear not of becoming like the Protestants, but of that this is a slippery slope to the priesthood. I don't think that I will see ordained female priests in the Roman Catholic Church in my lifetime, but I do think we will see ordained female deacons."

*The original quote was inaccurate and has been fixed.