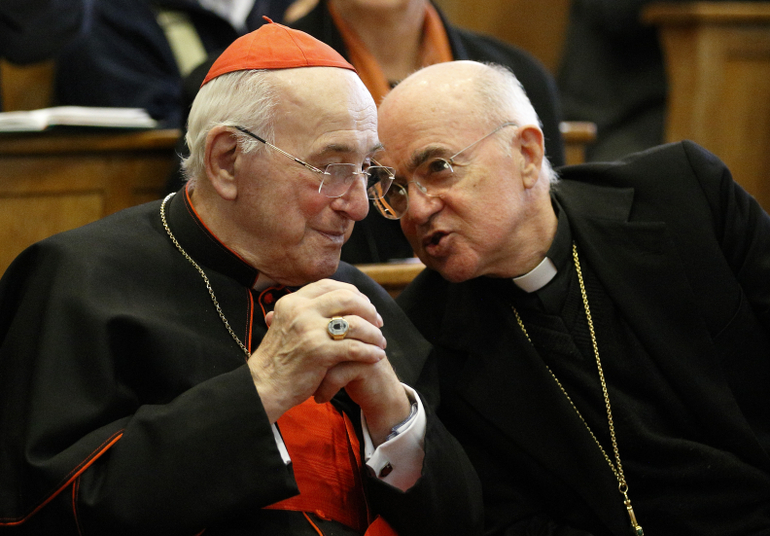 A former Vatican ambassador to Washington has published an 11-page letter filled with accusations against dozens of former and current high-level officials in the Catholic Church, claiming there was a systemic cover-up of allegations that now former cardinal Theodore McCarrick was sexually abusing seminarians.

Archbishop Carlo Vigano, who served as the Holy See's chief diplomat in the U.S. capital from 2011-2016, also claims that Pope Benedict XVI had placed unannounced sanctions on McCarrick, barring him from celebrating Mass publicly or traveling, and ordering him to a life of prayer and penance.

In an unprecedented broadside by a Vatican diplomat against a sitting pontiff, Vigano then accuses Pope Francis of ignoring the imposed sanctions and calls on him to resign in order to "set a good example for cardinals and bishops who covered up McCarrick’s abuses."

Although the Vatican press office said it would have "no immediate comment" on the letter, released by National Catholic Register and LifeSiteNews early Aug. 26, at least several of its claims appear contradicted by the historical record.

McCarrick, for example, was seen celebrating numerous public Masses throughout Benedict's papacy and continued traveling around the world until the announcement in June that the Vatican had ordered his removal from ministry over an accusation of abuse that had been deemed credible.

Benedict also did not hesitate to act publicly when another cardinal, Scotland's Keith O'Brien, was accused of improper sexual relationships. In that case, Benedict accepted O'Brien's resignation and his decision not to attend the 2013 conclave that elected Francis.

Beyond his factual claims, Vigano's letter is laced as well with ideological claims about other Catholic prelates. He says one, for example, has a "pro-gay ideology" and that another "favored promoting homosexuals into positions of responsibility."

McCarrick, who led the Washington archdiocese from 2000-06, became the first U.S. prelate to renounce his position in the College of Cardinals July 28.

NCR has chosen not to name prelates identified by Vigano in his report except in cases where the officials were known to be his or McCarrick's direct superiors or predecessors, due to the inability to corroborate the former ambassador's account.

Vigano claims that two of his predecessors in Washington, Archbishops Gabriel Montalvo and Pietro Sambi, "did not fail" to notify the Vatican about allegations against McCarrick as early as 2000, the year when Pope John Paul II appointed McCarrick archbishop of the capital city.

Vigano says Sambi forwarded one specific accusation against McCarrick to the Vatican's then Secretary of State, Cardinal Tarcisio Bertone, in 2006. The accusation, Vigano says, was made by a priest of the Charlotte diocese who was laicized for abusing minors.

The former ambassador says he wrote a report on the accusations in his role at the time as the Vatican's Delegate for Pontifical Representations, which was given to Bertone and now Cardinal Leonardo Sandri, who was then Bertone's second-in-command and is now head of the Congregation for the Oriental Churches.

Vigano says his report was "kept by my superiors, and was never returned to me with any actual decision by the superiors on this matter." He says he raised the issue in a second memo in 2008, which was also never answered.

But he says he then learned sometime later from Cardinal Giovanni Battista Re, then the head of the Congregation for Bishops, that his second memo had an effect.

"Pope Benedict had imposed on Cardinal McCarrick sanctions similar to those now imposed on him by Pope Francis," states Vigano. "The Cardinal was to leave the seminary where he was living, he was forbidden to celebrate [Mass] in public, to participate in public meetings, to give lectures, to travel, with the obligation of dedicating himself to a life of prayer and penance."

Vigano says he does not know when Benedict took his alleged action against McCarrick, but suggests it happened in 2009 or 2010. He blames the delay on the former pontiff's action on Bertone.

The former ambassador also alleges that Cardinal Donald Wuerl, who took over leadership of the Washington archdiocese after McCarrick's resignation for reasons of age in 2006, was informed of the sanctions placed on his predecessor.

Wuerl's spokesman, Ed McFadden, said in a statement to Catholic News Agency that the cardinal "did not receive documentation or information from the Holy See specific to Cardinal McCarrick’s behavior or any of the prohibitions on his life and ministry suggested by Archbishop Vigano."

The former ambassador claims he brought up the allegations against McCarrick with Francis for the first time in 2013, about three month's after the pope's election as pontiff. He said he told the pope that the Congregation for Bishops had a dossier on the prelate and that he had "corrupted generations of seminarians and priests."

Vigano then claims that Francis had made McCarrick "free from all constraints" and allowed him to travel and give lectures, but cites no evidence of any sort of papal directive overturning Benedict's alleged earlier imposition of sanctions.

"Pope Francis has repeatedly asked for total transparency in the Church and for bishops and faithful to act with parrhesia," states the former ambassador. "The faithful throughout the world also demand this of him in an exemplary manner. He must honestly state when he first learned about the crimes committed by McCarrick, who abused his authority with seminarians and priests."

Vigano's tenure in Washington ended in controversy when his name surfaced in questions over how Francis came to meet a Kentucky county clerk who defied a U.S. federal court order to issue marriage licenses to same-sex couples during his 2015 visit to the U.S.

Francis accepted Vigano's resignation from his diplomatic post in April 2016, about three months after the prelate reached the traditional retirement age of 75.

Vigano himself has also been accused of covering up sexual misconduct.

Three months after his departure from Washington, a 2014 memo he had written ordering the quashing of an investigation into alleged homosexual activity on the part of now former St. Paul-Minneapolis Archbishop John Nienstedt was made public at the conclusion of a criminal investigation.

Vigano had also ordered the destruction of a piece of evidence. Nienstedt resigned from his post in 2015.

Release of the former ambassador's letter came as Francis was on an Aug. 25-26 visit to Ireland, hours before Francis was expected to have his traditional press conference with journalists on the flight back to Rome.