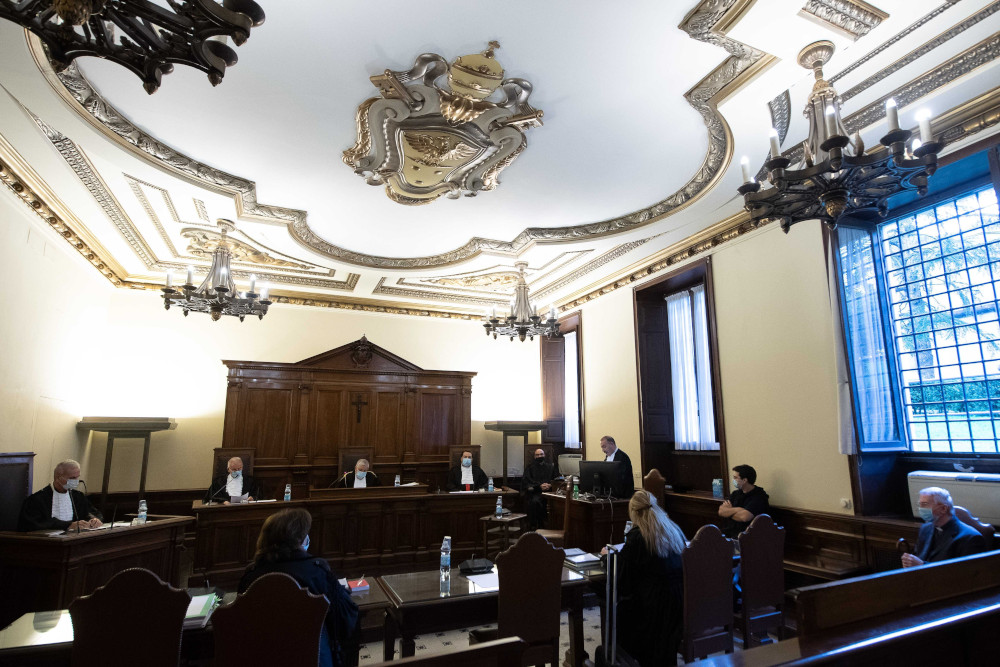 This Oct. 14, 2020, file photo shows the Vatican City State criminal court during the opening of the trial of Fr. Gabriele Martinelli and Msgr. Enrico Radice. Martinelli is accused of repeatedly sexually abusing a younger student at the Vatican's St. Pius X Pre-Seminary. Msgr. Enrico Radice, former rector of the seminary, has been accused of obstructing the investigation into the younger priest. (CNS photo/Vatican Media)

Four former students at the minor seminary located in the Vatican testified May 12 at the ongoing trial of Fr. Gabriele Martinelli, who is accused of sexually abusing a younger student at the St. Pius X Pre-Seminary.

One of the former students asked the journalists present to refer to him only by his initials, M.B., because he soon will be ordained to the priesthood; Giuseppe Pignatone, president of the Vatican City State tribunal, supported the request.

The four former students each had been questioned by Vatican investigators in 2018, and portions of their statements to the investigators were read at the trial. The May 12 session was the ninth of the trial, which began in October.

Msgr. Enrico Radice, the former rector of the seminary, also is on trial and is accused of hindering the investigation into the abuse allegations. The seminary and the Opera Don Folci, the religious institution that runs the minor seminary, are accused of failing to protect the young students.

M.B. was the only one of the four witnesses to tell both the court and the investigators that the young man accusing Martinelli had told him of the abuse. And, he had told investigators in April 2018, "these facts were known to many at the pre-seminary."

M.B. and the victim, L.G., were roommates for two years. L.G. had testified that Martinelli would sneak into his bed at night and abuse him.

"I did not witness what L.G. told me happened to him at night," M.B. said. Asked specifically if he ever saw Martinelli enter their room at night, M.B. told the court, "No, I'm a heavy sleeper."

Andrea Garzola, another former student, said he never witnessed any sexual acts or abuse while in the pre-seminary, but Martinelli did grab his genitals once, which led to a big fight, he said, and after that Martinelli, who was in charge of assigning students roles at Vatican liturgies, "assigned me to minor Masses."

Thomas Compagnoni, who entered the pre-seminary in 2013 at the age of 12 and stayed only a year, said L.G. was the person who encouraged him to enter the school, and he never said anything about abuse.

Fr. Francesco Vicini, another former student and current vice rector of the pre-seminary, said he was L.G.'s roommate in 2006.

"He was a very serene boy, but he became grumpy over the years," Vicini had told Vatican investigators, adding that L.G. was very "jealous" of Martinelli because of his role in making altar server assignments.

"I never had any knowledge or perception of what is now being talked about," he said, referring to the abuse accusations.

Testifying in court, Vicini said that "L.G. and Martinelli were always arguing about everything. L.G. was not afraid of Martinelli, he was not one to keep quiet; if he disagreed with something, he made himself heard,” which, the priest said, led him to believe Martinelli did nothing wrong.