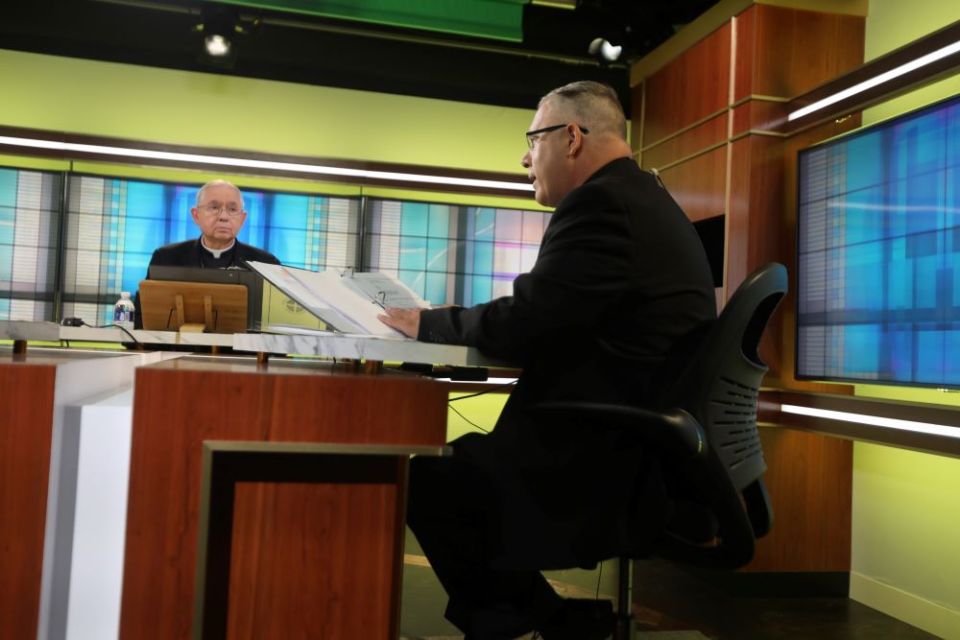 Archbishop José H. Gomez of Los Angeles, president of the U.S. Conference of Catholic Bishops, looks on as Msgr. Jeffrey D. Burrill, USCCB general secretary, reads a message to Pope Francis June 16, 2021, during the opening of the bishops' three-day virtual spring meeting. Burrill, who resigned his post July 20, 2021, amid allegations of improper behavior, has returned to ministry as a parish priest in Diocese of La Crosse, Wisconsin. (CNS/Bob Roller)

Almost a year after he resigned as general secretary of the U.S. bishops' conference amid allegations of improper behavior in his personal life, Msgr. Jeffrey Burrill has returned to ministry as a parish priest in his home diocese.

Bishop William Callahan of La Crosse, Wisconsin, said June 14 that he was appointing Burrill to be the parochial administrator of St. Teresa of Kolkata Parish in West Salem. The assignment was listed effective as of June 11.

In a statement posted on the parish website, Callahan told St. Teresa parishioners that Burrill, who will reside at the parish rectory, has completed an extended leave from active ministry. During that leave, the bishop said, Burrill "engaged in a sincere and prayerful effort to strengthen his priestly vows and has favorably responded to every request made by me and by the Diocese."

Burrill resigned his post at the bishops' conference on July 20, 2021. In an internal memo obtained last year by NCR, Archbishop José Gomez of Los Angeles notified the Catholic bishops in the United States that the surprise resignation came amid "impending media reports alleging improper behavior" by Burrill.

"What was shared with us did not include allegations of misconduct with minors," Gomez, the conference president, wrote. "However, in order to avoid becoming a distraction to the operations and ongoing work of the Conference, Monsignor has resigned effective immediately."

The article's authors premised their allegations on an analysis of application data signals that they said correlated to Burrill's cell phone. The authors did not provide corroborating information of Burrill's alleged conduct beyond the location data, and never said how they obtained the data or who paid for and provided that information. The article sparked pointed debates and commentary about The Pillar's journalistic practices and ethics.

In his statement, Callahan said the Diocese of La Crosse had received no allegations of illegal misconduct "of any kind" by Burrill, who was ordained a diocesan priest in 1998. Burrill previously served as a parish priest and as director of apostolic formation at the Pontifical North American College in Rome, where he also later served as the Carl J. Peter chair of homiletics, formation adviser and director of media relations. He was named associate general of the bishops' conference in 2016.

In November 2020, the bishops elected Burrill for a five-year term as general secretary, who oversees the work of the U.S. Conference of Catholic Bishops on behalf of the U.S. bishops.

Callahan told St. Teresa parishioners that he has "every confidence in returning Monsignor Burrill to active ministry and in his ability to accompany the people of God of this parish."