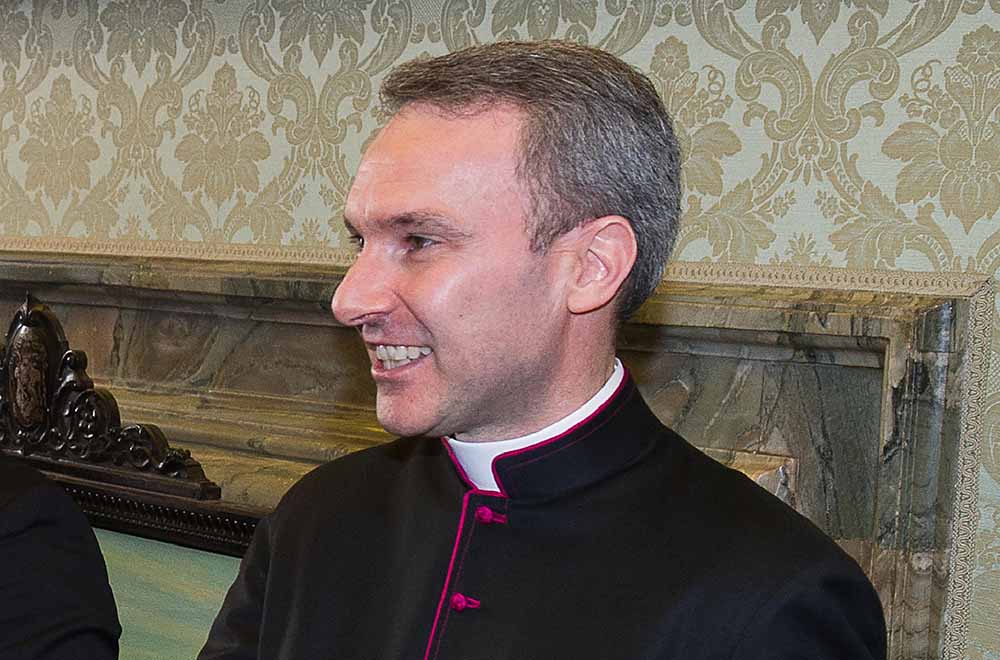 Msgr. Carlo Capella, pictured at the Vatican in 2015 (CNS)

Vatican officials have arrested an Italian monsignor who was recalled from service at the apostolic nunciature in Washington in August 2017 under suspicion of possessing or distributing child pornography.

In a brief note April 7, the Vatican press office said the city-state's prosecutor had issued an arrest warrant that morning for Msgr. Carlo Capella, who was subsequently detained by the Vatican Gendarmerie.

The note said Capella is being held under the authority of a set of 2013 Vatican criminal norms that specify that those who possess or distribute child pornography be subject to up to five years imprisonment and 50,000 Euro in fines.

The press office said Capella is being held under an article in the norms that state the penalty for the offense can be increased "if a considerable quantity of pornographic material is involved."

Capella had worked at the nunciature, or embassy, in Washington since mid-2016. He was recalled to the Vatican in August 2017 when the U.S. State Department notified the Holy See of his possible violation of laws relating to child pornography.

Police in Canada subsequently issued a nationwide arrest warrant for the monsignor in September 2017 on charges of accessing, possessing and distributing child pornography.

The Vatican press office first announced a diplomat's recall Sept. 15, 2017, but did not initially identify Capella by name.

In a notable statement the day of that announcement, U.S. bishops' conference president Cardinal Daniel DiNardo called on the Vatican to be more forthcoming with information and to mount a "transparent" investigation.

It is not immediately clear what happens next in Capella's case, but it appears likely that the monsignor will face trial in the Vatican city-state criminal tribunal, which is distinct from the church's various canonical tribunals.

The 2013 norms under which Capella is being held were approved by Pope Francis partly in order to extend the jurisdiction of the law of the city-state to all Vatican employees across the world. Any direct employee of the Holy See can now face a criminal trial at the Vatican as well as criminal prosecution in the country where the crimes occurred.

Prior to working in Washington, Capella had worked at the Italy desk of the Vatican's Secretariat of State. He is a priest of the Milan archdiocese.