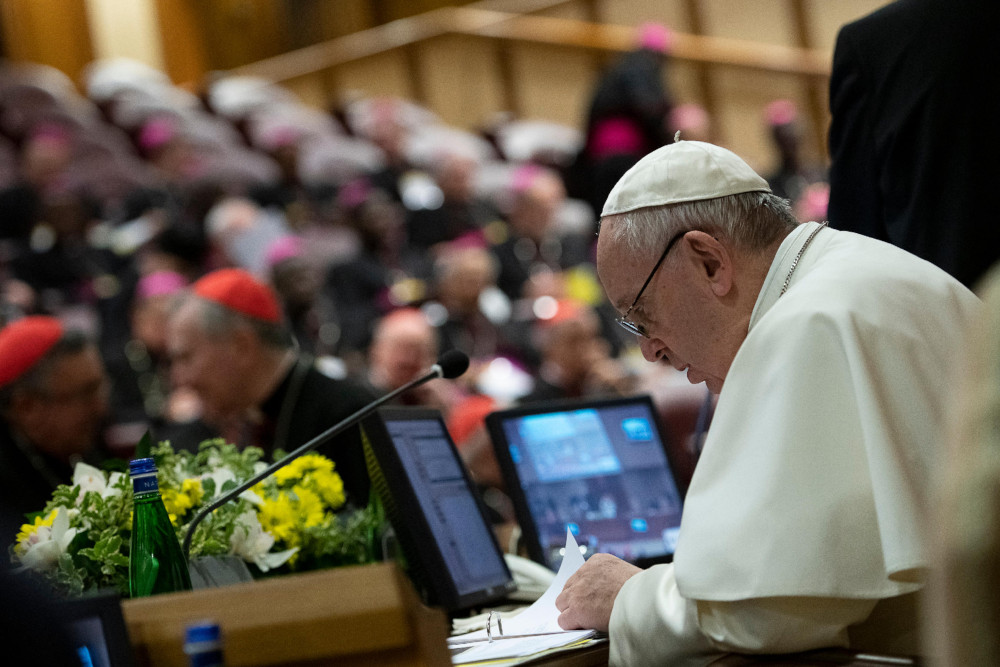 Pope Francis reviews papers during the February meeting on the protection of minors in the church at the Vatican. (CNS photo/Vatican Media)

In a brief but sweeping new instruction that goes into effect immediately, the pontiff states plainly that the practice, known as the pontifical secret, is no longer to apply to any accusations, proceedings, or final decisions involving clergy abuse.

Listen to Vatican correspondent Joshua McElwee talk to NPR Morning Edition's David Greene about the end of the use of the pontifical secret in abuse proceedings.

While such matters will continue to be treated with a lower level of confidentiality, the pope also specifies that anyone who files a report, alleges abuse, or comes forward as a witness to abuse "shall not be bound by any obligation of silence with regard to matters involving the case."

The new instruction, which contains five short points, is titled Sulla riservatezza delle cause ("On the Confidentiality of Legal Proceedings").

In a separate action released at the same time as the instruction, Francis also made changes to a set of norms issued by Pope John Paul II in 2001 that define the "grave delicts" the church reserves to the judgement of the Vatican's Congregation for the Doctrine of the Faith.

In those changes, which go into effect Jan. 1, the pope redefines child pornography as any inappropriate photographic material taken of minors under the age of 18, raising the age threshold from the previous standard of the age of 14.

About an hour after release of the instruction and the changes to the norms, Francis took a third action in the realm of clergy abuse, with the Vatican announcing the pontiff had accepted the resignation of his ambassador to France, Archbishop Luigi Ventura, who has been accused of sexual misconduct.

Abuse survivors and advocates had long called for a change of the pontifical secrecy rules in order to allow greater transparency about who had been accused of abuse, and to facilitate ease of reporting to civil authorities.

Francis is known to have faced significant resistance inside the Vatican bureaucracy regarding the change in secrecy rules from officials who see maintaining confidentiality as a way to protect the reputations of both the victim and the alleged accuser until the matter has been adjudicated.

Several former members of the pope's clergy abuse commission had told NCR in 2018 that their group had formally asked the pontiff to revise the pontifical secret a year earlier, and expressed frustration at the time that he had not yet done so.

The issue gained more public notice at a first-of-its-kind summit Francis held at the Vatican this February among the heads of the world's bishops' conferences on clergy sexual abuse, when several bishops and cardinals called for changes.

In a brief phone interview after release of the instruction Dec. 17, Scicluna called the pope's abolishing of the secret in abuse cases a "very important development."

The prelate, who leads the archdiocese of Malta while also serving as adjunct secretary of the Vatican's doctrinal congregation, highlighted the fact that survivors who report abuse can now more easily follow the church's handling of their cases.

Scicluna also predicted that the change would have a significant impact in dioceses around the world. "The other aspect is that local church jurisdictions cannot quote the pontifical secret to avoid either cooperating or sharing with the authorities," he said.

Anne Barret Doyle, the co-director of the U.S.-based clergy abuse watchdog group BishopAccountability.org, called the change "an overdue and desperately needed step" in an email.

"For decades, pontifical secrecy has been an inexcusable obstruction to civil justice," said Doyle. "Let's hope this reform is a first step toward decreasing the anti-victim bias of canon law -- a system skewed towards protecting the abuser and saving his priesthood."

Most matters handled by offices at the Vatican are kept under a base level of secrecy known as the "secret of the office," but more serious issues have traditionally been subject to the pontifical secret, violation of which can trigger severe penalties, including excommunication.

Broadly speaking, the pontifical secret had previously applied to all penal procedures undertaken by the doctrinal congregation. It still applies in a range of other areas, including the Vatican's diplomatic cables and on early knowledge of unannounced appointments of bishops and cardinals.

The revising of the pontifical secret and the changing of the age threshold for child pornography are the third set of concrete reforms issued by Francis since the February summit.

In May, the pontiff issued a new set of laws mandating for the first time that all priests and members of religious orders worldwide are obligated to report any suspicions of abuse or its cover-up and establishing a new global system for the evaluation of reports of abuse or cover-up by bishops.

Earlier, in March, the pope released a new child-protection policy for Vatican City and for the church's global ambassadors.

In a series of commentaries on the state-run Vatican News website following release of the pope's new instruction, several officials pointed to the effect that abolishing the pontifical secret in abuse cases could have in the church's sharing of information with local civil authorities.

Andrea Tornielli, who is in charge of the overall editorial direction of the Vatican's media outlets, said the change means documents from abuse cases "can now be handed over when requested to lawful authorities in their respective countries."

"This is a sign of openness, transparency, and willingness to collaborate," he said.

The new instruction could also have an impact on the Vatican's preparation of its promised report on the rise of now disgraced former cardinal Theodore McCarrick. Although there is little information about the status of that report, many of the documents being collated for inclusion likely would have previously been under pontifical secret.

While Scicluna did not give more details in response to a question about the status of the Vatican's report on McCarrick's rise, the archbishop said that after Francis' instruction "the pontifical secret does not apply to the sexual misconduct aspect of that case."