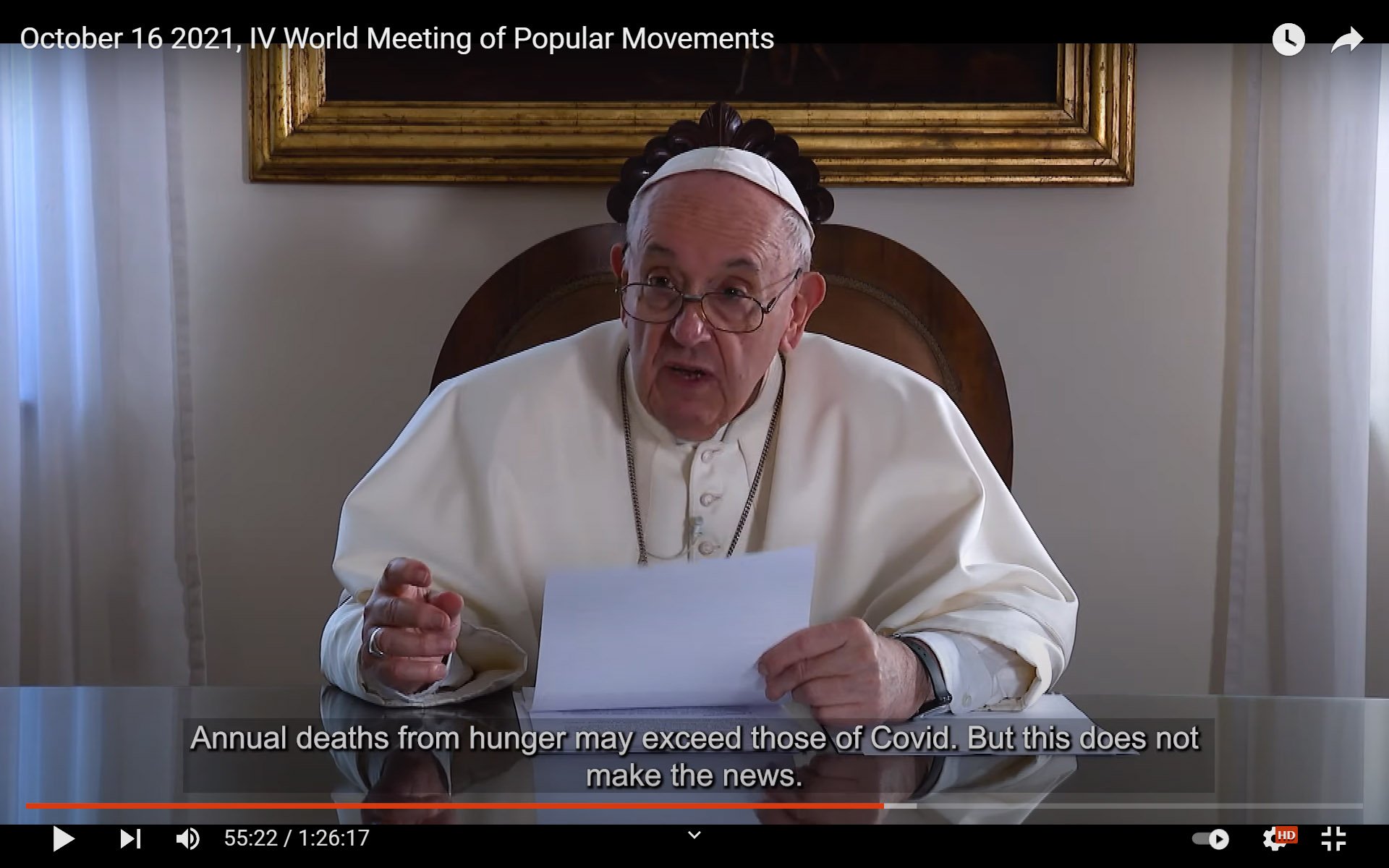 Pope Francis said he knows "it often annoys people" when he promotes Catholic teaching on social issues like poverty, migration and ecology, but he is going to keep doing so because the Gospel demands it.

"Principles such as the preferential option for the poor, the universal destination of goods, solidarity, subsidiarity, participation and the common good" are all values that that ensure "the good news of the Gospel takes concrete form on a social and cultural level," the pope said in a video message Oct. 16 to the virtual World Meeting of Popular Movements.

The meeting brought together leaders of cooperatives and other grassroots organizations of the poor, the underemployed, Indigenous communities and farmworkers.

"We have all suffered the pain of lockdown, but as usual you have had the worst of it," the pope told members of the groups.

"Migrants, undocumented persons, informal workers without a fixed income were deprived, in many cases, of any state aid and prevented from carrying out their usual tasks, thus exacerbating their already grinding poverty," he said. And while one-third of the world's people live in such precarious situations, they garnered almost no media attention, but remained "huddled together and hidden."

When the rich and powerful ignored them, he said, the poor themselves assisted their neighbors.

Pope Francis thanked members of the movements for demonstrating true humanity, "the humanity that is not built by turning your back on the suffering of those around you, but in the patient, committed and often even sorrowful recognition that the other person is my brother or sister and that his or her joys and hopes, griefs and anxieties are also mine. To ignore those who have fallen is to ignore our own humanity that cries out in every brother and sister of ours."

Obviously, such protests can be exploited and manipulated, "but the main thing is that in that protest against this death, there was the collective Samaritan," Pope Francis said. "This movement did not pass by on the other side of the road when it saw the injury to human dignity caused by an abuse of power. The popular movements are not only social poets but also collective Samaritans."

The work for greater inclusion and equality and real change to protect the dignity of all human life faces resistance from what Catholic social teaching has called "structures of sin," he explained. "These too we are called to change."

Personal conversion always is necessary, he said, "but it is also indispensable to adjust our socio-economic models so that they have a human face, because many models have lost it. And thinking about these situations, I make a pest of myself with my questions. And I go on asking. And I ask everyone in the name of God."

Pope Francis then made a series of appeals, including asking pharmaceutical companies to release the patents on their COVID-19 vaccines so that they could be manufactured cheaply in poor countries "where only 3% or 4% of the inhabitants have been vaccinated."

"In the name of God," he asked for the cancellation of the foreign debts of poor countries, and asked mining, oil, forestry, real estate, and big agribusiness companies "to stop destroying forests, wetlands and mountains, to stop polluting rivers and seas, to stop poisoning food and people."

He asked weapons manufacturers and dealers "to completely stop their activity, because it foments violence and war," and he asked telecom giants to make it easier for teachers and students in poor communities to access distance learning.

"In the name of God, I ask the media to stop the logic of post-truth, disinformation, defamation, slander and the unhealthy attraction to dirt and scandal, and to contribute to human fraternity and empathy with those who are most deeply damaged," he said.

Pope Francis also spoke of the need to create more jobs, perhaps by shortening the workday, and to ensure a living wage for all workers, including those working in the informal economy, like members of the popular movements who collect trash and recycle it, or work as seamstresses from home or sell on the street the vegetables they grow.

The universal basic income or minimum salary would guarantee that everyone has access "to the most basic necessities of life," he said.

Shortening the workday is an idea "that needs to be explored seriously," he said. "In the 19th century, workers labored 12, 14, 16 hours a day. When they achieved the eight-hour day, nothing collapsed, contrary to what some sectors had predicted. So, I insist, working fewer hours so that more people can have access to the labor market is something we need to explore with some urgency."

"The principles I set out are tested, human, Christian and are compiled in the Compendium" of Catholic Social Teaching, he said. "Sometimes, when the popes — be it me or Benedict or John Paul II — say something, there are people who wonder: 'Where did he get it from?' It is the traditional teaching of the church. There is a lot of ignorance about this. The principles I expound are in this compendium commissioned by St. John Paul II. I recommend that you read it."

A version of this story appeared in the Oct 29-Nov 11, 2021 print issue under the headline: Catholic social teaching gives Gospel concrete form.