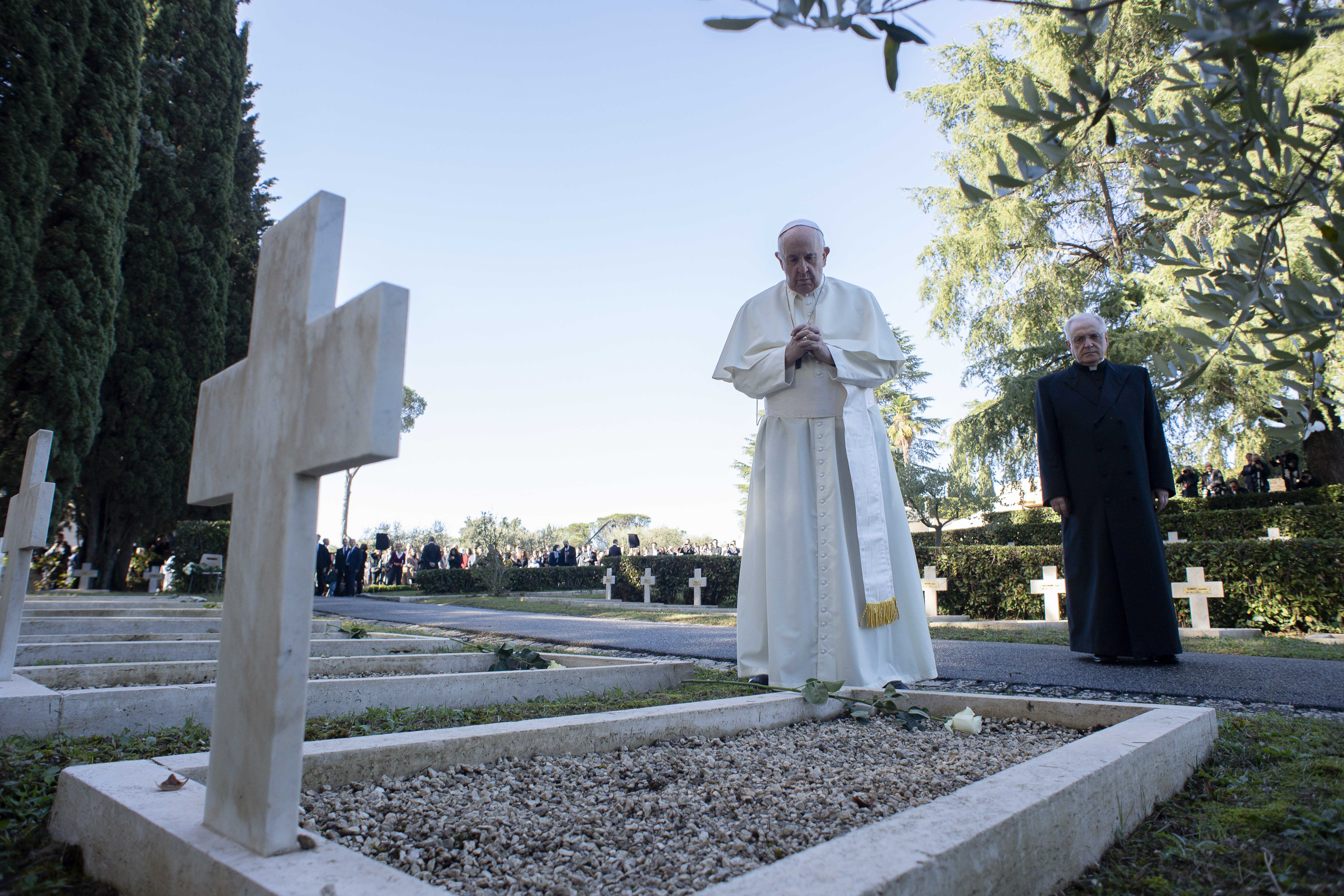 Pope Francis prays at a grave at the French Military Cemetery before celebrating Mass for the feast of All Souls at the cemetery in Rome Nov. 2, 2021. (CNS photo/Vatican Media)

The tombstones of soldiers killed in war cry out to people today to end all wars and to stop the production of weapons, Pope Francis said.

"I am sure that all of those who went with goodwill (to war), called by their country to defend it, are with the Lord," he said, celebrating Mass on the feast of All Souls, Nov. 2, at the French Military Cemetery in Rome.

An easing of restrictions during the COVID-19 pandemic allowed Pope Francis to resume his usual practice of celebrating Mass on the feast of All Souls in a cemetery — in Rome or nearby — but only about 250 people were in attendance. Last year he presided over a private Mass in a chapel and then visited and blessed graves in a small cemetery inside the Vatican.

The Italian government established the French Military Cemetery to honor the French soldiers who fought against Nazi and fascist forces on Italian soil from 1943 to 1944. Nearly 2,000 French soldiers are buried here, many of them Moroccan soldiers who served under French officers. Among those present at the Mass was Cardinal Dominique Mamberti, prefect of the Vatican's highest court, who was born in Marrakech, Morocco, to French parents.

The pope arrived by car to the hilltop cemetery just a few miles north of the Vatican and placed white roses on several graves. He prayed in silence before walking slowly through one of the rows marked by marble crosses.

"These tombs that speak, they cry out, cry out by themselves, 'Peace!'" he said during his off-the-cuff homily at the Mass.

"These graves are a message of peace," urging people today to stop all war and calling on weapons manufacturers to cease production, the pope said.

As people visit cemeteries on the feast day, he said, they should take time to pause and realize they are on a journey that will end someday.

The journey of life should not be a leisurely "stroll" in the park nor is it an impossible "labyrinth," he said, but it is a journey that involves effort and understanding there will be "a final step" at the end of that earthly path.

Everyone is on a journey which entails facing "many historical realities, many difficult situations," and cemeteries are a reminder to take pause and reflect on the nature of one's own journey and where it is heading, he said.

Looking at the gravestones, the pope said he sees "good people" who died at war, "died because they were called to defend their country, to defend values, ideals and, many other times, to defend sad and regrettable political situations."

"And they are victims, victims of war which devours the sons and daughters of a nation," he said, recalling a number of deadly battles fought in the 20th century.

The graves marked "unknown" instead of with a name show "the tragedy of war," even though God always keeps the name of everyone in his heart, he said.