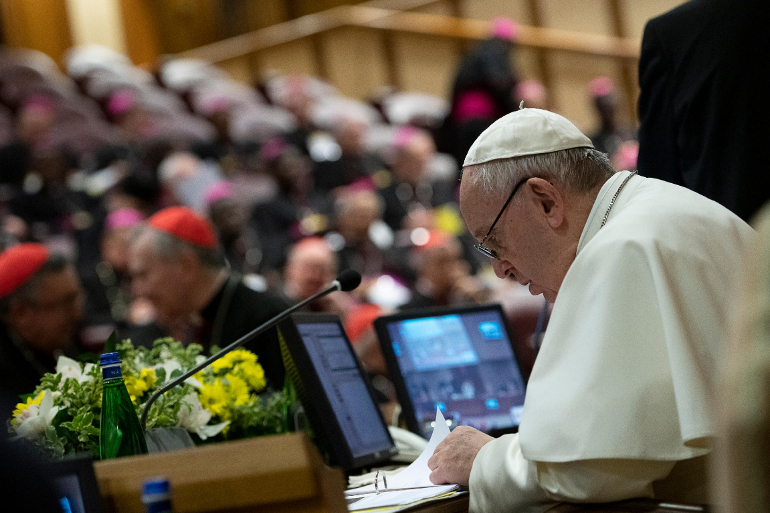 Pope Francis reviews papers during the meeting on the protection of minors in the church at the Vatican Feb. 23, 2019. (CNS photo/Vatican Media)

Pope Francis has approved the first overarching child protection policy for Vatican city-state, mandating that all the personnel of the Catholic Church's headquarters report any suspicion of abuse of a minor or vulnerable person to the Vatican's judicial authorities.

The pontiff has likewise obligated the church's diplomatic officials around the world to report suspicions of abuse by other diplomats to the Vatican.

The moves, made by the pope in an apostolic letter and a new Vatican city-state law released March 29, have been touted by church officials in advance as the first concrete results of Francis' global summit on clergy sexual abuse, held in February.

In his introduction to the apostolic letter, issued 'motu proprio' (on his own initiative), Francis calls protecting minors and vulnerable people "an integral part" of the church's mission.

The pontiff calls for the church to create a "respectful community" that is mindful of "the rights and needs of minors and vulnerable people" and has "awareness of the duty to report abuse to the competent authorities and to cooperate in prevention activity."

The pope says he wants a Catholic Church where "every mistreatment or abuse of minors or vulnerable people is effectively prosecuted."

Although Francis had signed a Vatican city-state law three months after his election as pontiff in March 2013 that formally criminalized the sale of children, child prostitution, and sexual acts against children, that law did not outline penalties for not reporting knowledge of such crimes.

The new law, which is comprised of 12 short articles that will go into effect June 1, states that any Vatican official or church diplomat who becomes aware of alleged abuse but does not report it can face fines up to 5,000 Euro. In the case of a Vatican police officer, the punishment is up to six months in jail.

Vatican officials are now "obliged to present, without delay, a complaint … every time, in the exercise of their office, they become aware of news or reasonable grounds to believe that a minor or vulnerable person has been victim to a crime," Francis explains in the apostolic letter.

The law sets the statute of limitations at 20 years; in the case of a minor the time-frame for the statute is to begin from the alleged victim's 18th birthday.

Survivors and their advocates had long criticized the church for not having an overarching child protection policy for Vatican city-state. Some bishops have also quietly leveled criticism, noting that Pope Benedict XVI mandated in 2011 that all the world's national bishops' conferences create such policies but had not implemented one at the Vatican.

The Vatican had also promised the United Nations Committee on the Rights of the Child in 2014 that it would develop a child protection policy.

Francis' child protection summit, held Feb. 21-24, brought together the heads of the world's bishops' conferences and leaders of many religious orders for a first of its kind meeting to discuss the continuing abuse crisis.

Jesuit Fr. Federico Lombardi, a former director of the Vatican press office and the summit's moderator, had announced the coming creation of a child protection policy for Vatican city-state shortly after the meeting's ending Feb. 24.

Lombardi also announced two other initiatives that have yet to materialize: a new handbook for bishops around the world on how to handle abuse claims, and establishment of regional "task forces" to assist dioceses and bishops' conferences in their work.

Beyond mandating reporting of suspected child abuse, Francis' new law also requires the Vatican city-state to organize formation programs for its personnel on "sexual abuse, mistreatment of minors, as well as the means to identify and prevent these offenses and the obligation to report."

The law likewise offers protections for those who report suspected abuse and the alleged victim, stating that they are to be cared for and free from "any form of intimidation of reprisal."

It also states that the victim is to be offered medical assistance and is to have the right to a lawyer when giving testimony.

In a set of guidelines released at the same time as the letter and the new law, Francis specifies some of the groups inside the Vatican to which the law applies, and includes the clergy of St. Peter's Basilica, the clergy of the Vatican's parish church of Sant'Anna, and members of religious orders who live in the city-state.

The pope also names the staff and clergy of the St. Pius X Pre-Seminary, which is run by the Italian diocese of Como but located inside the Vatican.

The Vatican launched an investigation into the seminary last fall after an Italian book included allegations of sexual abuse at the institution, which is primarily a dormitory for young men who act as altar servers during morning Masses at St. Peter's Basilica.

The Vatican's chief prosecutor noted the case in his annual report, released in February, and said it involved conduct among students and that the investigation was proceeding with the "utmost care."

A version of this story appeared in the April 19-May 2, 2019 print issue under the headline: Francis mandates Vatican personnel report child abuse.