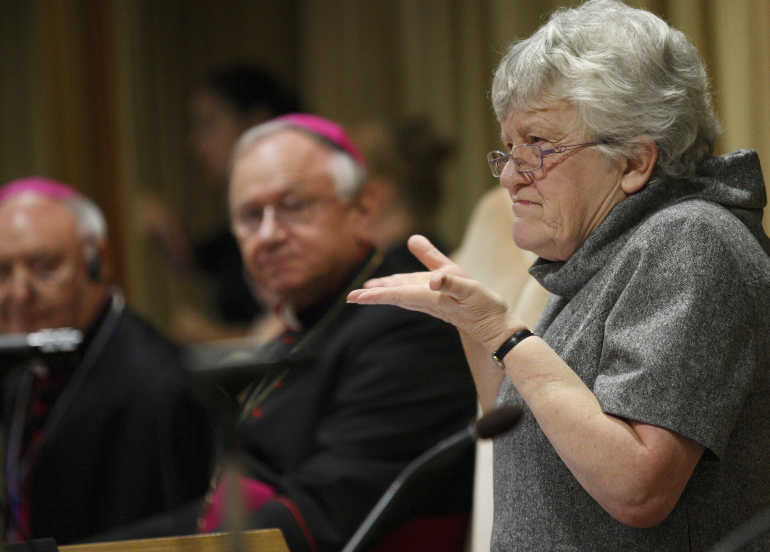 Maura Buckley, a teacher of deaf people and a catechist from Dublin, Ireland, speaks at a 2009 conference on "The Deaf Person in the Life of the Church" at the Vatican. (CNS/Paul Haring)

Pope Francis on May 11 formally created a new official ministry in the Catholic Church for those who teach the fundamentals of the faith to children and others, opening the position to "men and women of deep faith and human maturity."

Instituting a new ministry of "catechist" with the apostolic letter Antiquum Ministerium ("Ancient Ministry"), the pontiff said those who already serve as teachers of the faith in places across the world experience a spiritual calling to do so and are often leaders in their communities.

"The Spirit is calling men and women to set out and encounter all those who are waiting to discover the beauty, goodness and truth of the Christian faith," said Francis, explaining his decision to officialize the ministry in the document.

"It is the task of pastors to support them in this process and to enrich the life of the Christian community through the recognition of lay ministries capable of contributing to the transformation of society," said the pope.

In the Catholic Church, a catechist is someone who teaches the core principles of the faith. In earlier centuries, catechists were often priests or members of religious orders, but they are now frequently lay persons who volunteer or are sometimes employed at Catholic schools or parishes.

With the new document, issued motu proprio (on the pope's own initiative), lay catechists can be officially instituted into roles as ministers for their local dioceses and receive recognition for what the pope termed a "stable form of service rendered to the local Church."

Francis said the Vatican's Congregation for Divine Worship and the Discipline of the Sacraments "will soon publish" a rite of institution for the ministry, and that catechists should receive "suitable biblical, theological, pastoral and pedagogical formation" to succeed in their roles.

The pope also asked national bishops' conferences "to render effective" the new ministry and determine "the necessary process of formation and the normative criteria for admission" to the role.

Francis' opening of the new ministry of catechist to both men and women comes shortly after the pontiff made explicit in January that Catholic laywomen can also be formally installed in the church as lectors and acolytes (often known as altar servers).

Although women in many U.S. Catholic dioceses already served in those roles, the church's canon law had technically only allowed for their service on a temporary basis and according to the whim of the local bishop.

Francis has struggled throughout his eight-year papacy to better include women in the Catholic Church's leadership structure and ministries, and has repeatedly reaffirmed Pope John Paul II's ban on women's ordination to the priesthood.

Last year, the pope disappointed those campaigning for the church to return to the practice in early centuries of the faith of ordaining women as deacons, declining to answer a request from the Synod of Bishops for the Pan-Amazon region on the issue.

In the new document, the pope said that the early Christian community "was characterized by many different forms of ministry carried out by men and women who, obedient to the working of the Holy Spirit, devoted their lives to the building up of the Church."

"At times, the charisms that the Spirit constantly pours out on the baptized took on a visible and tangible form of immediate service to the Christian community, one recognized as an indispensable diakonia for the community," said Francis, using a Greek word that can mean "service."

Although Pope Paul VI's 1973 apostolic letter Ministeria Quaedam had envisioned that national bishops' conferences could ask the Vatican to formalize the ministry of catechists in their regions, the ministry had never been universally instituted before.

At a Vatican press conference May 11 presenting Francis' new letter, Italian Archbishop Rino Fisichella said the formalization of the ministry of a catechist "signals an important innovation."

"The institution of a ministry by the Church is confirmation that the person invested with that charism is performing an authentic ecclesial service to the community," said Fisichella, president of the Pontifical Council for the New Evangelization.

But the archbishop also said it was "obvious" that not everyone who is currently serving as a catechist will be formally installed into the new ministry.

"Of primary importance is the vocational dimension which implies a willingness to serve the Church where the bishop considers it most beneficial," said Fisichella. "Ministries are not conferred for personal gratification, but for service to be rendered to the local Church where the bishop deems the presence of the Catechist necessary."

Francis said in his letter that his institution of the new ministry of catechist would go into effect immediately.

The pontiff ended his letter by asking that bishops and priests cooperate with laypeople serving in the new role, quoting from the Second Vatican Council document Lumen Gentium: "Pastors ... know that they were not established by Christ to undertake by themselves the entire saving mission of the Church to the world.

"They appreciate, rather, that it is their exalted task to shepherd the faithful and at the same time acknowledge their ministries and charisms so that all in their separate ways, but of one mind, may cooperate in the common task."

A version of this story appeared in the May 28-June 10, 2021 print issue under the headline: Francis creates Catholic ministry of catechist.