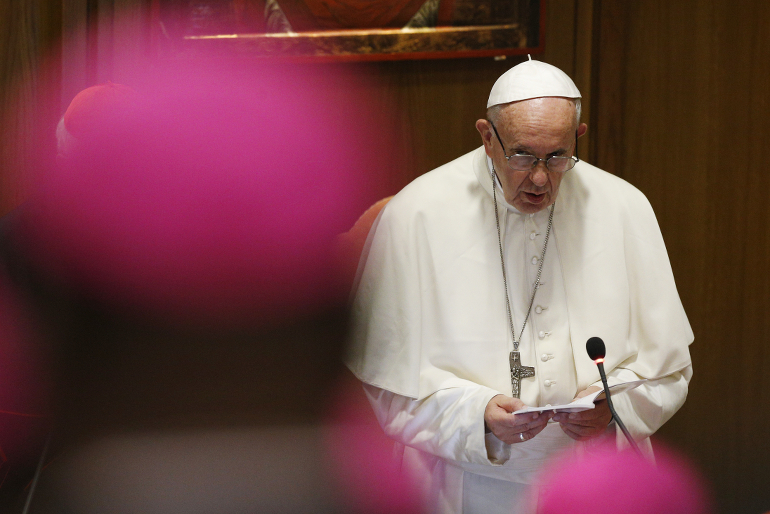 Pope Francis prays at the opening session of the Synod of Bishops on young people, the faith and vocational discernment at the Vatican Oct 3. (CNS photo/Paul Haring)

Pope Francis has ordered a "thorough study of the entire documentation" present in the Vatican's archives regarding now disgraced ex-cardinal Theodore McCarrick, in a move the Catholic Church's central command said is meant to "ascertain all the relevant facts."

In its first statement on the McCarrick scandal since one of its former ambassadors alleged a decades-long, systemic cover-up of allegations that the prelate was abusing seminarians, the Vatican also appeared to acknowledge that some of the archival material might reveal errors in judgment.

"The Holy See is conscious that, from the examination of the facts and of the circumstances, it may emerge that choices were taken that would not be consonant with a contemporary approach to such issues," said the Oct. 6 statement, released by the Vatican press office but described unusually as "from the Holy See."

Quoting from one of the talks Francis gave during his 2015 visit to the United States, the statement continued: "We will follow the path of truth wherever it may lead."

"Both abuse and its cover-up can no longer be tolerated," it said. "A different treatment for Bishops who have committed or covered up abuse ... represents a form of clericalism that is no longer acceptable."

The statement did not mention by name the allegations made by the former ambassador, Archbishop Carlo Vigano, but did reference "other accusations" made against McCarrick since his unprecedented July resignation from the College of Cardinals.

Vigano's allegations, released Aug. 26 as Francis was visiting Ireland, rocked the global Catholic Church. In an 11-page document, the former ambassador to the U.S. named dozens of former and current high-level Vatican officials as covering up for McCarrick.

The Italian archbishop also claimed that Pope Benedict XVI had imposed sanctions on McCarrick in 2009 or 2010 and that Francis had ignored or dispensed the prelate from those sanctions.

Vigano did not provide any evidence for his allegations. His document was also laced with ideological claims, and has since been revealed to have been drafted with the help of several right-wing figures in the church.

In the weeks since release of the bombshell letter, much focus has been on how and if the Vatican would respond. The Oct. 6 statement does not specifically address any of Vigano's claims, but said the pope is renewing "his pressing invitation to unite forces to fight against the grave scourge of abuse within and beyond the Church."

But in a series of shocking announcements in June, the archdioceses of New York, Newark, and Washington and the diocese of Metuchen revealed that McCarrick had been ordered by the Vatican to step down from active ministry after an allegation of sexual abuse was found "credible and substantiated."

The Oct. 6 statement revealed for the first time that the New York Archdiocese had informed the Vatican about an accusation against McCarrick in September 2017.

"The Holy Father ordered a thorough preliminary investigation into this, which was carried out by the Archdiocese of New York, at the conclusion of which the relative documentation was forwarded to the Congregation for the Doctrine of the Faith," said the release.

The statement added that the conclusions of the investigation into the ex-cardinal's behavior would be made public "in due course."

The Washington archdiocese announced last week that McCarrick had been moved out of the DC area to a friary in Kansas. The prelate has been ordered by Francis to lead a life of prayer and penance and is expected to undergo a canonical trial.

More details about the retired archbishop's abuse of young men over decades emerged after his removal from ministry in June, with news reports including revelations of sexual misconduct with two seminarians and 20 years of abuse of a boy that started when the child was 11 years old.

Many have raised questions about how the prelate continued to rise through the ranks of the church, and if others in authority were aware of the allegations being made against him.

The U.S. bishops' conference has asked Francis to consider conducting a special investigation, known as an apostolic visitation, into McCarrick's career. It is unclear if that inquiry is going forward.

In a Sept. 19 statement, the U.S. bishops announced they had approved the creation of a "third-party reporting system" to report future allegations of abuse by prelates, but did not detail exactly how that system would function or who would evaluate complaints once they were received.

The prelates are expected to discuss the McCarrick scandal at greater length during their annual meeting, to be held in Baltimore Nov. 12-14.

A version of this story appeared in the Oct 19-Nov 1, 2018 print issue under the headline: Vatican cardinal rebukes Vigano for accusations.