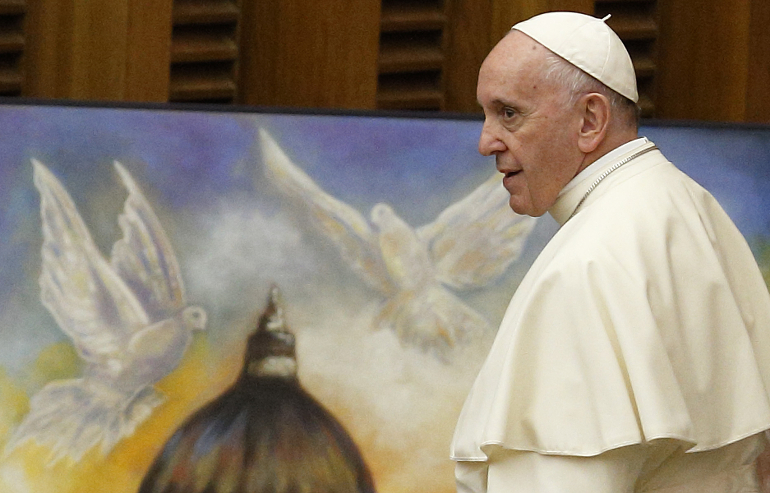 Pope Francis walks past artwork showing the dome of St. Peter's Basilica and two doves during his general audience in Paul VI hall at the Vatican Aug. 8. (CNS/Paul Haring)

Pope Francis has acknowledged that the Catholic Church "did not act in a timely matter" to protect children from sexually abusive priests over a period of decades, saying in a new letter to members of the Catholic faith around the world that the church "abandoned" minors to those who would abuse them.

"With shame and repentance, we acknowledge as an ecclesial community that we were not where we should have been ... realizing the magnitude and the gravity of the damage done to so many lives," the pontiff says in the letter, released Aug. 20 in response to the Pennsylvania grand jury report.

"We showed no care for the little ones; we abandoned them," the pope states.

In the three-page letter, addressed to the "People of God," Francis also says the church has "delayed" in implementing measures to protect children and to hold those who have abused them to account.

Praising zero-tolerance policies and "ways of making all those who perpetrate or cover up these crimes accountable," the pontiff states: "We have delayed in applying these actions and sanctions that are so necessary, yet I am confident that they will help to guarantee a greater culture of care in the present and future."

Although Francis does not outline specific steps for the church to adopt going forward, he says "no effort must be spared" to protect children and calls on Catholics globally to consider taking up the spiritual practices of prayer and fasting to foster solidarity with those who were harmed.

"I invite the entire holy faithful People of God to a penitential exercise of prayer and fasting," the pontiff states. "This can awaken our conscience and arouse our solidarity and commitment to a culture of care that says 'never again' to every form of abuse."

Francis' letter comes six days after the Aug. 14 release of the grand jury report, which revealed that at least 1,000 minors were abused by Catholics priests across six dioceses in the state of Pennsylvania over a period of seven decades.

The pope's letter, which the Vatican says was written in Spanish, Francis' native language, begins with a quote from St. Paul's first letter to the Corinthians: "If one member suffers, all suffer together with it."

"These words of Saint Paul forcefully echo in my heart as I acknowledge once more the suffering endured by many minors due to sexual abuse, the abuse of power and the abuse of conscience perpetrated by a significant number of clerics and consecrated persons," the pontiff states.

"Looking back to the past, no effort to beg pardon and to seek to repair the harm done will ever be sufficient," he continues. "Looking ahead to the future, no effort must be spared to create a culture able to prevent such situations from happening, but also to prevent the possibility of their being covered up and perpetuated."

Although the pontiff does not refer in the letter to the grand jury report by name, he states that "a report was made public" recently that "detailed the experiences of at least a thousand survivors."

"Even though it can be said that most of these cases belong to the past, nonetheless as time goes on we have come to know the pain of many of the victims," the pontiff states. "We have realized that these wounds never disappear and that they require us forcefully to condemn these atrocities."

Francis says that not only priests but all Catholics should be involved in the church's efforts to protect young people.

"Every one of the baptized should feel involved in the ecclesial and social change that we so greatly need," he states. "This change calls for a personal and communal conversion."

"Without the active participation of all the Church's members, everything being done to uproot the culture of abuse in our communities will not be successful in generating the necessary dynamics for sound and realistic change," the pope continues later.

The pontiff directs some of the strongest words in his letter against clericalism, which he says "leads to an excision in the ecclesial body that supports and helps to perpetuate many of the evils that we are condemning today."

"To say 'no' to abuse is to say an emphatic 'no' to all forms of clericalism," he states.

At the end of the letter, Francis says "it is essential that we, as a Church, be able to acknowledge and condemn, with sorrow and shame, the atrocities perpetrated by consecrated persons, clerics, and all those entrusted with the mission of watching over and caring for those most vulnerable."

"Penance and prayer will help us to open our eyes and our hearts to other people’s sufferings and to overcome the thirst for power and possessions that are so often the root of those evils," the pope continues. "May fasting and prayer open our ears to the hushed pain felt by children, young people and the disabled."

The Vatican first responded to the Pennsylvania report with a short statement from the press office Aug. 16 that called the acts documented in the report "criminal and morally reprehensible."

Francis has been under intense scrutiny over his actions to root out clergy sexual abuse throughout 2018, which began with a January trip to Chile during which the pontiff defended his appointment of a bishop accused of covering up for an abusive priest.

The pope later apologized, and has since removed five Chilean bishops, including the one he had earlier defended.

Francis is preparing now for an Aug. 25-26 trip to Ireland, which like the U.S. was rocked by revelations of clergy abuse in the 1990s and 2000s. Many Irish survivors of abuse are calling on the pope to use his visit to admit to the Vatican's role for decades in helping cover-up abuse cases on the island.