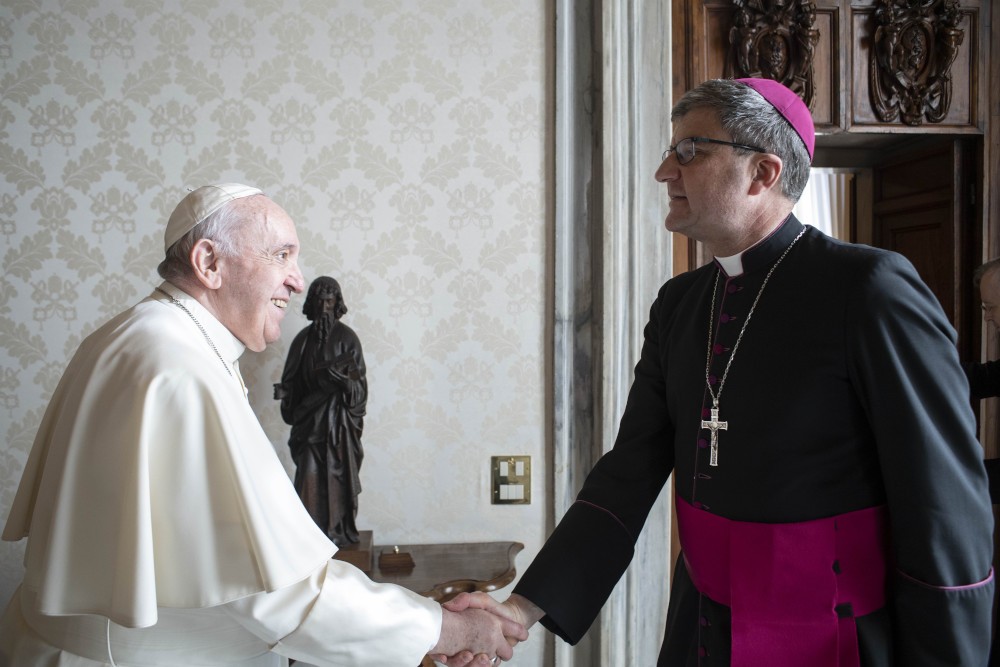 Pope Francis greets Archbishop Éric de Moulins-Beaufort of Reims, president of the French bishops' conference, during a meeting at the Vatican Dec. 13, 2021. The archbishop announced a change in the agenda for the conference's assembly Nov. 3-8, 2022, to discuss the case of a French bishop who was disciplined by the Vatican after being credibly accused of sexual misconduct. (CNS photo/Vatican Media)

The French bishops' conference overhauled its agenda for its November plenary meeting to deal with "the anger, shame, powerlessness (and) incomprehension" they and their people felt after discovering that a bishop allowed by the Vatican to retire actually was disciplined for sexual abuse.

Archbishop Eric de Moulins-Beaufort of Reims, president of the bishops' conference, announced the changed agenda Nov. 3 and urged his fellow bishops to have as their first concern "the victims, those who spoke out two years ago and more recently, and those, perhaps, who have not yet made themselves known."

The archbishop was referring to the case of retired Bishop Michel Santier of Créteil. When the Vatican announced in 2021 that the bishop was retiring, the bishop had said it was for health reasons. No one contradicted him publicly until mid-October,  when the Diocese of Créteil confirmed he had been credibly accused of sexual misconduct and disciplined by the Vatican.

The bishops, who were meeting in Lourdes, acknowledged the sense of betrayal felt by people in the Diocese of Créteil, the archbishop said, as well as "the anger, shame, discouragement and weariness of the most committed faithful, deacons, priests, seminarians." Those feelings, he said, are "reaching a new level, no doubt unbearable for some."

"All of us are shaken, personally and in our apostolic authority in the service of the Lord Jesus and the people of God, by suffering a collective criticism for a matter that most of us have had nothing to do with," he said.

The permanent council of the bishops' conference decided, he said, to add to the meeting a discussion about the facts in the case of Santier, a review of the procedures that exist to verify their implementation, to understand the requirements of the law of our country and of canon law, but also the expectations and needs of the victims and of the people of God."

A civil lawyer, a canon lawyer, an official of the Dicastery for the Doctrine of the Faith and the nuncio were scheduled to speak, the archbishop said.

Cardinal Pietro Parolin, Vatican secretary of state, sent a letter to the bishops on behalf of Pope Francis expressing his support, but not specifically mentioning Santier or the Vatican's role in withholding the reason for his stepping down.

"At a time when the church of France is once again shaken by the drama of abuse on the part of some of its pastors," the cardinal wrote, Francis "invites you, with your eyes fixed on the cross of Christ, not to be discouraged but to persevere in the assurance that the Holy Spirit will accompany your efforts."

"You are called to address the wounds of the people of God," Parolin wrote, and especially the wounds "of the victims of these abuses, but also all who are scandalized, disappointed and tested, particularly your priests whose beautiful ministry is dishonored and made even more difficult, and who need your closeness more than ever."

And regarding a scheduled discussion of the pastoral care of Catholics attached to the pre-Vatican II Mass and disappointed by Francis' decision to restrict celebrations, the cardinal said the pope asked the bishops to show them special care; "they often are wounded sheep who need to be accompanied, listened to and given time."