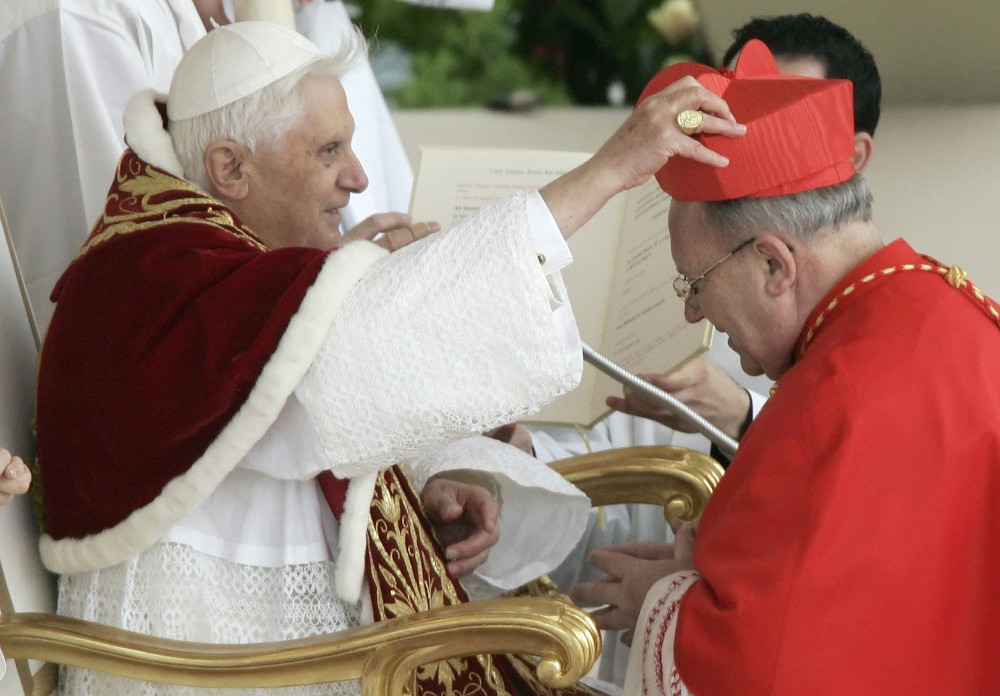 French Cardinal Jean-Pierre Ricard of Bordeaux receives his red hat from then-Pope Benedict XVI during his induction into the College of Cardinals at the Vatican March 24, 2006. The cardinal has admitted to abusing a 14-year-old girl 35 years ago. (CNS photo/Tony Gentile, Reuters)

The revelation came in a letter from Ricard read by Archbishop Eric de Moulins-Beaufort of Reims, president of the bishops' conference, during a news conference on abuse Nov. 7, during the French bishops' general assembly.

The cardinal said the "reprehensible" action occurred when he was a priest, and he said his behavior "has necessarily caused serious and lasting consequences for this person."

"This is a difficult process. But what comes first is the suffering experienced by the victims and the recognition of the acts committed," he said.

"Finally, I ask forgiveness to those whom I have hurt and who will live this news as a real test," he said.

The cardinal did not provide additional details.

He is a member of the Dicastery for the Doctrine of the Faith, the Vatican office charged with investigating clerics accused of abuse.

Moulins-Beaufort said the cardinal was among 11 bishops or former bishops who are being or have been investigated by church or judicial authorities for abuse.

Four days earlier, the archbishop had rearranged the bishops' schedule to deal with abuse and urged his fellow bishops to have as their first concern "the victims, those who spoke out two years ago and more recently, and those, perhaps, who have not yet made themselves known."

The archbishop was referring to the case of retired Bishop Michel Santier of Créteil. When the Vatican announced in 2021 that the bishop was retiring, the bishop had said it was for health reasons. No one contradicted him publicly until mid-October, when the Diocese of Créteil confirmed he had been credibly accused of sexual misconduct and disciplined by the Vatican.

The bishops, who were meeting in Lourdes, acknowledged the sense of betrayal felt by people in the Diocese of Créteil, the archbishop said, as well as "the anger, shame, discouragement and weariness of the most committed faithful, deacons, priests, seminarians." Those feelings, he said, are "reaching a new level, no doubt unbearable for some."

"All of us are shaken, personally and in our apostolic authority in the service of the Lord Jesus and the people of God, by suffering a collective criticism for a matter that most of us have had nothing to do with," he said.

The Vatican did not immediately say what, if any, disciplinary measures would be taken against 78-year-old Ricard, who retired in 2019 as archbishop of Bordeaux. The possibilities range from being ordered to live a life of prayer and penance out of the public view to being removed from the College of Cardinals or even from the priesthood, although that usually is a punishment reserved to serial abusers.

In the 1990s, Austrian Cardinal Hans Hermann Groër was forced to step down as archbishop of Vienna and eventually to relinquish all public ministry after allegations of the sexual abuse and harassment of seminarians and priests; he died in 2003 without having undergone a canonical trial.

Pope Benedict XVI forced Scottish Cardinal Keith O'Brien to step down as archbishop of St. Andrews and Edinburgh in early 2013; after an investigation, Pope Francis withdrew his "rights and duties" as a cardinal, although he retained the title until his death in March 2018.

And, in the case of Theodore McCarrick, the former cardinal and archbishop of Washington, Pope Francis initially suspended him from ministry and removed him from the College of Cardinals in 2018 after an investigation found "credible and substantiated" allegations of abuse. The pope removed him from the priesthood in 2019 after a Vatican trial found him guilty of "solicitation in the sacrament of confession and sins against the Sixth Commandment with minors and with adults, with the aggravating factor of the abuse of power."