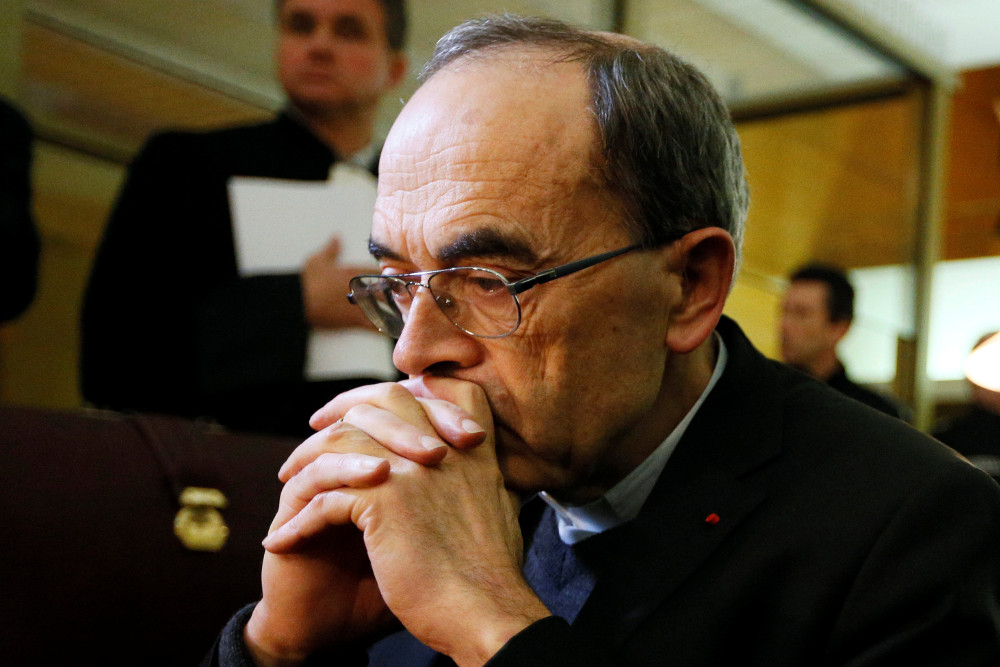 French Cardinal Philippe Barbarin of Lyon pauses at the courthouse Jan. 7 in Lyon. Barbarin and others are on trial for failing to discipline a local priest who allegedly abused children while running a Scout group in the 1980s. (CNS/Vatican Media)

A French cardinal took the stand in court Jan. 7, the first day of a civil trial for church officials accused of covering up abuse by a priest.

Cardinal Philippe Barbarin, 68, testified in the case against him and others accused of covering up abuse by Fr. Bernard Preynat, who has confessed to abusing minors at Lyon's Saint-Luc Parish, where he ran a large Catholic Scout group in the 1970s and 1980s.

French newspapers said Preynat had been moved to a new parish in Neulise after his crimes were reported to Lyon Cardinal Albert Decourtray, who died in1994. Preynat was removed from parish work in August 2015. He reportedly has written some of his victims and confessed abuse; his trial will be separate.

Nine people who said Preynat abused them brought the case to court, saying church officials were aware of Preynat's actions for years, but allowed him to be in contact with children until 2015.

The Associated Press reported Jan. 7 that prosecutors initially threw out the case for insufficient evidence. Barbarin's lawyer says his client never obstructed justice because the statute of limitations had passed on the acts in question by the time Barbarin was informed.

At the trial, Barbarin said when he initially heard of the accusations, he encouraged one of the alleged victims to contact other victims and, "thanks to that," the case against Preynat was able to be built, AP reported.

Barbarin testified that he sought counsel on how to handle abuse accusations against Preynat from the Vatican's Congregation for the Doctrine of the Faith.

"Rome told me to remove him from his parish," AP reported Barbarin as testifying. "I have never tried to hide facts and even less to cover these facts."

Spanish Cardinal Francisco Ladaria Ferrer, then secretary and now head of the Vatican's doctrinal congregation, is also named in the trial. However, in September the Vatican informed the French government that any conversation Ladaria may have had with Barbarin regarding the case would have occurred within the context of exercising his official functions on behalf of the pontiff and, as such, would be covered under internationally recognized immunity rules.

The French Catholic daily La Croix reported the victims are seeking a symbolic compensation of one euro and want to continue to appeal for an end to the three-year statute of limitations in cases of pedophilia.

La Croix reported the plaintiffs hope to prove that the archbishop and his entourage failed in their obligation to report Preynat's acts of sexual abuse, not only when they first learned of these acts but also for a long time afterward when they kept them a secret.