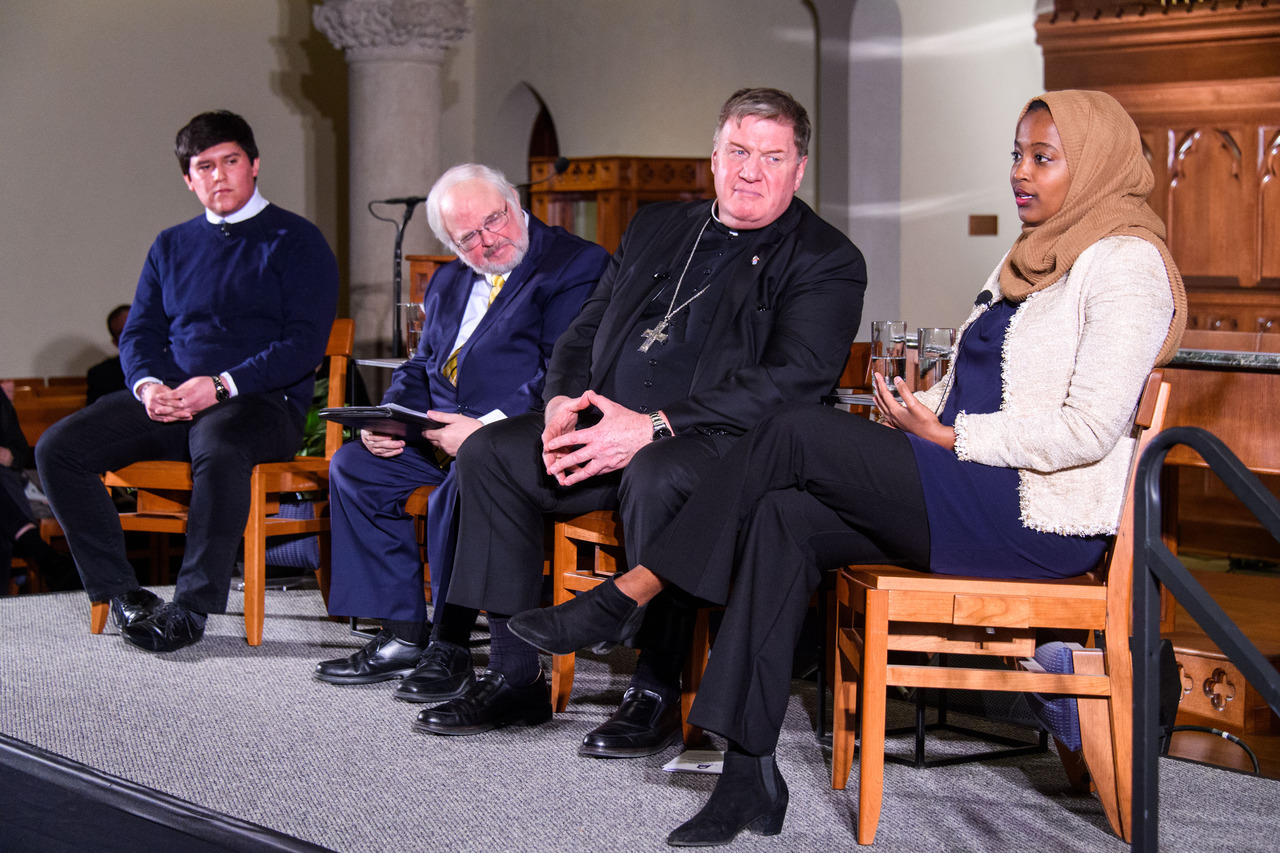 'Sharing the Journey with Immigrants and Refugees'

The conversation, "Sharing the Journey with Immigrants and Refugees," was one of a series of Dahlgren Dialogues co-sponsored by Georgetown's Initiative on Catholic Social Thought and Public Life and the Office of Mission and Ministry. Find more information on the series at http://bit.ly/2dAFu9q.

In a freewheeling conversation Feb. 5 inside a packed chapel on Georgetown University's campus, Newark, New Jersey, Cardinal Joseph Tobin, a Redemptorist priest known for accompanying migrants to deportation hearings and his commitment to the poor, minced no words about immigration.

"I think if we're going to sign off on a deal, we'd better understand what's really being exchanged," Tobin said, noting that the views were his own and not necessarily those of the U.S. Conference of Catholic Bishops, which is advocating narrow immigration reform focusing on a path to citizenship for Dreamers.

"If we accept a deal uncritically, thinking that's all we can get, we may actually be establishing a foundation that will result in greater harm."
—Cardinal Joseph Tobin

"I fully support a clean DACA bill, and I think any sort of tit for tat on this one is very dangerous," he said bluntly.

Noting that the administration's budget proposal to Congress includes significant asks for additional detention beds and an expansion of U.S. Immigration and Customs Enforcement, or ICE, Tobin cautioned that a slippery slope of mass deportations could lie ahead.

"If we accept a deal uncritically, thinking that's all we can get, we may actually be establishing a foundation that will result in greater harm," he said.

With the Feb. 8 deadline for Congress to pass budget legislation and avoid a second government shutdown looming, a deal to extend protection for Deferred Action for Childhood Arrivals (DACA) recipients hangs in the balance over demands for concessions from Democrats on border security.

Temporary protected status for DACA recipients runs out March 5. The program is being used as a bargaining chip by the Trump administration in exchange for funding for a border wall, an end to so-called "chain migration," and an end to the diversity visa program.

Tobin shared the stage with John Carr, director of the Georgetown Initiative on Catholic Social Thought and Public Life, and two Georgetown students brought to this country illegally as children. 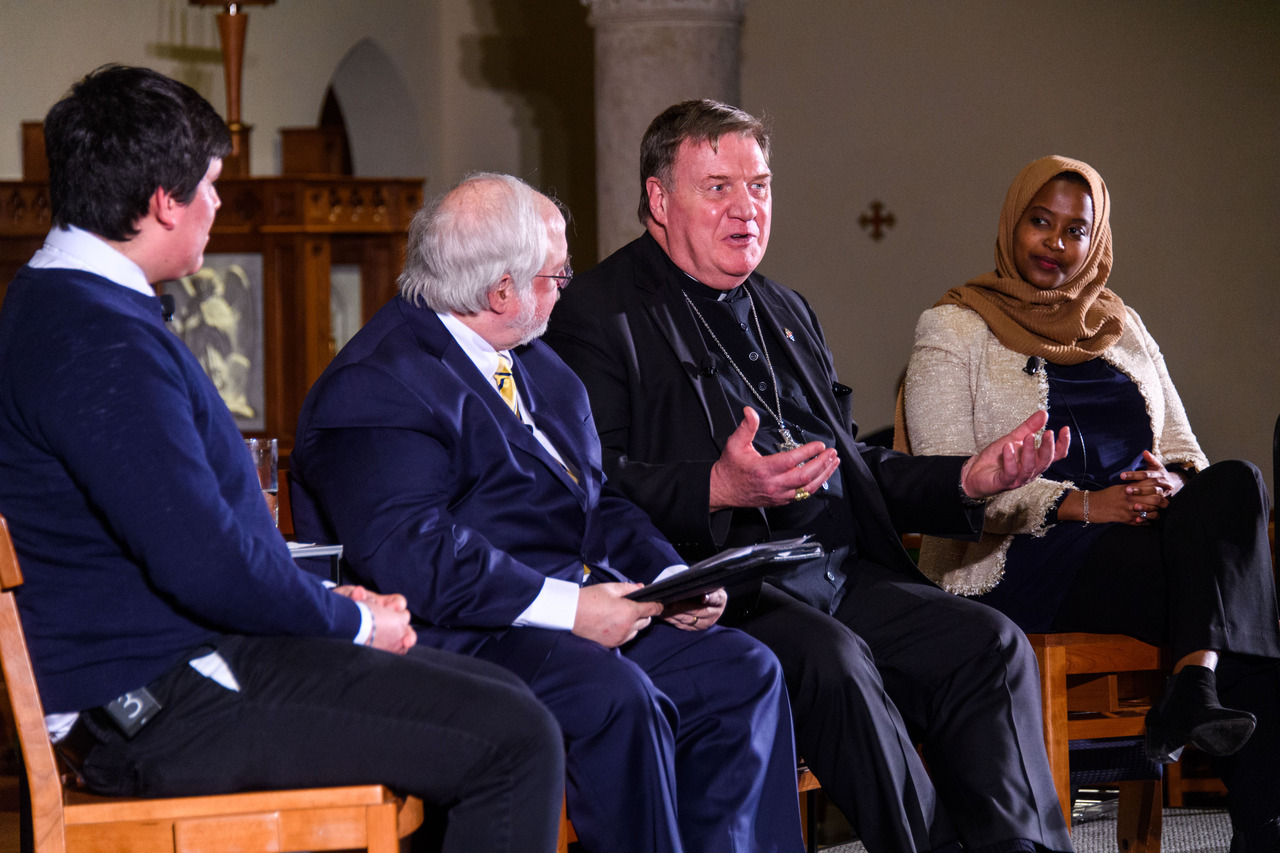 Their presence brought home the Gospel message that Tobin has been relentlessly sharing with parishioners and legislators alike: that the story of Christ, the refugee, is a story of "scandalous migration," and that we must humanize our brothers and sisters who are immigrants, because we, too, were once aliens.

"Religious leaders must stand with immigrants to put a face on them," he said. On this matter, he believes Pope Francis has set the tone for the church, identifying migration and immigration as the defining issue of his papacy, a responsibility that lies "on his (Francis') heart and on the church."

Georgetown University has been vocal in its support of Dreamers, young men and women who were brought to this country illegally as children and who seek lawful, permanent resident status under the DREAM Act. An NPR/Ipsos poll shows that about two-thirds of the American public favors granting legal status to Dreamers, although the Dream Act of 2017 has not been passed by either house of Congress.

DACA, passed in 2012, provides temporary lawful status with work authorization to approximately 690,000 young immigrants currently enrolled in the program. DACA recipients are a subset of the Dreamer population, which numbers approximately 3.2 million, according to the Migration Policy Institute.

Mizraim Belman Guerrero, a junior at Georgetown, shared his story of coming to the United States at the age of 2 with his mother and brother to be reunited with his father. Guerrero said he didn't understand what it meant to be undocumented until 2011, when his father was arrested after a traffic stop, detained, and put into deportation hearings.

"Again, I was growing up without a father," he said. Two years later, Guerrero and his brother "heckled" then-President Barack Obama at a speech in Austin, Texas, and ended up with an invitation to speak with the president backstage. The two shared their story of lives growing up undocumented. The DACA program was announced the following year.

A DACA recipient, Guerrero said he can't plan beyond his 2020 graduation, nor can he travel abroad, although he'd like to visit his two remaining grandparents in Mexico, to confer upon them his college degree, because, he said, "it's for them."

Habon Ali was also on the stage. A native of Kenya who will graduate from Georgetown this spring, she came to the U.S. at the age of 8 and lived with her family for a time in a homeless shelter.

They came, she said, to live the American dream. "To follow the yellow brick road," Habon said. What they got was something else. "In my eyes, we came from poverty to poverty."

Tobin, who shared his Irish grandmother's immigration story, gently debunked the idea that working-class Americans have something to fear from immigrants. He blamed an alarmist, 24-hour news culture for fanning the flames of intolerance and condemning immigrants to live in the shadows.

"Even without the Christian ethic, people of goodwill wonder why the most helpless and vulnerable among us are singled out for such inhumane treatment," he said. Like Ali's family, many of them have found something quite different from what they hoped they would find when they fled poverty or violence or both in their home countries.