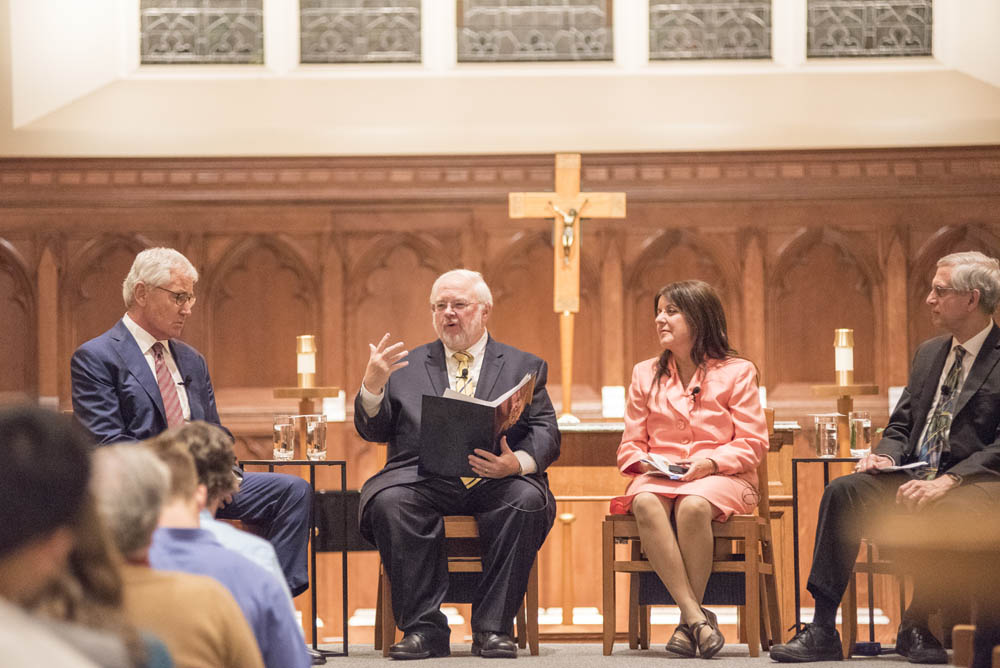 For those who fear the Trump administration is heading precipitously toward nuclear conflict with North Korea, last week's discussion at Georgetown University was either comforting or alarming, depending on your perspective.

The first in a series of Dahlgren Dialogues, co-sponsored by the Initiative on Catholic Social Thought and Public Life and the Office of Mission and Ministry at Georgetown, the Nov. 2 discussion drew several hundred people to Dahlgren Chapel on Georgetown's campus. It featured three speakers who addressed the moral, human and policy questions surrounding nuclear arms and North Korea: Stephen Colecchi, director of the Office of International Justice and Peace at the U.S. Conference of Catholic Bishops; Maryann Cusimano Love, associate professor of international relations at the Catholic University of America; and Chuck Hagel, former U.S. secretary of defense and former Republican senator from Nebraska.

In an opening prayer, Jesuit Fr. Greg Schenden referenced the "rancorous noise" of our current politics and called for Catholic leaders "to become salt, light, and leaven in public life." What followed was a thoughtful conversation about the state of world affairs and the possible role of Catholic social teaching in bringing a sense of stability to an inherently unstable situation. 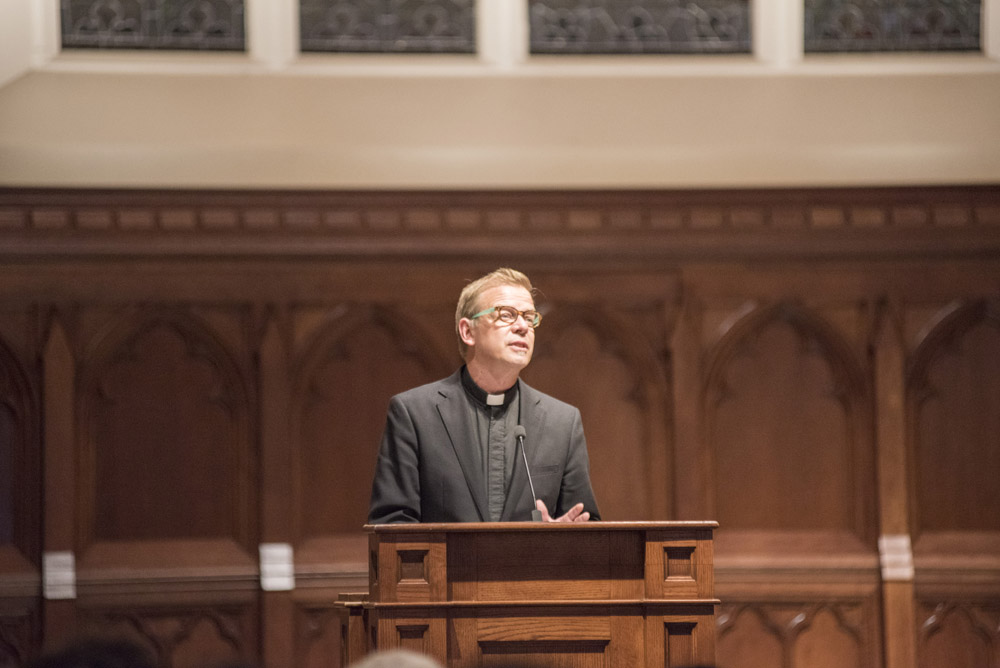 Citing Pope John XXIII's 1963 papal encyclical on nuclear disarmament, Pacem in Terris ("Peace on Earth"), Colecchi said, "The church has serious moral questions and has condemned absolutely the use of nuclear weapons," and has further only allowed for "strictly conditioned moral acceptance of deterrence as a step toward disarmament."

While the church's teaching is always to protect the value and dignity of the human person, he said, there is also the question of the common good to consider, both individually and more broadly. "The church speaks of international common good, that the good of each nation depends on trying to achieve good in a global society. In isolation, no nation can secure itself."

Hagel, a Vietnam War veteran, stated emphatically that there is no acceptable military solution to the puzzle of North Korea, as any action against them would surely lead to millions of South Korean casualties, as well as the potential for thousands of American and Japanese casualties.

"After World War II, we built a world order around common interests," he said, adding, "not because we had any great affection, necessarily." He called for a return to the dialogue that is required to rebuild such a world order, especially between the U.S. and North Korea, which has of late been reduced to the rhetoric "of a bunch of seventh graders."

Turning the conversation to the Christian tradition and how it could contribute to such a dialogue, Cusimano Love referenced the just war and just peace theories.

"Just war tells you how to limit conflict and the limitations on ways to use force. The just peace tradition tells you how to get there," she said, adding, "We don't want to be making desolation and call it peace," a reference to the Roman orator Tacitus's description of the Pax Romana.

The just war tradition says that force must always be the last resort of a legitimate authority, proportionate, distinguish between combatants and noncombatants, and entered into with the goal of reestablishing peace, among other things. To that end, they called for review of Congress's 2001 Authorization for Use of Military Force.

In August, the U.S. bishops sent a letter to Sen. Jeff Flake (R-Arizona) and Sen. Tim Kaine (D-Virginia) supporting their efforts to update the Authorization for Use of Military Force and limit the executive branch's authority to wage war without oversight from Congress.

All three speakers called for international dialogue in which the United States is a participant but doesn't necessarily take the starring role in what is, at its heart, a conflict between the two Koreas, said Colecchi. He said the Catholic Church in South Korea has been quietly working toward that end, calling for a political, not a military, solution.

"The only way you can transform a relationship is by talking," he said, and the church is a natural for that role. "The church has a lot of experience with dialogue, with how societies are knit together in the wake of war, with how you build relationships that are lasting and mutually beneficial," he said.

Cusimano Love seconded this sentiment, calling it an "absolutely false dichotomy" that faith has no place in the resolution of international conflicts.

"The best policies have moral and legal support. The more legal and moral support, the more resources are available to address whatever the problem is," she said. "Those are institutionalized in our policies — our military code of conduct, the Geneva Conventions. The DNA of all of those tools of our national security hardball policy is our faith and moral traditions."

John Carr, director of the Initiative on Catholic Social Thought and Public Life and the discussion's moderator, expressed doubt that the North Korean regime could be enticed into true multilateral dialogue.

"I'm skeptical," Carr said. "The record of that regime engaging in dialogue is weak."

Colecchi, however, holds out hope that not only is such dialogue possible, but that the church can be instrumental in bringing it to fruition.

"I think too often, people weaponize faith in the public sphere rather than have faith be a basis for dialogue and conversation," he said. "The role of religion is to be a unifying force. I think authentic faith has that potential."