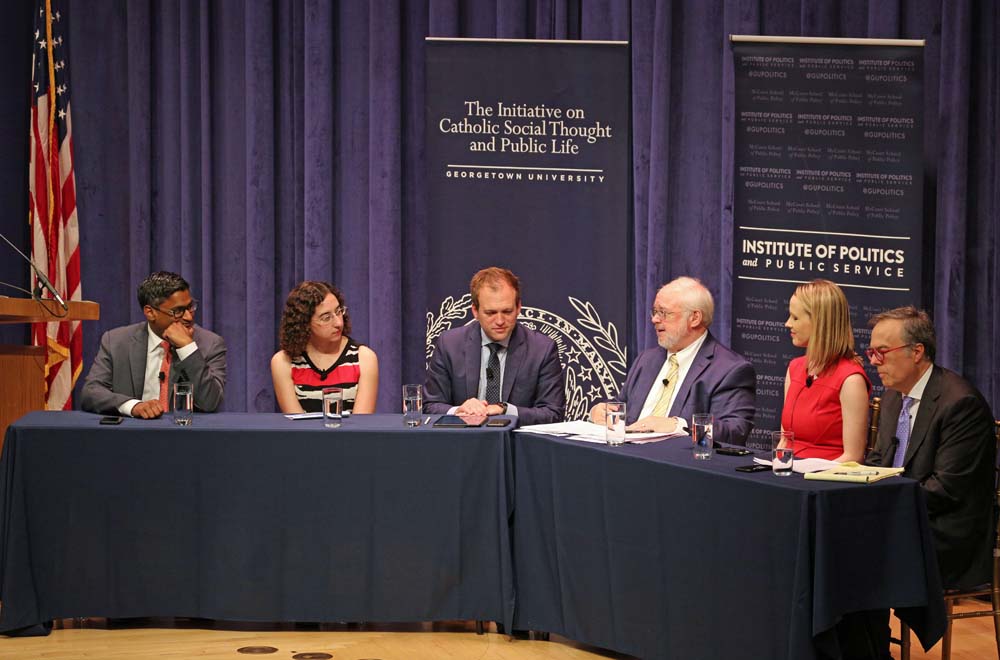 Figures from across the conservative landscape gathered at Georgetown University May 14 to discuss questions such as does the Republican Party have a "religion problem," and whether religion contributes to polarization or can help overcome divisions.

The panel of five plus moderator John Carr, who heads Georgetown's Initiative on Catholic Social Thought and Public Life, did not reach consensus on the issues and only once veered toward something a bit more contentious than spirited debate. The event was cosponsored the with Georgetown's Institute of Politics and Public Service.

Carr opened the session, which was punctuated throughout by the sound of heavy thunder outside, by noting that those who believe there is "no compatibility" between religion and politics were not invited to participate. This was the second of three planned roundtable discussions on "Faith and the Faithful in U.S. Politics."

The conversation ran the gamut, from data points about evangelical Christians to meditations on the theology of President Donald Trump to the recent forced resignation (and subsequent reinstatement) of the Catholic chaplain of the U.S. House of Representatives.

The basis of Trump's appeal to conservative evangelical Christians — and specifically, as was pointed out repeatedly during the evening, to white evangelicals — was a major theme.

Emily Ekins, a research fellow and director of polling at the Cato Institute, a libertarian think tank, set the conversational stage with some surprising statistics about the religious habits and social views of Trump supporters.

Ekins cited data from a 2017 survey of 8,000 voters by the Democracy Fund Voter Study Group. She looked at the religious habits of Trump supporters and found that their support for his policies and ideologies varied widely depending on their own habits of church attendance. That is, the greater their church attendance, the more they disagreed with Trump on the treatment of immigrants and minorities, among other things.

"What we find is that people who attend church more regularly have more favorable opinions of minorities compared to people who never attend church," she said, adding that, despite what many people believe, evangelical churchgoers are not Trump's base, but an atmosphere of hyperpartisanship prompted many to vote for him, just the same.

Trump supporters who attend church regularly also favored immigration reform and providing a path to citizenship for immigrants already in this country, by as much as 20 to 30 points, she said, over those who did not attend church regularly. They were also less likely to support a travel ban and more likely to express concern for care of the poor.

"Religion seems to play a moderating force when it comes to issues of tolerance/difference, such as race, immigration, and living in a more diverse, multicultural society," Ekins concluded, "but at the same time, fewer Republicans are attending church. So the very force that could moderate is receding."

Julie Zauzmer, religion reporter for The Washington Post, observed that politics is changing and, in some cases, splitting religious communities, a trend she has seen accelerate under Trump.

"To see people of different political stripes under one church roof is increasingly rare. Ask what a person's religion is and you know their politics," she said, recounting a thanksgiving service she attended at an evangelical church about an hour outside of D.C. the night after the election in 2016. 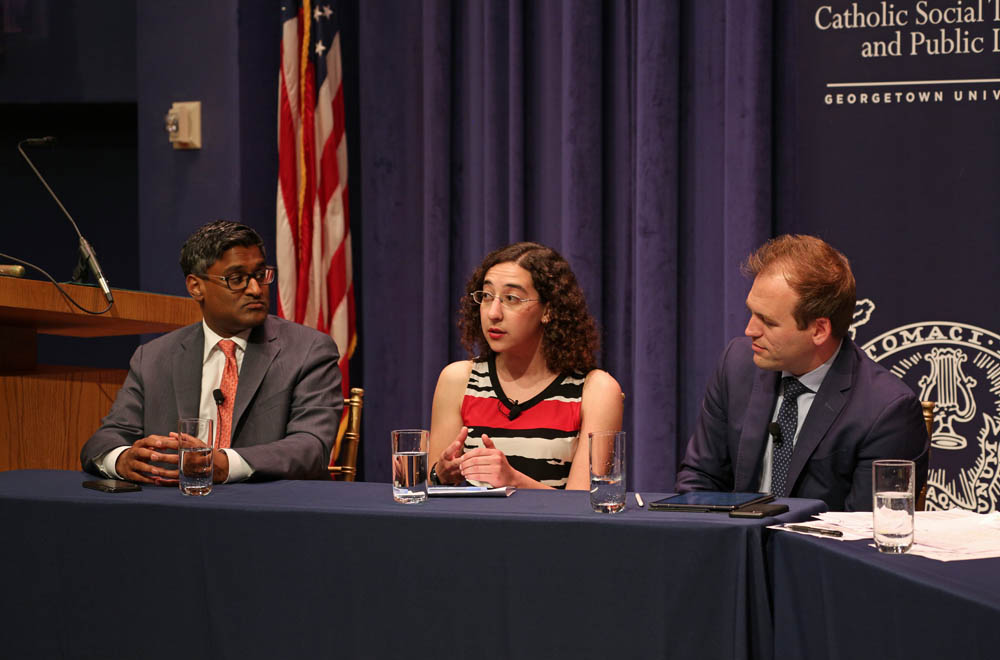 She described a scene of relief among the congregants, but not because they felt that Trump shared their values or beliefs. They didn't.

"They felt the culture had been moving away from them for eight years," Zauzmer said, and that Trump might halt or at least slow that process.

"Look, I think a lot of people recognize the president is a lowlife and were willing to support him," Ponnuru said, drawing applause from the crowd and a strong response from evangelical minister Johnnie Moore, an informal advisor to the Trump administration.

"That is inside the Beltway speak," Moore shot back, later calling for an end to superficial punditry and more coming together across political divides on issues of common cause. "The response of this audience is precisely what the problem is."

Moore praised Trump for his ongoing and what he believes to be very authentic conversation with the evangelical community even as his co-panelists remarked that Trump has not reached out to religious leaders of other faith traditions.

Michael Gerson, a Washington Post columnist, conservative Christian, and speechwriter for President George W. Bush, has written on religion and politics extensively since the election. He punctuated his remarks about the "hostile takeover" of the Republican Party with gallows humor about the "very upbeat" meeting he and his fellow remaining compassionate conservative had just held in a phone booth.

Lauding the if-then tradition of Catholic social teaching — if you are pro-life, for instance, then you can't also dehumanize immigrants — Gerson expressed concern that evangelicals are making political and social calculations "from the perspective of perceived aggressions of modernity rather than looking at first principles."

"This is why evangelicals are not just an interest group like a union," Gerson said, while articulating the fear that the short-term gain of the Trump presidency will have a long-lasting and possibly irreversible effect on future generations of Republican voters. "They are supporting the reputation of the Christian Gospel and making decisions that alienate the young and minorities from this cause."

For more on this series of dialogues, visit https://catholicsocialthought.georgetown.edu/topics/public-dialogues-on-catholic-social-thought

* The captions to the photos with this story have been edited to correct the date.

A version of this story appeared in the June 1-14, 2018 print issue under the headline: Georgetown panel debates faith and the GOP.