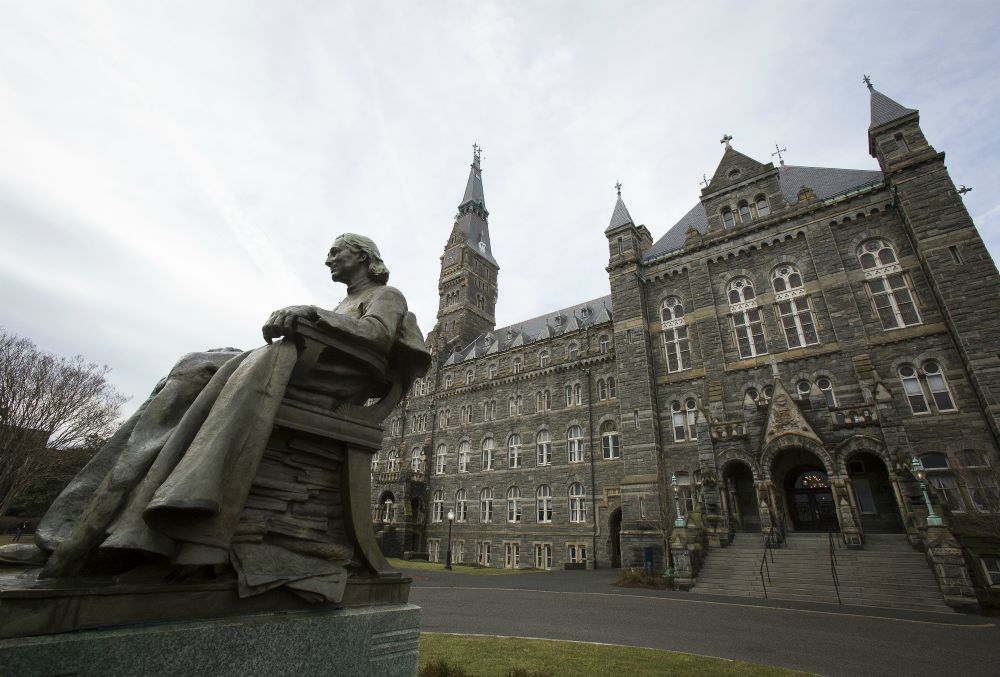 The news of Georgetown University's recent decision to privately negotiate with union-aspiring graduate students, who also teach or conduct research, is reverberating on other Catholic campuses. But the decision, reversing the school's refusal to negotiate late last year, leaves some worried about the precedent it sets as it skirts National Labor Relations Board (NLRB) jurisdiction.

At Loyola University Chicago, a Catholic school that said last year that it wouldn't negotiate with the Service Employees International Union-backed Loyola Worker Coalition, graduate students see the Georgetown agreement as the result of the mobilization of a university community to pressure the administration that they can emulate, said Ruby Oram, a doctoral candidate, teaching assistant, and member of the Loyola student group. But however pragmatic the agreement is, Oram isn't thrilled about the need for arbitration and private elections.

"I think it is unfortunate that graduate workers feel forced to sidestep the NLRB entirely and forego a process of federally-protected mediation due to our current political climate," she said.

In an April 2 letter to the Georgetown community, two executive vice presidents wrote that the school reached an agreement with the Georgetown Alliance of Graduate Employees (GAGE) allowing students with professional duties — such as teaching assistants and associates and research assistants — to vote this spring whether to join the American Federation of Teachers. Georgetown still maintains the students aren't workers but hedges that "they should have a stronger voice regarding the terms under which they serve as graduate student assistants."

Most notably, the agreement states that both parties, to the extent that is legal, will negotiate privately rather than under the jurisdiction of the National Labor Relations Act. This comes at a time when critics say that President Donald Trump's appointee to chair the National Labor Relations Board has an anti-union reputation, and graduate student groups at several schools, including Boston College, have withdrawn petitions to the NLRB, apparently fearing wide-reaching decisions from the government agency that they wouldn't approve of.

At Loyola, the climate hasn't been hopeful, and an April 4 protest drew 300 people, including professors who canceled classes, after non-tenure track faculty couldn't reach an agreement with the administration after 22 months of bargaining, according to Oram.

"We in the graduate student union and the non-tenure track faculty union continue to remind the university of its Jesuit social justice teachings until they practice what they preach," she said.

Back in Washington, things look different to members of the Georgetown community, who see their success as a recipe that other Catholic schools ought to emulate.

"So many other universities are fighting graduate unions, and the NLRB is threatening to take unionization rights away from graduate assistants," said history professor Joseph McCartin, who directs Georgetown's Kalmanovitz Initiative for Labor and the Working Poor. "That this will be an election overseen by a nongovernmental third party will make this significant, no matter what the NLRB decides. This could prove to be a model elsewhere as a result."

Graduate students are confident about the upcoming election, according to Deidre Nelms, a third-year doctoral student in philosophy and a GAGE organizer. "It took some time and serious public pressure, but by signing this election agreement, Georgetown upheld its own commitments and set an example for other private universities to follow," she said.

GAGE wanted a third-party, private election, after University of Chicago graduate students couldn't get their administration to join the bargaining table even after a landslide election, and Loyola still refuses to bargain after its graduate students voted to unionize. Georgetown's framework reflects students' desire to "set mutual standards, avoid expensive and unproductive legal disputes, and show that it is possible for private universities to hold binding elections outside of the NLRB," Nelms said.

Chad Frazier, a sixth-year doctoral student in history and member of the GAGE election negotiation committee, calls the agreement a "major victory for graduate workers at Georgetown and across the nation." Negotiations, he said, will center on wages, healthcare, family leave policy, waivers for tuition and fees, and grievance procedures.

"There is plenty of work for us to do in the coming weeks and months," he said.

The agreement, Frazier hopes, will become a model for colleagues at Boston College, Loyola, and other Catholic schools "that have refused to acknowledge their graduate workers' moral and legal right to unionize and fight for better living and working conditions."

McCartin, the Georgetown professor, sees the university's decision to allow graduate students to decide if they want a union as a "deeply-important precedent for labor relations in private colleges and universities." As the first Catholic institution to agree to possibly certify a union of graduate students outside of an NLRB process, Georgetown sets a precedent both for higher education at large, and for religious schools, he added.

For schools that have resisted graduate student unions on the belief that the NLRB will reverse its 2016 decision — that graduate students who are teachers and research assistants do have collective bargaining rights — the agreement establishes that these graduate students have a fundamental right to bargain collectively, according to McCartin. "Graduate assistants at such institutions are likely to ask why their administrations cannot be as enlightened as Georgetown's," he said.

And Georgetown's decision, insofar as it provides a rubric for unionization outside of governmental involvement, proves that collective bargaining doesn't threaten a school's religious character.

"As this precedent demonstrates," McCartin said, "Catholic colleges and universities are free to negotiate fair and free independent union certification mechanisms just as Georgetown has done."