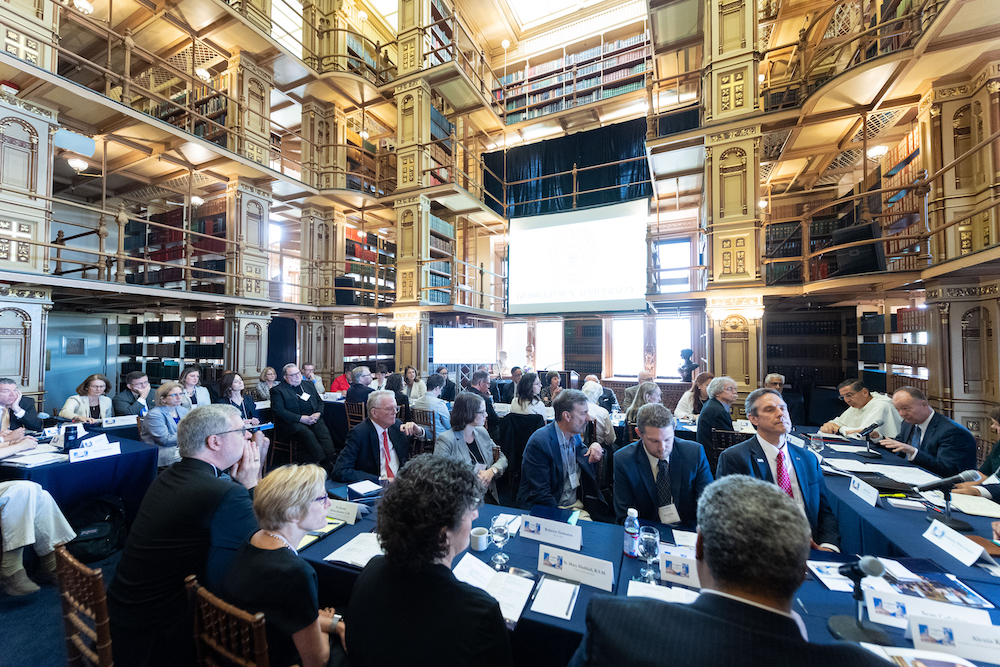 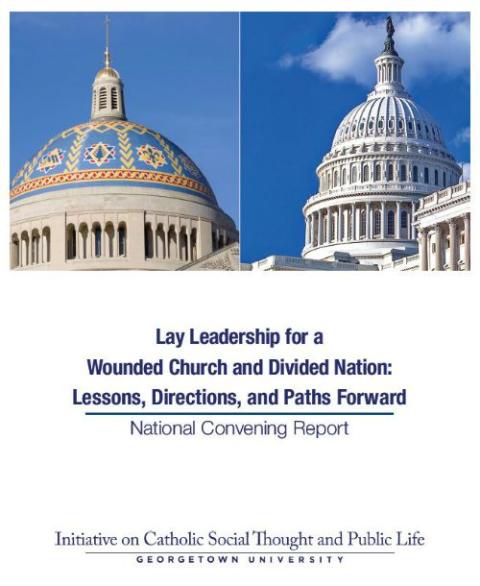 Clip from cover of "Lay Leadership for a Wounded Church and Divided Nation: Lessons, Directions, and Paths Forward" by Georgetown University's Initiative on Catholic Social Thought and Public Life

In order to best address the twin crises of clergy sexual abuse and leadership failure, a report released Nov. 4 by Georgetown University recommends placing victim-survivors at the center of the response and confronting clericalism.

The report titled, "Lay Leadership for a Wounded Church and Divided Nation: Lessons, Directions, and Paths Forward," was created by Georgetown's Initiative on Catholic Social Thought and Public Life. It reflects and summarizes key ideas and proposals from a June 14-15 national convening here of more than 50 mostly lay Catholic leaders from across the United States.

According to the report, participants engaged in candid and strategic discussions on four linked goals: sharing lessons learned from the clergy sex abuse crisis, strategizing on directions for reform and renewal; examining neglected costs of the crisis, and exploring how principles of Catholic social thought can help advance protection and accountability.

The report outlines 10 strategic directions that emerged from discussions at the national convening:

In explaining its first strategic direction, the report writes that the "failure to listen and believe victim-survivors" were the "original sins of the sexual abuse crisis."

"As the church seeks repentance, justice, reform, and renewal, we must listen to victim-survivors, their families, and all those affected by clergy sexual abuse. There are still not enough victim-survivors in the rooms when decisions are made," the report states.

The report also states that the clergy sexual abuse crisis "cannot be discussed honestly without recognizing the toxic culture of clericalism." Clericalism, the report argues, can lead to abuses of power and contributes to institutional cover-ups.

"We need a new culture of candor that calls on laypeople inside and outside of ecclesial structures to challenge the insular and self-reinforcing culture of some chanceries and ecclesial institutions," it states.

Before its public release, Kim Daniels, co-director of Georgetown's Initiative on Catholic Social Thought, presented a summary of the report's findings at a Nov. 4 evening panel discussion at Georgetown on current developments in the sexual abuse crisis.

"Those of us who participated in this convening are committed to focusing on our Gospel mission, on building unity, and on service to the least of these," Daniels said. "And in doing so, we stand together with the victim-survivors of clergy sexual abuse and humbly pledge to work to help ensure integrity and accountability and to find ways to repair, renew, and revitalize the church's mission in the world."

John Carr, the Initiative's other co-director, said that he believes the national convening "was the most substantive, most strategic, most candid, and most productive discussion" he has been involved in related to the crisis throughout his career.

"I think the convening can help us get to a better place," Carr said.

Read this next: Catholic groups weigh in with ideas for bishops' meeting on how to 'solve' abuse crisis