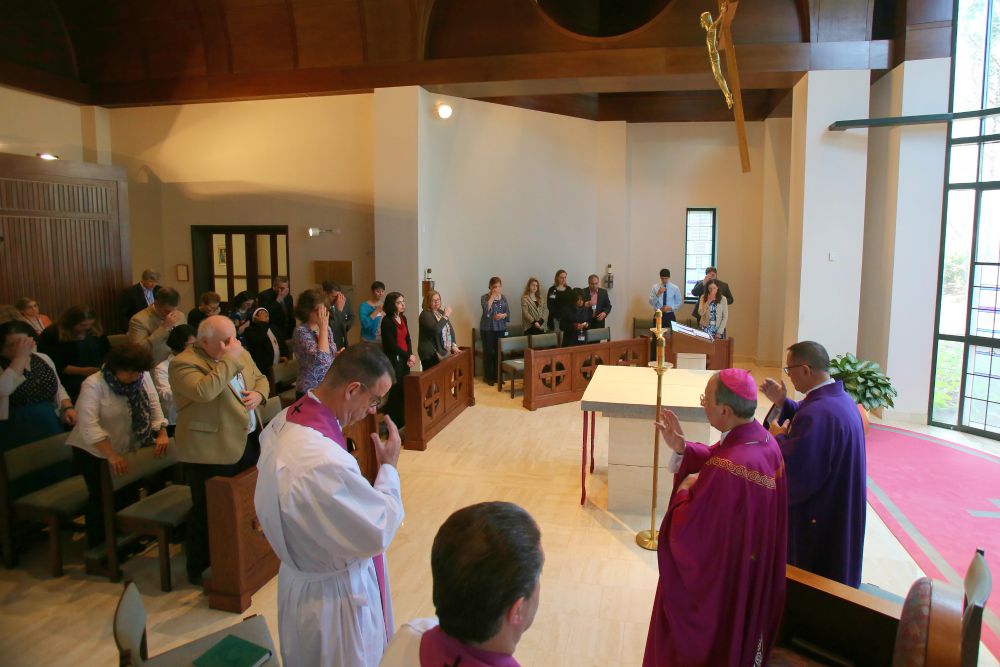 Baltimore Archbishop William Lori gives the final blessing after celebrating a Mass with special intentions for survivors of abuse and for abuse prevention in the chapel the headquarters of the U.S. Conference of Catholic Bishops in Washington April 8. At left is Msgr. J. Brian Bransfield, general secretary of the conference, and far right, Deacon Bernie Nojadera, executive director of the bishops' Secretariat for Child and Youth Protection. (CNS/Bob Roller)

As the U.S. bishops prepare to meet June 11-14 in Baltimore, with sex abuse concerns at the top of their agenda, they don't lack for advice.

Across the Catholic spectrum, groups and individuals have issued statements and offered declarations about how to fix the church.

John Carr, a retired staff member for the U.S. bishops and now director of the Initiative on Catholic Social Thought and Public Life at Georgetown University, urged the bishops to keep their focus.

"Empathy, urgency and action," should be their mantra, he told NCR.

He sees Pope Francis' latest letter issued motu proprio (on his own initiative), a document that called for worldwide accountability to address the issue of sex abuse, as a recognition by the Vatican that sex abuse "is a global problem that requires local action."

The pope's directive cites bishops as accountable for their personal actions as well as failure to address sex abuse in their dioceses, a concern that grew after the revelations about former Washington, D.C., cardinal Theodore McCarrick last year.

Carr, a survivor of sex abuse inflicted while he was a young seminarian, said that whatever the bishops come up with, it should involve the participation of laypeople in diocesan boards and in judgements of offending priests and bishops.

That view is not unique to Carr. Across the Catholic ideological spectrum, the call for lay involvement is a unifying message. Beneath that, differences about what change is needed come less from a liberal/conservative split than they do from divisions between those who still retain some trust in the bishops and those who don't. The issue has been debated and argued about for more than three decades since NCR first published accounts of sex abuse in the Diocese of Lafayette, Louisiana, in June 1985.

Those who think that bishops can still get the church on track include the leadership of the Napa Institute, an organization for active Catholics with wealth and traditional leanings.

"This is not a liberal or conservative issue. We have minors and adults that are being preyed on that need to be addressed. The pope's motu proprio is a start," Tim Busch, a co-founder of the Napa Institute, told NCR. The group sponsored an "Authentic Reform" conference last year to address sex abuse concerns.

In frequent writings and talks over the past year, Busch has urged expansion of lay diocesan boards to investigate sex abuse cases, a reform that grew out of the 2002 "Charter for the Protection of Children and Young People" enacted by the U.S. bishops.

Carl Anderson, Supreme Knight of the Knights of Columbus, focused on the need for clergy to live up to the promises of celibacy. In a statement released soon after the McCarrick issue became public, Anderson said "priests and bishops who refuse to live according to their promises of celibacy should be removed from public ministry, not out of retribution, but for the protection of the faithful and to prevent future variations of the scandal we now suffer."

Anderson also came out in support of lay boards to investigate sex abuse and including bishops among clergy who fall under zero-tolerance policies. He urged encouraging reporting cases of abuse, with promises not to punish whistleblowers.

The idea of involving laypeople is largely non-controversial, yet how that concept gets implemented is what the bishops will be debating at their June meeting. At their November 2018 meeting, a proposal that would create lay boards to judge bishops was tabled, to await the development of a "metropolitan plan" said to be more in line with what Francis then developed after a February Vatican summit.

Supporters of lay boards with authority vested by archbishops note that the concept effectively worked in the McCarrick case, which grew out of a complaint of sexual abuse lodged in the New York Archdiocese. 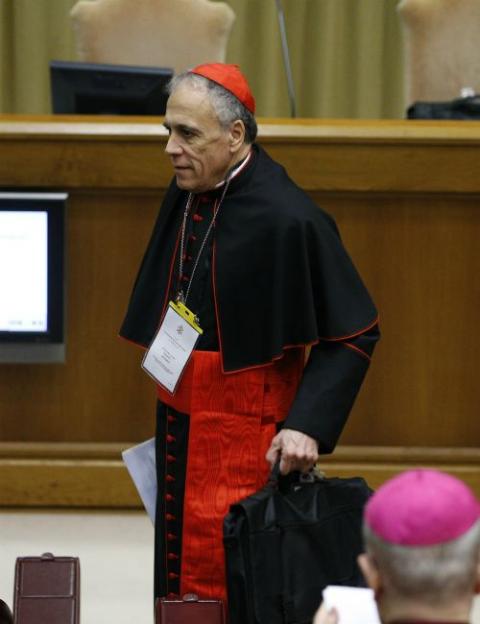 Cardinal Daniel DiNardo of Galveston-Houston, president of the U.S. Conference of Catholic Bishops, arrives for the third day of the meeting on the protection of minors in the church at the Vatican Feb. 23. (CNS/Paul Haring)

The metropolitan concept is being tested as well in the Diocese of Wheeling-Charleston, West Virginia, where Baltimore Archbishop William Lori has taken charge of an investigation into complaints against retired Bishop Michael Bransfield.

As the church careened through the past year's crisis, which included a highly-publicized Pennsylvania grand jury report describing hundreds of sex abuse cases from the 1950s onwards, universities and professional organizations devoted panel discussions and seminars to examining its roots and possible solutions.

The Catholic University of America was among them, as well as Jesuit institutions such as Georgetown University and Fordham University. At Canisius College in Buffalo, New York, another Jesuit institution, lay president John Hurley became instrumental in forming the Movement to Restore Trust, a reform group aimed at changing practices in the hard-hit Buffalo Diocese.

After Buffalo Bishop Richard Malone provided a list of 42 priests implicated in sex abuse, the list was updated to include more than 100. In a diocese where many Catholics thought the abuse crisis had largely passed them by, the revelations were a shock.

The Movement to Restore Trust group met in late fall and early winter and came out with recommendations. Leaders of the group met with Malone and agreed to expand the diocese's finance council to include more lay women, sponsor listening sessions with abuse survivors, and expand reporting of sex abuse cases.

The group also called for the end to the isolation of the local seminary (the diocese recently suspended three priests accused of inappropriate remarks to seminarians and leaders there have been accused of sexual harassment).

The Leadership Roundtable, a group devoted to promoting better management practices in dioceses and church organizations, also examined the sex abuse crisis at a summit it convened in February in Washington. Participants included representatives from 47 dioceses.

Out of the summit, participants advised bishops that they admit their leadership failures, regularly engage survivors, and "acknowledge that the Church is wounded, recognize the post-traumatic stress that these issues have placed upon clergy and laity."

The Leadership Roundtable summit called for establishing "a national or metropolitan independent, lay-led entity that will address misconduct of bishops and bishop accountability and will include transparency during and after an investigation."

It called for better screening of priesthood candidates as well as seminary curriculum that addresses abuse prevention and educates on human formation, and to "engage laity, including women, on personnel boards for clergy."

Kim Smolik, chief executive officer of the Leadership Roundtable, said the summit emphasized the need for "accountability, transparency and co-responsibility" in church leadership. While the sex abuse crisis has been well studied, she said, the need to address its root causes, which she described as clericalism, needs to be examined.

For too long, she said, Catholic life has nurtured "a culture that put clerics at the center," attitudes which fostered the crisis of coverup and a lack of leadership.

While the bishops hope that the June meeting will allay concerns, some see lay Catholics as experiencing a kind of "Charlie Brown moment," ready to kick the football, only to have it pulled away.

C. Colt Anderson, a professor of theology at Fordham University with an expertise in church history, says the pope's recent intervention will make it more difficult for the bishops to implement reforms. The Francis document offers guidelines but no real enforcement, he told NCR.

Transparency on sex abuse is left to each bishop, and that is the problem, he said. The plan that was tabled at the bishops' November meeting was an imperfect effort to assert lay control over sex abuse concerns, he said, but it is a better idea than the metropolitan concept being promoted from the pope's document.

Lay boards, said Anderson, "need to be established in a way that they can function independently of the bishops." 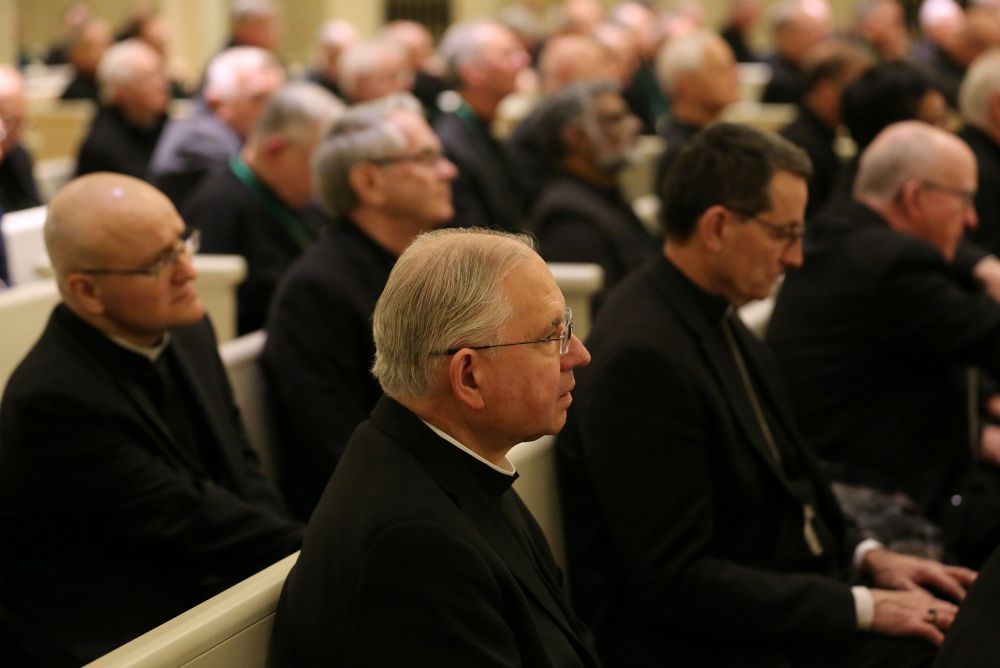 Archbishop Jose Gomez of Los Angeles, vice president of the U.S. Conference of Catholic Bishops, center, attends a prayer service in the Chapel of the Immaculate Conception at Mundelein Seminary Jan. 2 at the University of St. Mary of the Lake in Illinois, near Chicago. during a retreat suggested by Pope Francis in September. (CNS/Bob Roller)

American corporate life, with its focus on human resource regulations, can teach the bishops how to accomplish oversight, he said. Anderson suggested that dioceses convene synods at which laypeople could be elected to serve on independent boards to oversee sex abuse concerns.

Lay Catholics now rely on whether they have a bishop committed to transparency. That is not enough, said Anderson.

"That's why they lose credibility. The bishop holds the juridical power," he said. The two most public examples of cover-up and abuse among American bishops — the cases of McCarrick and the late Boston Cardinal Bernard Law — both involved metropolitan bishops, said Anderson.

Terry McKiernan of BishopAccountability.org, which tracks sex abuse cases in dioceses throughout the world, said the bishops need to empower lay boards by designating them not only as consultative, but as decision-makers.

He said they should urge the Vatican to be more transparent in the cases it handles, as well as provide better oversight of Eastern church eparchies in the United States.

They also need to ask, "What are they doing about the men in their ranks? What do they do about their members who are credibly accused?" He noted that some bishops such as John Nienstedt, accused of sexual harassment and covering up crimes, still retain their privileges. And, he said, the conference should look to leadership from bishops such as Bernard Hebda of St. Paul and Minneapolis, Minnesota, and Steven Biegler of Cheyenne, Wyoming, who have proven to be willing to address sex abuse concerns in their own dioceses.

Some remain pessimistic that even with changes bishops can provide the needed leadership.

Dominican Fr. Tom Doyle, a canon lawyer who has long sparred with bishops over the sex abuse crisis, offered them succinct advice: "Tell them to help humanity and quit," he told NCR.

Carr, for one, is more likely to trust that the bishops can somehow emerge with a renewed church.

To do that, he emphasized that lay boards should be drawn from a wide spectrum, not just those with corporate leadership experience, and reflect the wider church. A Latino carpenter or an astute parish secretary or religious educator have practical experience to share, he said.

Carr warned about groups using the crisis to extend their goals beyond sex abuse, what he described as weaponizing the crisis. "This is not about ecclesiology or about ideology. It is about abuse of power."

Carr, long involved in social ministry, noted that the church needs to regain credibility if it will speak effectively to the wider world. The church's voice in support of the unborn, the poor and the undocumented is muted in the current atmosphere.

"This needs to be fixed," he said.

[Peter Feuerherd is a correspondent for NCR's Field Hospital series on parish life and is a professor of journalism at St. John's University, New York. Dan Morris-Young, NCR West Coast correspondent, contributed to this story.]