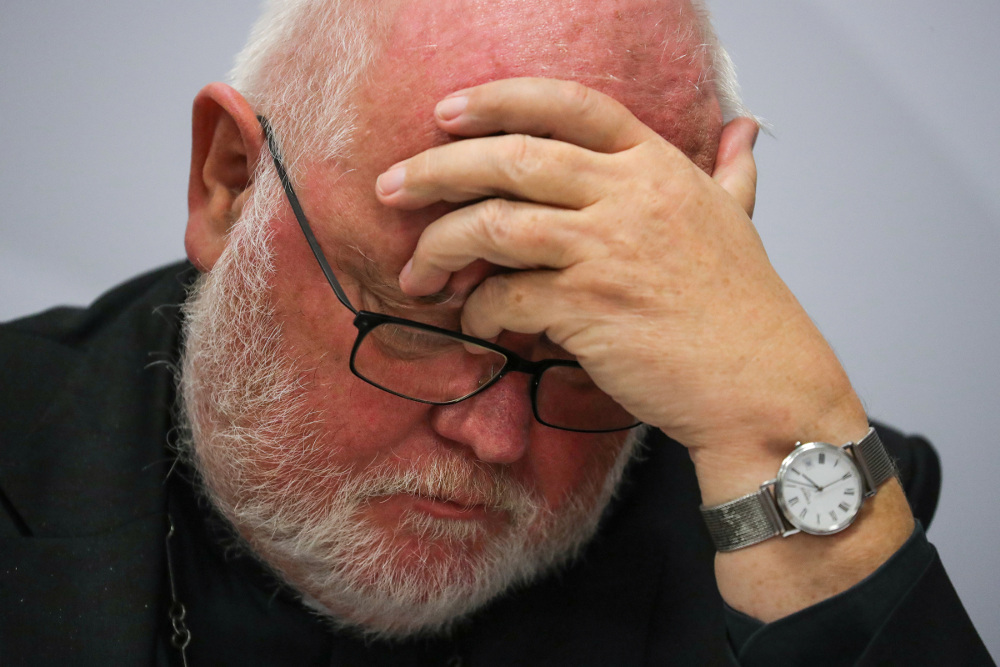 Cardinal Reinhard Marx of Munich reacts Sept. 25 during a presentation of a study on sexual abuse in the German church. (CNS/Armando Babani, EPA)

The head of the German bishops conference formally apologized for sexual abuse in the church, saying it "has been denied, turned away from and covered up for far too long."

"Sexual abuse is a crime," Cardinal Reinhard Marx of Munich and Freising told a news conference Sept. 25 in Fulda, Germany. "And whoever is guilty of it must be punished by law."

The bishops met in a plenary session in Fulda and released a study, conducted on behalf of the bishops' conference from 2010 to 2014, on abuse. The study, leaked earlier in September, researched an estimated 3,700 sex abuse cases in the German church.

Marx said that, although prevention measures had been put in place by the bishops' conference, it was not enough.

"I feel shame for looking away from many who did not want to believe what happened and who did not provide care for the victims. That also applies to me," the cardinal said. "We did not listen to the victims."

"As a church, we want to build up new trust. I know that many people do not believe us anymore. And I understand that," he said. "But I hope very much that we can earn trust again."

Criminologists who conducted the study were present in a panel to discuss their findings and answer media questions.

The details of the research project's findings in all 27 German dioceses were released. Ten dioceses were selected for research dating back to 1946. Within the remaining 17 dioceses, the research focused only on abuse dating from 2000. The names of those accused were withheld from the document.

In the Diocese of Trier, records dating from 1946 implicated 148 priests and left an estimated total of 442 victims, of whom 252 were male. The study results from Trier have garnered much attention from German media outlets.

Bishop Stephan Ackermann of Trier, bishops' conference spokesman on sexual abuse and protection of youth, had strongly condemned the release of the research study to the public, calling it "irresponsible and premature."

At the news conference, Ackermann said his encounters with victims had an "existential and emotional" effect on him and promised improvements in financial compensation for victims.

The leaked research report shocked Germans and has provoked a strong reaction from media and the general public. Multiple bishops have received hate mail since the study was published, according to SWR radio.

Details about the abuse continue to emerge as media and members of the public examine the data released in individual regions and dioceses for the first time.

Marx called the news conference "an important day for the history of the church in Germany" and said bishops want to cooperate with victims going forward.

"The results of this study show us that we still have to make more progress," he said.