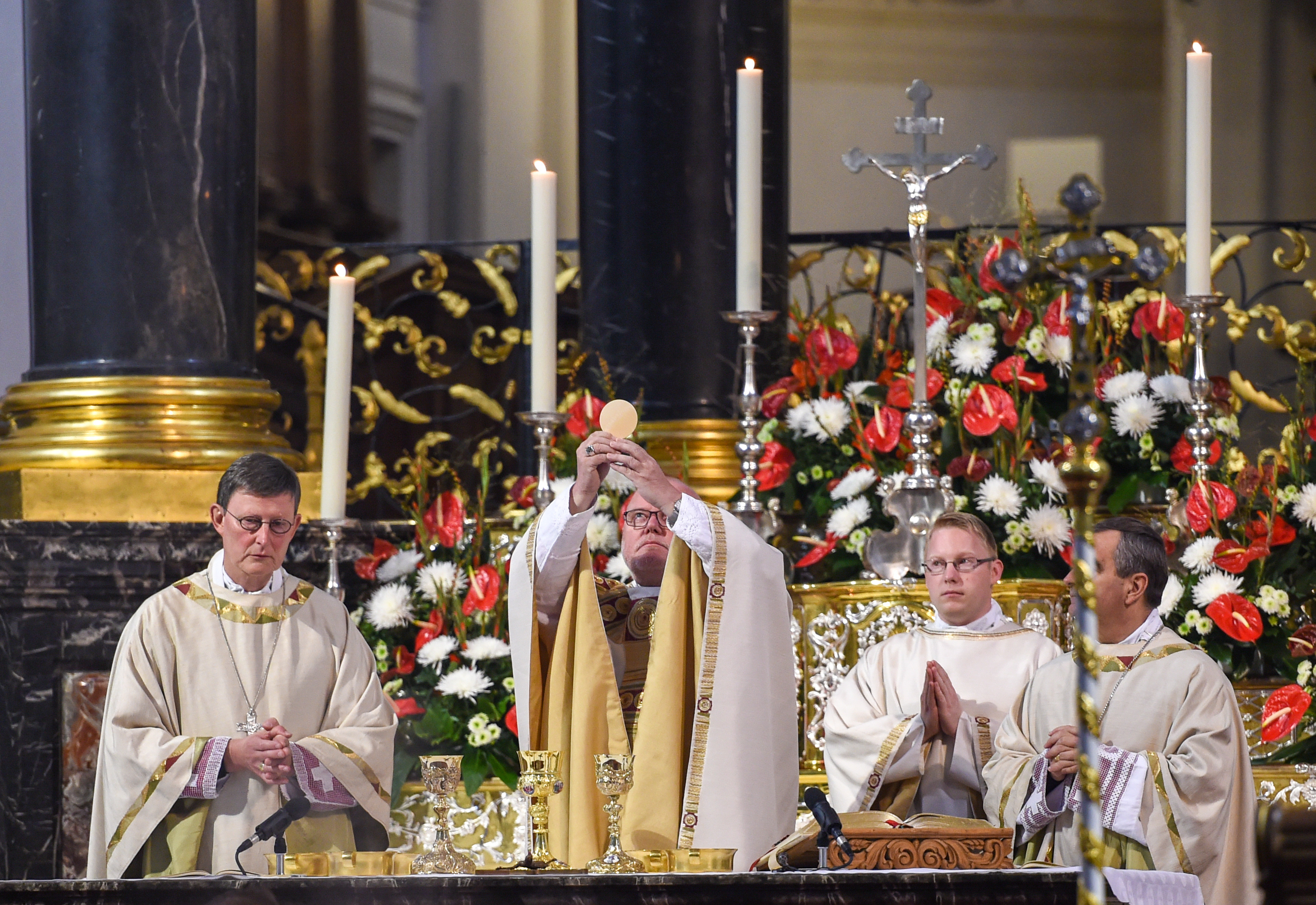 Cardinal Rainer Maria Woelki of Cologne, Germany, and Cardinal Reinhard Marx of Munich elevate the Eucharist during Mass in the cathedral in Fulda, Germany, Sept. 23, 2014. Six German bishops will meet May 3 with Vatican officials to discuss German plans to allow greater access to the Eucharist for Protestants married to Catholics. (CNS/Jorg Loeffke, KNA)

Cardinal Reinhard Marx of Munich and Freising, president of the German bishops' conference, had announced in February that three-quarters of the German bishops approved the development of pastoral guidelines for determining situations in which a non-Catholic spouse married to a Catholic could receive Communion.

But a month later, seven German bishops, including Cardinal Rainer Maria Woelki of Cologne, sent a letter to Archbishop Luis Ladaria, prefect of the Congregation for the Doctrine of the Faith, and Cardinal Kurt Koch, president of the Pontifical Council for Promoting Christian Unity, saying they believed a bishops' conference does not have the authority to expand permissions for non-Catholics to receive Communion.

The seven bishops asked the Vatican officials for a ruling on the matter.

The press office announcement said, "a group of German cardinals and bishops will meet some dicastery heads and officials of the Roman Curia at the Vatican to deal with the theme of the eventual access to the Eucharist for non-Catholic spouses in mixed marriages."

The Vatican officials participating will include: Ladaria; Koch; Msgr. Markus Graulich, undersecretary of the Pontifical Council for Legislative Texts; and Fr. Hermann Geissler, an official at the doctrinal congregation.

"The Directory for the Application of Principles and Norms on Ecumenism," published in 1993 by the Pontifical Council for Promoting Christian Unity," noted that "in general the Catholic Church permits access to its eucharistic Communion and to the sacraments of penance and anointing of the sick only to those who share its oneness in faith, worship and ecclesial life."

However, it said, the Catholic Church "also recognizes that in certain circumstances, by way of exception, and under certain conditions, access to these sacraments may be permitted, or even commended, for Christians of other churches and ecclesial communities."

The directory encouraged diocesan bishops, "taking into account any norms which may be have been established for this matter by the episcopal conference," to establish "general norms for judging situations of grave and pressing need" and for verifying that the non-Catholic person "manifest Catholic faith in this sacrament and be properly disposed."