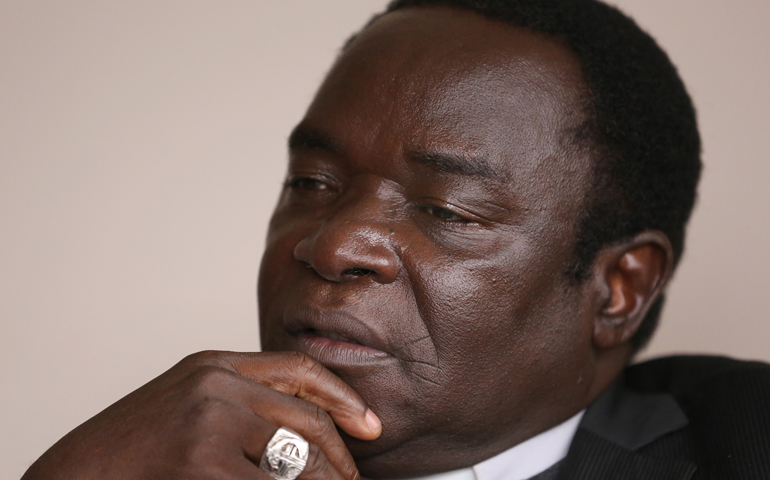 Bishop Matthew Hassan Kukah of Sokoto, Nigeria, visited the United States as a guest of Brooklyn, N.Y.-based Aid to the Church in Need to raise awareness of the plight of Christians in northern Nigeria, and gave talks in Boston, New York and Washington, D.C. While in New York, Bishop Kukah spoke with NCR April 23 by telephone.

NCR: What is the purpose of your trip to the U.S. at this time and what do you hope to accomplish?

Kukah: I'm here at the invitation of Aid to the Church in Need, that collaborates with our dioceses [in Nigeria]. I hope to show the solidarity of the Body of Christ, which gives us hope and consolation, that other people care, and work together.

Will you share some insights into Christian persecution in Nigeria and northern African countries with large populations of Muslims?

Generally, the situation in which Islam sees non-Muslims is the concept is basically the same: Muslims believe their religion is superior and Muslims are superior. How they see the role of Christians in government and society is that the Christian community has limited access to some government services. There have been churches put on fire. This is compounded by the fact that very often the government does absolutely nothing.

In your diocese, and in northern Nigeria, Catholics and Christians are a very small part of the population, how do you try to influence the local and national governments to be responsive in cases of such persecution?

In my diocese for example, we have three secondary schools that are, in the last several years, posted the best results in the state. So to that extent we exercise quite a lot of influence. I think the government also appreciates that. So what we are really doing now is exploring better opportunities, much more effective collaboration, especially after Boko Haram, that we are confronted [with] a problem of not Muslims fighting the Christians, but Muslims have suffered the most. Addressing Boko Haram in Nigeria will require collaboration between the church and the state in a manner that doesn't negatively impact the church. We need free access to places of worship, free access to land to provide services to our members, especially the weakest members of our society. We have a small health facility in Sokoto. And when we were to open the facility, I got the sultan who is the head of the Muslims in Nigeria, with whom I have a very good relationship, to come himself to the opening. So it's possible for Muslims and Christians to collaborate together. They dedicated our new facility. There is a lot we can do together.

Will you talk about the state of the 276 kidnapped school girls kidnapped by Boko Haram who are still held hostage after two years and your understanding of the current situation?

The truth of the matter is that there is much speculation. Now there is uncertainty of whether the girls are still alive. There are some media reports that show the girls are very much alive. It is very difficult for us to say what the government might do. My suspicion is that Boko Haram is going to continue to negotiate until they get what they want. Our hope is that the girls are safe and that they will be returned to their parents safely.

What is the solution to defeating Boko Haram, Al Qaeda and ISIS, especially as they operate in Nigeria and the Lake Chad Basin, to overcome these terrorist groups?

It is difficult to say what it will take to overcome these groups. The fact is that the governments in Africa have to deploy the resources that they have for improving the welfare of everyone. Poverty and violence create the conditions for these groups. The governments have to be much, much more aggressive in providing education. It is also clear to me that so much of the conflict is outside the control of ordinary Nigerians.

There are many examples of Muslims and Christians coexisting and cooperating peacefully. Why is a Christian presence in Muslim countries a positive?

The perception outside of Africa is that conflicts inside Africa are between ethnic groups. The reality is that life is much more complicated. There are so many things that keep Nigerians together. There is [the] whole area of government, where we share power, to make the constitution represent everyone. There are no political parties around religion in Nigeria. There are currently elected leaders who are Christian.

Where do you see hope for Christians in Nigeria, and in Africa in general, to be able to live in peace with Muslims?

I see a lot of hope. Christians believe in hope and hope does not disappoint. For me we have a lot of hope because of our shared humanity and the enthusiasm I see on the faces of our countrymen even in difficulties. We are focused on the area of education and providing for the sick and the weakest of society. We can create an environment where young people are living together, playing together, then we can have the hope for the future.

What is the Catholic church in Nigeria doing to protect discrimination of other minorities such as members of the LGBT community?

Assuring that we appreciate members of this community and that we are all children of one God. We have to make sure people are not discriminated against because of gender, race, orientation or other forms of discrimination. But for me I think the church is doing the best it can and that people do not become stigmatized. In my country, Catholics should never contribute to the stigmatization of any group.

How is Pope Francis' environmental encyclical Laudato Si' received in Nigeria, especially given the rich natural resources of Nigeria and a significant agricultural industry?

I spent several years serving the people who worked on the land. So I have an idea of what the impact of developmental degradation has on the lives of people. Absolutely this encyclical was welcomed and very, very warmly received in Nigeria. What Laudato Si' has done has given us a greater sense of urgency for the need to protect the environment. What we are working on now is to make sure the document is studied by the country's Catholic bishops conference and to help to mobilize both Muslims and Christians to protect the environment.

How will the pope's latest encyclical Amoris Laetitia (The Joy of Love) be received in Nigeria in the weeks and months ahead?

I am very proud of the fact that we in Nigeria was voted some years ago as the happiest nation in the world. To the extent the pope is reinforcing the need for a world that is so troubled that it comes to understand the "joy of love," is very welcomed. We can only welcome the pope's words as words of encouragement. The family is impacted by the surrounding conditions in which it lives. With Boko Haram and other influences, Nigerian families face difficulties.

Your visit to the U.S. is in the midst of the presidential primaries. There is a lot of rhetoric against refugees, immigrants and Muslims. What is your message to the candidates who are trying to become the next president of the United States?

Politics is politics. Rhetoric is deployed by politicians to mobilize supporters and it's different than around realities. What is also quite significant is that the world has changed and there is no part of the world that offers us more hope than the United States of America. It has values, it has been together for decades. The American electorate knows too well that change is here and that immigrants have been welcomed in America and that is what this great country continues to celebrate. I would like to see more Catholics involved in American politics which is why I was a bit disappointed when [Vice President] Joe Biden didn't throw his hat into the ring. I would love to see greater Catholic involvement in American public life.

To read more about Kukah's analysis of the persecution of Christians in Africa, click here for a 2012 talk he gave at a conference at the University of Notre Dame.

[Tom Gallagher is a regular contributor to NCR on domestic and foreign affairs and is the lead writer for the newspaper's Mission Management column.]