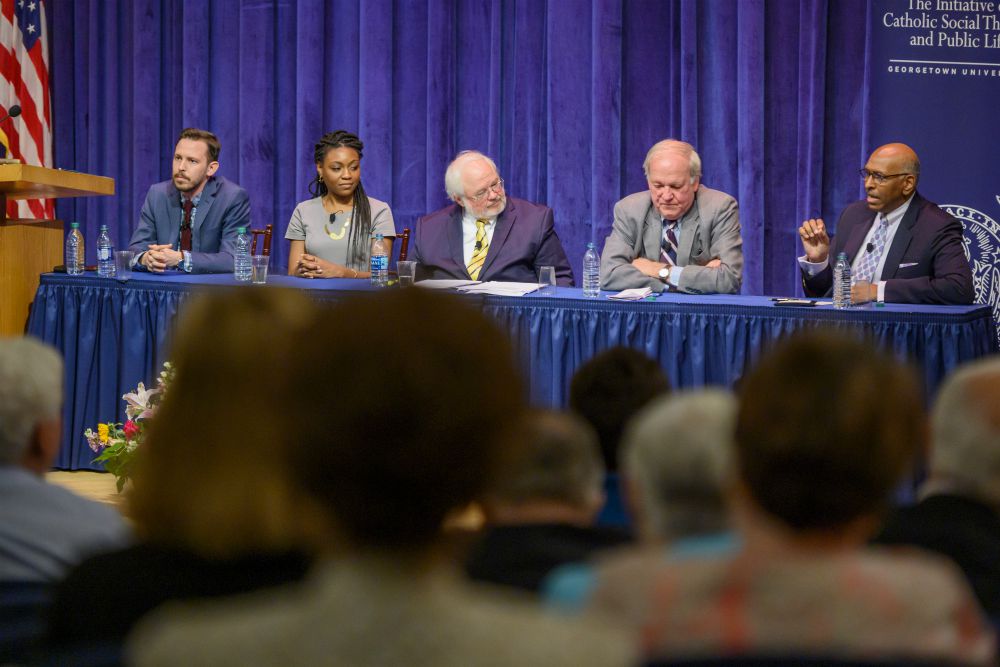 As Democratic presidential candidates seem more willing and eager to discuss their faith in public, Christine Emba, an opinion writer for The Washington Post, said she expects interesting questions to arise about what faith means in American politics.

"I do think that this debate about religion in 2020 reflects a number of macro questions that we will be talking about for years to come," Emba said at a May 22 panel at Georgetown University sponsored by the school's Initiative on Catholic Social Thought and Public Life.

"We're seeing not just the religious right but we're seeing the emergence of, perhaps, a religious left," said Emba.

That emergence complicates previously held narratives that the right had an ownership of faith in American politics. It also raises questions, Emba said, about "what Christianity really means? What the Bible actually says? And what parts of the Gospel are most relevant today?"

Emba said that previously faith could be expected to break down along obvious lines. "To be Christian, it can be implied, is to be on the right," she said.

Emba and fellow panelist Michael Steele, a political analyst for MSNBC and former chairperson of the Republican National Committee, compared the Republican party and President Donald Trump's utilization of faith in politics to a weapon or "bludgeon."

Rather than emphasizing the importance of living your faith in everyday life, Emba said that the right tends to make faith an "either-or" question.

"Being a Christian to many on the right seems to mean you vote 'yes' on being pro-life, you vote against anything that has to do with gay people, and many other" assumed positions that seem to be "more allegiance to a side that seems to represent something more than the actual belief in the theology and thinking and gospels behind them."

However, if a Democratic candidate is willing to push back and engage deeply with faith issues — such as considering "what does 'pro-life' actually mean" — they can provide voters a "way out of this binary." Emba said that would allow voters to think, " 'Which candidate actually is explaining their values, their policy positions, in a way that actually aligns with my faith?' "

"Democrats starting to talk more about their faith is not just a reclaiming of religious discourse by Democrats from Republicans in a political sphere," said Jack Jenkins, a religion and politics reporter for Religion News Service.

Jenkins said that a long-standing Democratic approach had been to use faith as a persuasion technique to appeal to African American churchgoers and conservative leaning voters, yet that doesn't appear to be the case in this election.

"It seems like it's more geared toward the base of the Democratic party," he said.

Jenkins said that religious activist leaders like the Rev. William Barber and Linda Sarsour are being talked about by many different candidates as people with which they want to spend time or be photographed.

"That's a relatively new shift because that means they're making a direct appeal to progressive base voters who are inspired by these religious leaders, not necessarily using faith as a way to just catch and to attach themselves to potential conservative leaning voters," Jenkins said.

"One of the things that's really interesting about these candidates," he said is that "a lot of the language that they're using has been years in the making and comes out of these progressive faith circles that — some predate this election by decades — came out of the last four or five years," Jenkins said.

"Democrats starting to talk more about their faith is not just a reclaiming of religious discourse by Democrats from Republicans in a political sphere."

Mike McCurry, former press secretary to President Bill Clinton and a professor at Wesley Theological Seminary, said he gains hope, given the way South Bend, Indiana, Mayor Pete Buttigieg talks about his faith in a refreshing way, that Democrats will be more willing to engage publicly with faith. He discussed how the past three Democratic nominees — John Kerry, Barack Obama, and Hillary Clinton — all struggled to effectively discuss their faith on the campaign trail.

"There is, in our national politics, a 'God gap,' " McCurry said. "Democrats have a hard time talking about religious expression."

"One of the things that's divided people … is that when candidates say they are religious, in many minds that automatically aligns them with the right, with this dogmatism," said Emba. "Hopefully in the 2020 election we'll see a lot more flexibility on this. Voters won't necessarily assume that candidates who hold a faith will use that faith to tie them down or to force them to ally with perspectives that they don't believe in."

"Faith doesn't have to be a handicap for Democrats and it will no longer be a net that Republicans can use to get voters," Emba said.

A version of this story appeared in the June 14-27, 2019 print issue under the headline: Panelists at Georgetown event discuss faith and politics in 2020 election.