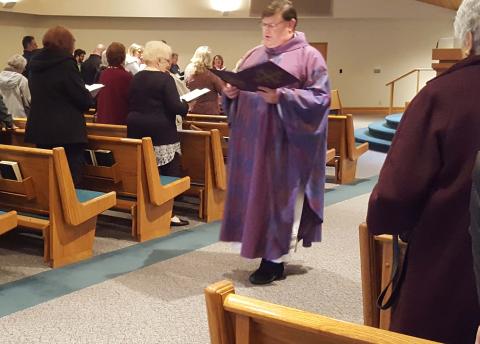 Saying he could “no longer live in the shadow of secrecy," Fr. Greg Greiten told Mass-goers at St. Bernadette Parish, where he is pastor, that he is gay during Masses this weekend in Milwaukee.

Fr. Greg Greiten was halfway through his homily, during which he shared that he is a gay, celibate priest, when a woman rose from her pew and shouted, "God bless you, Father!" The rest of the congregation at St. Bernadette Parish, where Greiten is pastor, responded with applause.

More applause and a standing ovation came when Greiten finished explaining that he was going to "no longer live in the shadow of secrecy" during the 10:30 a.m. Mass Sunday, Dec. 17.

After Mass, over coffee and doughnuts, parishioners responded positively or with nonchalance.

"I could care less," said Madge Powell, a parishioner for eight years. "I love him for the person he is."

Related: Parish priest breaks the silence, shares that he is gay

Choir member Luci Crosland and others were impressed with Greiten's bravery, especially since they suspect not every parishioner will be supportive.

Shawn Govern doesn't support gay marriage, but was impressed by his pastor's honesty. "He made a choice to walk in Christ's shoes, because he's not going to be accepted by everyone," said Govern, adding that St. Bernadette's is "not a liberal bastion."

"He's such a kind and caring person," Thorn said.  That her parish priest is gay "doesn't matter," she said.

Greiten's experience is not unusual. In fact, most gay priests who tell others about their sexual orientation say they are happier and healthier since "coming out." And their parishioners, fellow priests and even superiors usually respond positively to the news.

"All of the priests I've met who have come out have told me that their parishioners or the people they minister to have had no problem with learning their sexual orientation," said Francis DeBernardo, who has worked with LGBT Catholics for 22 years as part of New Ways Ministry and is currently its executive director.

Although accurate numbers about out gay priests — or gay priests at all — are hard to come by, DeBernardo said most are supported by their bishops or religious superiors. It's likely, however, that priests who sense their bishop or superior would react negatively may be choosing not to come out to him and risk retribution.

Franciscan Fr. Ralph Parthie, who was ordained in 1975, considers himself lucky since early on in his priesthood, a "very enlightened" provincial suggested the friars have an open conversation about homosexuality to better understand one another and live their vocations.

He came out slowly, first to close friends and family, but has been open about his sexual orientation for a couple of decades, especially as he became involved in LGBT ministry and service those with HIV/AIDS.

"I wasn't afraid, because my province was really so healthy about it," said Parthie, who is director of friar life and secretary for formation for the Franciscan Province of the Sacred Heart, based in St. Louis.

The first person Fr. Frederick Daley, now 70 and pastor of All Saints Parish in Syracuse, New York, told about his sexual orientation was his spiritual director, a common experience with gay priests. Daley expected condemnation, but instead received the "tremendous grace" of understanding and compassion.

He was inspired to come out more publicly in the wake of the clergy sexual abuse crisis in the church, when he felt gay priests were being unfairly scapegoated. After meeting with his auxiliary bishop, Daley shared that he was gay with a local newspaper reporter who interviewed him about an award he had won.

'I realized one of my greatest gifts to those who are marginalized and struggling is to share my own struggle.' --Fr. Frederick Daley

After the next day's headline — "Father Daley declares he's gay" — his parish gave him a standing ovation. He received no negative reaction, except for a few letters to the editor from national news coverage.

"I think the Catholic community is far ahead of its leadership on this issue," he said.

Coming out is not easy, but staying "closeted," isn't easy or healthy, said Loretto Sr. Jeannine Gramick, a co-founder of New Ways Ministry. It "doesn't enable them to be the full human beings that God intended them to be." That is "so debilitating ... for their ministry and their relationships in general."

Parthie said, "Secrets kill. When you have to keep parts of yourself secret because you're afraid people won't love or respect you, that's not healthy."

Before Daley was ordained in 1974, he repressed any thoughts, feelings or discussion of sexuality. After ordination, he found that though he loved being a priest, he felt unusually sad. Ultimately, he said, he realized it was because he hadn't acknowledged, even to himself, that he was gay.

"The fear and depression around coming to that conclusion was very agonizing," remembered Daley. "Slowly, but surely, I was able to accept who I was and ultimately rejoice in who I was."

"I loved being a priest and was committed to the priesthood," he said, "So I chose to continue in ministry and continue living a celibate life."

His explicit mention of celibacy is necessary, because some people equate homosexuality with sexual activity. "It's unfortunate but necessary for priests who do come out to have to add that qualification," noted DeBernardo.

Daley did get some pushback in 2006 when he was being considered for a position with Catholic Relief Services in Africa, when the job offer was rescinded over what he believed was his sexual orientation. CRS told ABC News it was Daley's activism, not his orientation that would have been problematic in Africa.

Parthie has never had any negative reaction, although he is sure that some fellow priests are not comfortable with his being out. "But it's never really been an issue," he said, including when requesting priestly faculties when working in a diocese. 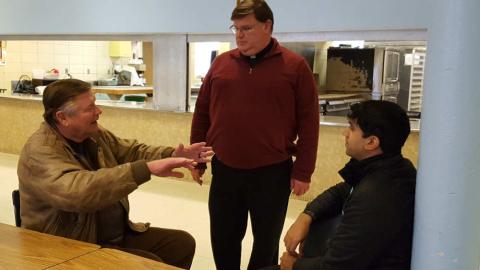 That does not mean, however, the fear of coming out is not real. For example, in 2015, Fr. Warren Hall was fired from his job as chaplain at Seton Hall University and later barred from ministry by then-Archbishop John Myers of Newark, although the punishment ostensibly was for Hall supporting gay advocacy groups, not for being gay himself.

Fear of negative consequences comes from the very top of the Catholic hierarchy. Just a year ago, the Congregation for Clergy updated the norms and guidelines for men studying for the priesthood. The updated norms draw heavily from guidelines issued in 1992 under Pope John Paul II and 2005 under Pope Benedict XVI, which advise against admitting "to the seminary or to holy orders those who practice homosexuality, present deep-seated homosexual tendencies or support the so-called 'gay culture.' "

Daley worries that the current polarized climate in the church is not helpful for LGBT people. But his biggest concern is formation of new priests and the repressive attitude at some seminaries.

"That's a very unhealthy atmosphere for a person to grow in pycho-sexual development," he said, noting that many of his fellow priests reacted to his coming out with silence.

But Parthie believes "God doesn't care if a person is gay or straight," he said. "It's what you do with that that's most important."

At 71, he knows who he is and who God calls him to be. "I'm not worried about people who can't see beyond their own fears and prejudices," he said.

For Daley, being out has been a gift to his ministry. "I realized one of my greatest gifts to those who are marginalized and struggling is to share my own struggle," he said. "I have no regrets at all."

Drew Prusko, who attended Mass at St. Bernadette with his husband and heard the homily in which Greiten came out, was inspired by the priest's words. "I grew up Catholic, but I haven't stepped foot in a Catholic Church in a long time," he said. "If I had known a priest that shared what he did today, maybe my spiritual development would have been different."

A version of this story appeared in the Dec 29, 2017-Jan 11, 2018 print issue under the headline: Parishioners support pastor who reveals he is gay.