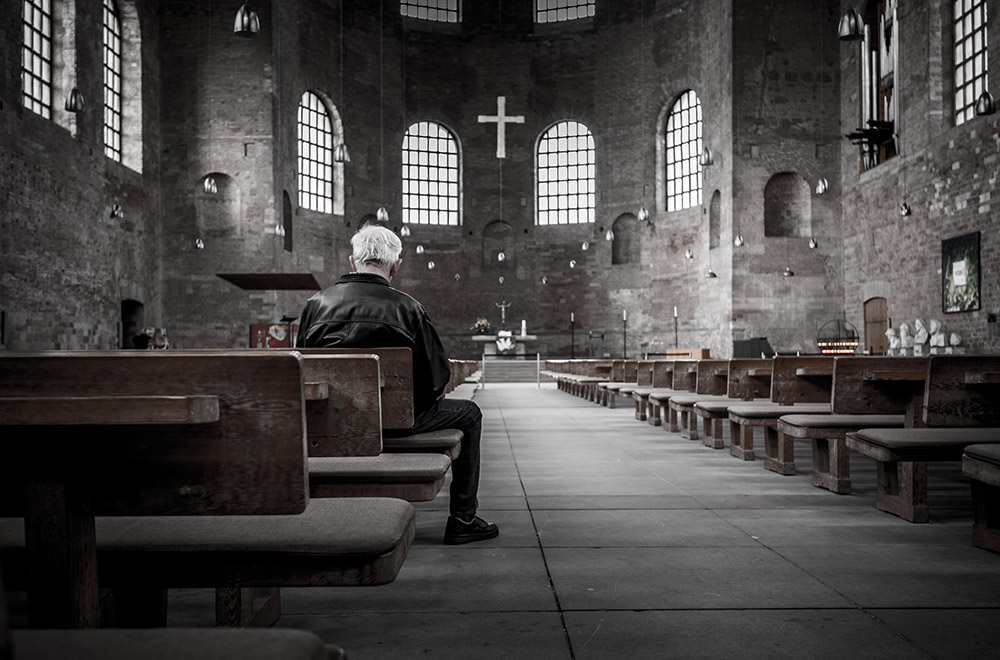 One of the more memorable public lectures I attended was offered by the then-dean of the faculty of spirituality at Rome's Pontifical Gregorian University. He admitted before the crowd that after decades of spiritual direction with countless priests and religious he'd come to the conclusion that their overriding problem is that "they don't know who they are."

But we would be mistaken to think of this as a "church issue" only. Aristotle wrote in The Nicomachean Ethics that "people seem to seek honor in order to convince themselves of their own goodness." This need for external validation taps into a perennial human tendency and goes under dozens of terms and gradations of need: respect, deference, popularity, prestige, fame and the clandestinely solicitous "Have you heard of me?" It's found in motorcycle clubs and football teams, academic societies and the music industry, prisons and religious hierarchies. The face of the currency changes, the lingo is different, but the underlying dynamic is identical. It's the clearest exposé of the ego's mechanisms driving people toward an identity. In the vacuum of self-knowledge external displays aimed at garnering self-worth are inevitable.

This, I believe gets close to the root but isn't synonymous with what Pope Francis has widely identified as the problem of clericalism, which he describes as a "culture of death" — this last phrase is shocking given its deployment by some Catholics to categorically denounce the world's evils.

A culture is a network of personal meaning and valuing. Clerical culture hinges on leaders attracting similarly disposed persons through the laws of social attraction, evoked in different ways since Plato as the principle of "like seeks after like." The psychology engenders webs of kinship among priests, bishops and similarly disposed lay groups, bishops and cardinals, wealthy lay Catholics and think tanks. They always find each other through family resemblance, whatever that happens to be.

Recognition based on merit and social capital is one thing; a personal worth indistinguishable from public image is another. Not just clergy but anyone, including those of us who earn our bread and butter in the academy, can be no less smitten by our systems' portrait galleries and the protocoled rituals of maneuvering for and keeping honor.

One way to enhance my self-worth is to occupy an office or have a title which says, "I am the image that you see." That image needs care, protection and strategic promotion, like a politician on the campaign trail, or a theater actor whose self-worth rises and falls with the chatter about his latest performance. Moral compromises happen when the religious system ratifies my identity. At worst I become a recognition junkie, insatiably restless, flitting away the qualities that make me unique for the temporary haven of external validation. Jesus was less poetic: "Why do you look to one another for approval and not the approval of the one God" (John 5:44)? This is the peace that the world gives … and takes back.

Hierarchical culture is the gold carrot for those predisposed to its allurements. In its crassest forms it not only seems unbreakable but comes with a breathtaking lack of shame over its paraded grotesqueries of entitlement, aristocratic airs, and blind ambition. Ultimately, it's a choice to be a certain kind of human being, for in that mysterious precinct of personal freedom one continues to prefer lesser values such as reputation to higher ones like dignity. One's status in the system is perceived as tantamount to being a servant after God's heart.

The psychology makes people incapable of rousing themselves from the false values propping up the illusory self-image; an inner Rubicon is crossed where it lacks the quality of temptation, as something I ought to wrestle with. After several decades too much of the self has been invested in a specific way of being human. God will not interfere.

The truth is that you can't be both the religious system's poster boy and a man of God.

In a perverse elevation of self, the clerical minister hides behind the simulated humility of servanthood in what must be one of the wackiest inversions of the Gospel. He forfeits the depth of inquiry that reaches for the humanizing meaning of doctrine and morality, its inner vitality and burning relevance, by presuming that the invocation of authority — "The church teaches such and such …" — can be affixed to any plank in its teaching as if people will submit themselves to it, heart, mind and soul. This too is an external hook; suasion by presumed deference.

In Francis' thought-structure, his denouncement of clericalism is frequently followed by the valuing and accompaniment with the poor, who, by the way, serve no purpose for clerical ministers than being part of their public relations strategy. They have nothing he wants.

It's fellowship with those outside our networks of influence that relativizes our system's currencies of honor. Drug addicts and lonely senior citizens care not a whit about my latest published article or which committees I sit on. The deference I'm accustomed to isn't forthcoming, and when I fish for recognition, they don't take the bait. This is a kenosis that strips my ego of its crutches and illusions. Church identity politics and their version of "the Game of Thrones" become obvious in their pettiness and parochialism. In that disorienting wilderness there's now a space for God to speak a new self into existence.

As Trappist Fr. Thomas Merton once wrote, "People may spend their whole lives climbing the ladder of success only to find, once they reach the top, that the ladder is leaning against the wrong wall." The tragedy with clericalism is no less than the corporate lawyer or business mogul who has gained the whole world but has lost their soul; in other words, they have lost who they were destined to become.

The manifestation of God to Jesus at his baptism points to the pattern intended by God for all of us. As with Jesus, God lavishes the exquisitely personal content to our generic notions of dignity, presaged by the life-generating word, "You are …" If we want it, the Living God can give our dignity its volume and mass, freeing us — slowly and painstakingly as is characteristic of the death of a spurious identity — from the "worldly honors" of the Janus-faced materialism of the church's honor systems. It crucifies our self-made doppelgangers that live for what ingratiates us with recognition systems and puts a stop to the moral compromises that inevitably come of needing to fit in at all costs.

The laws of the land are now addressing what the Gospel couldn't, and to be sure, clericalism wouldn't be getting the scrutiny it badly deserves if not for the cover-up crisis. But humiliation doesn't produce conversion. Public shaming won't make us disciples. Obeying the law can't transform the infantile superego into a strong conscience. We now know that it's catastrophic when the shepherd uses his sheep and pasture to tell him who he is. Clericalism can't be licked until it gets to this beachhead.

[Mark Slatter is a priest with the archdiocese of Ottawa, Canada, and associate professor of theological ethics at Saint Paul University, Ottawa.]

A version of this story appeared in the March 22-April 4, 2019 print issue under the headline: Flock and pasture can't tell shepherd who he is.