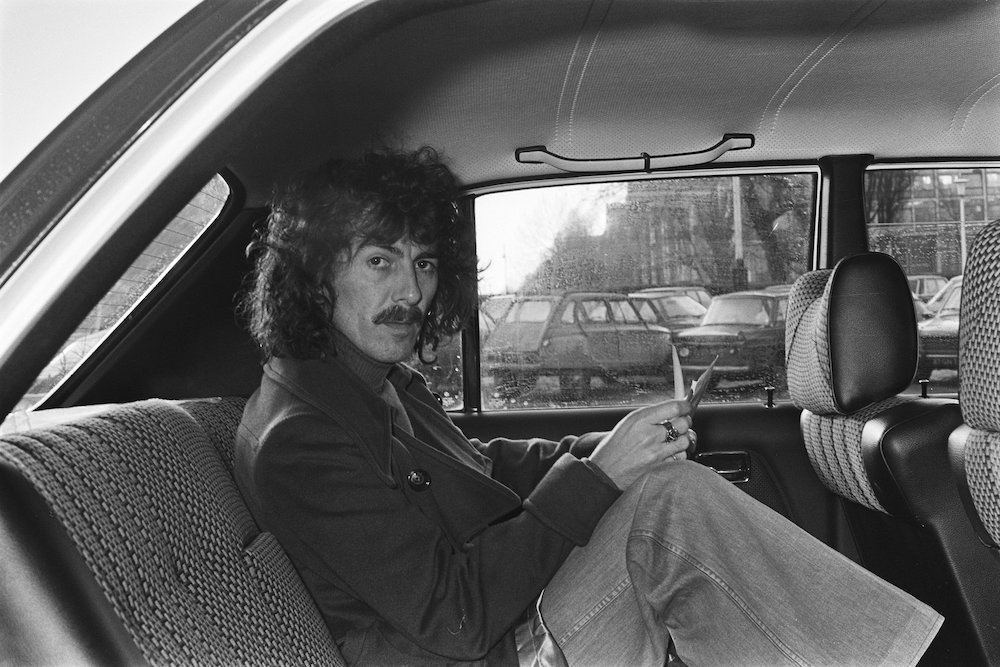 George Harrison is pictured in the back seat of a car as he leaves the Hilton hotel in Amsterdam, the Netherlands, Feb 4, 1977. (National Archives, Anefo collection/Suyk, Koen)

If you happened to be inside a hospital early in the pandemic, you might have heard these words floating through the corridors — "The smiles returning to the faces. Little darling, it seems like years since it's been here." They're lyrics from "Here Comes the Sun," George Harrison's 1969 classic about the resurrection from the dead of winter. Across the country, hospitals played The Beatles' song over paging systems as a celebratory ritual when discharging a patient on the mend from the coronavirus. Many still do.

Music has been therapeutic for people outside hospitals, too, and more than a few of the prescribed tunes were written and sung by the "quiet Beatle," also known as the spiritual one. Harrison, who died of lung cancer in 2001 (he would have been 78 last month), continues to pop up on pandemic playlists during a dark winter that indeed "seems like years." Among his most turned-to works are not only "Here Comes the Sun" but also other creations, including multiple tracks from his signature solo album, "All Things Must Pass." 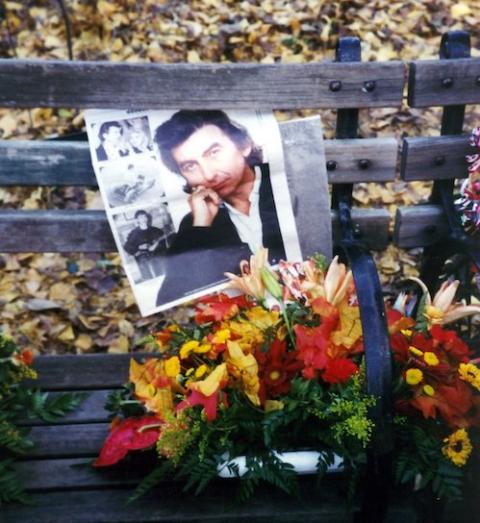 A makeshift memorial to George Harrison is pictured on a bench in the Strawberry Fields section of New York City's Central Park, Nov. 30, 2001, the day after his death. (Flickr/Wally Gobetz)

The title track of that 50-year-old album begins to explain why the Harrison revival isn't just about one song. "All Things Must Pass" was inspired by a foundational Taoist text that speaks to the ephemeral quality of nature and life, a message that Harrison edges toward hope ("Sunrise doesn't last all morning / A cloudburst doesn't last all day"). Brian May, the guitarist in Queen, spun it this way on Instagram last year: "All Things Must Pass. ALL. The #Earth. The #coronavirus. The #humanrace. George Harrison - here after the Beatles had passed - says it all. Bri."

The more you explore Harrison's music, the more you find an artist who speaks to a time when so many are grasping for meaning and a glimmer of transcendence.

Born and raised Catholic in Liverpool, England, the ex-Beatle searched and struggled throughout his abbreviated life. The anguish, as well as the joy, is intermixed in his work. Harrison the seeker is off and running in "My Sweet Lord," the lead single on "All Things Must Pass." The song topped global charts in late 1970 and early 1971. It's a gorgeous blend of sounds, mingling pop-rock (notably Harrison's evocative slide-guitar licks) with Black gospel music and Hindu chant. The lyrics also fuse traditions: Backup singers belt out "hallelujah" (from Judeo-Christian scriptures), then drift seamlessly into "Hare Krishna … Hare Hare … Hare Rama" (from a Sanskrit mantra). Harrison later explained that hallelujah and Hare Krishna amount to "quite the same thing" as words of praise for the divine in his mind. 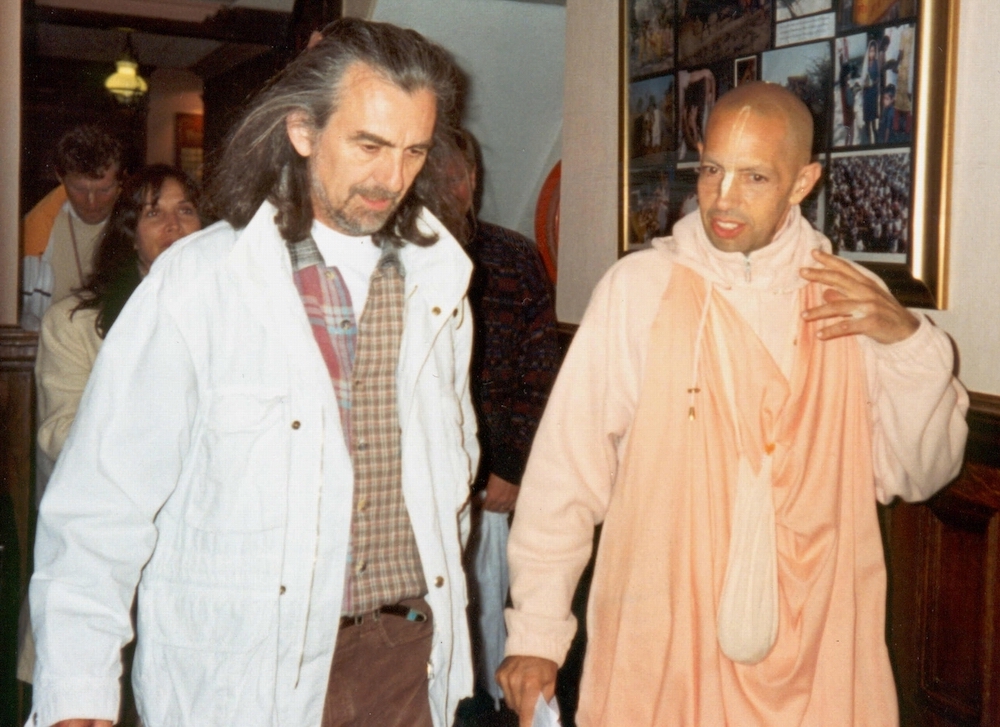 George Harrison, left, talks with Mukunda Goswami, a spiritual leader in the International Society for Krishna Consciousness, in the corridors of the Bhaktivedanta Manor in Aldenham, Hertfordshire, England, in June 1996 (Wikimedia Commons/Richard J. Cole, aka Radha Mohan Das)

More broadly, the alternating chants in "My Sweet Lord" reflect both his Christian upbringing, which he clung to, and his turn toward Eastern spirituality. In a 1992 interview reprinted in the new collection, George Harrison on George Harrison (Chicago Review Press), Harrison stated that India "turned me back on to Christ." He didn't elaborate, but his friend, Deepak Chopra, has pointed out that Harrison was an avid reader of books about the historical Jesus and Hindu traditions. "He had a very personal relationship with Christ," Chopra recalled, noting that alongside his signature on letters, Harrison would also mark out an Eastern symbol and the Cross.

In another song on "All Things Must Pass," Harrison returns to the gospel-rock style and confesses his moral and spiritual backsliding. "Forgive me lord / Please, those years when I ignored you," he petitions in "Hear Me Lord." In all, a couple of dozen songs grace the original triple album. Many of these resonate now as much as ever, among them Harrison's melodically complex ballad, "Beware of Darkness" ("The hopelessness around you / In the dead of night"), and his loving lament for the human condition, "Isn't it a Pity?" In late November, Harrison's family issued a 50th-anniversary remix of the song "All Things Must Pass," prompting Rolling Stone to opine that the lyrics ("It's not always going to be this gray") seemed "unexpectedly fitting" with the change of guard in Washington, D.C.

If there's one other Harrison album well-timed for pandemic playlists, it would likely be his last one, "Brainwashed," released posthumously (and co-produced beautifully with his son, Dhani, and ELO's Jeff Lynne). It points the way to both spiritual and political resilience.

The title track is a bracing alarm over official lies. Harrison pleads with God to deliver us from leaders who've tried to wash the truth from our brains; and, because it's just a song, there's some Beatles-esque whimsy — "They even got my grandma / When she was working for the mob." Perhaps most striking is the G-word recited 49 times in the song: "God, God, God / You are the wisdom that we seek … God, God, God / The lover that we miss." On that album, there's also the mesmerizing "Any Road," which bids us hang tough and keep moving on ("If you don't know where you're going / Any road will get you there"). 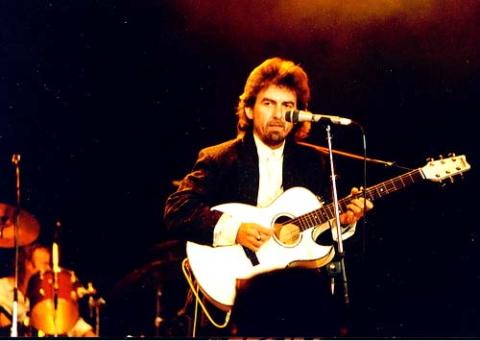 Other tracks include the rollicking "P2 Vatican Blues (Last Saturday Night)," from which we may deduce that Harrison was never quite able to get the Catholic imagery out of his head. The opening verse finds him in the Sistine Chapel, gazing at the frescoes — which "filled my heart with delight." From there, the song takes a spoofy turn as Harrison climbs warily up St. Peter's Dome, "claustrophobic and ex-Catholic." Altogether, the 2002 album spreads out a luscious array of settings and moods for any era. "Brainwashed" might be the all-around George Harrison — the playful George, the prophetic George, the George who rocks.

As all things must do, George Harrison passed, at age 58, still looking for answers but also finding solace in the search.