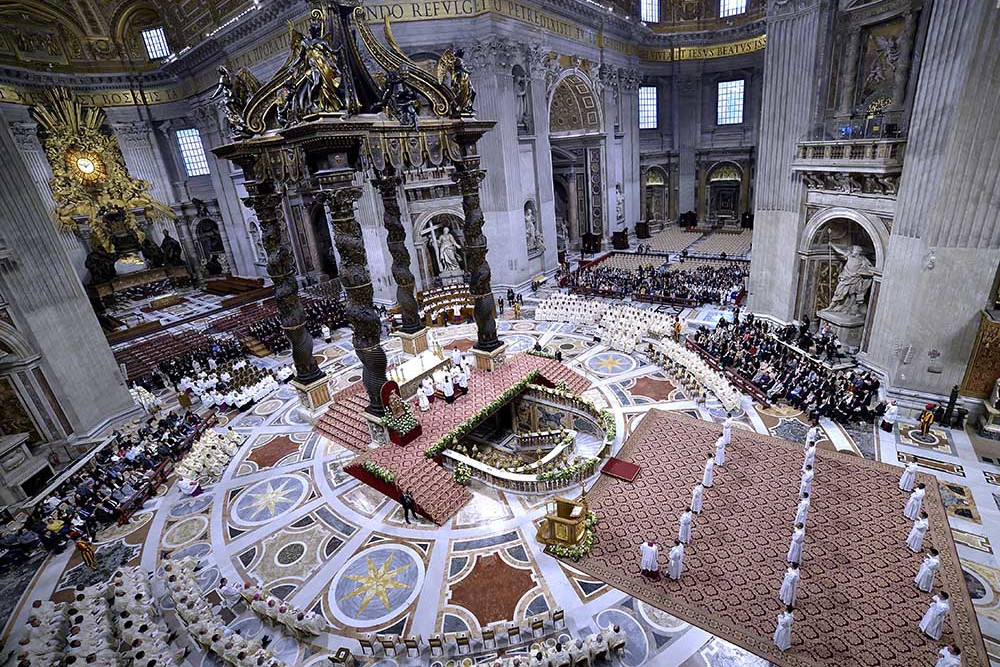 Pope Francis celebrates an ordination Mass for 19 new priests in St. Peter's Basilica at the Vatican May 12, 2019. (CNS/Stefano Spaziani, pool)

The Vatican's report on defrocked Cardinal Theodore McCarrick revealed sexual abuse of adults and minors by a Catholic cleric and its cover-up by church officials — more of the same pattern we've seen so often in the church, reaching to the highest levels.

How should church leadership respond? It's easy to see this as a lack of effective rules to root out bad actors. I want to suggest that instead of a legal or juridical approach to this ongoing problem, we instead take a medical metaphor for our lead. What's going on in the organism of the church?

Diagnosis starts with a thorough exam. Here our symptoms start with sexual abuse of boys and men, à la McCarrick.

But it's not just sex: Bishop Michael Bransfield lived a lavish, jet-setting lifestyle while shepherding — fleecing — his Diocese of Wheeling-Charleston, West Virginia. He also showered cash gifts on other church leaders, including thousands to adults he allegedly harassed. As Fr. Peter Daly commented, bishops are the "spiritual heirs of the Borgias and the Medici."

Diagnosis is discerning in the pattern of symptoms a root cause or causes that, if addressed, will alleviate the symptoms. If the symptoms are treated but not the disease, these symptoms will come back, and like imperfectly exorcised demons, will bring seven times more problems with them. There may be other problems — comorbidities — that need treatment as well; ignoring them means the patient will still suffer.

What's the disease? Clericalism, sure, but other denominations have clericalism but don't seem to have the problem of recurrent and widespread abuses of power. Rather, unchecked clericalism is at the root of the Catholic Church's affliction. A tight-knit clerical culture defends itself, first by defining priests as uniquely Christ-like — different and better than the unanointed laity.

When a cleric misbehaves, it is in the interest of all to cover that up so that the magical elevation of church leadership is not called into question. As Lord Acton observed, speaking of the papacy: "Power tends to corrupt and absolute power corrupts absolutely. ... There is no worse heresy than that the office sanctifies the holder of it."

The U.S. bishops' 2002 "Charter for the Protection of Children and Young People" was an attempt to treat the symptom of sexual abuse by priests, not the underlying disease. It was crafted in the wake of the sexual abuse crisis in Boston, and did not prescribe penalties for bishops.

A number of the bishops who voted for the charter have wound up facing accusations of abuse or of protecting abusers, leaving one wondering whether the exemption of bishops from penalties was self-serving.

Two other comorbidities contribute. One is mandatory celibacy. Note that celibacy does not cause sexual abuse just as it doesn't cause financial abuse. Mandatory celibacy creates a seller's market for seminarians: As the number of men willing to promise celibacy declines, church leaders are pressured to ordain people who are less capable of servant leadership, and leaders may be more inclined to look the other way when priests are found to be failing at celibacy or are fleecing the faithful.

If you think that bishops' willingness to look the other way stops when a priest does something egregiously evil, you'd be wrong — we learned from Boston that even rape of children was not a bar to continued ministry in the church.

Functional misogyny, inherent in women's unjust exclusion from ordinary authority in the church, is another comorbidity. First, it contributes to the seller's market in seminarians: Lay ministers in the church are disproportionately women, many of them called to priestly ministry but barred on flimsy theological pretexts.

Limiting those who can be clerics by sex fosters a toxic atmosphere of boys-club specialness, as when seminarians are educated in strict separation from the lay ministers with whom they will eventually have to work.

If ordination were open to all, male and female, celibate and non-celibate, there would be less room for unchecked clericalism. I've heard jokes about other denominations where in some places there are "more clergy than laity." Where that is so, clericalism becomes a silly affectation, not a license for abuse — a bad actor can too easily be replaced.

As for treatment options, here's the problem: While many observers have identified clericalism as part of the problem in the church, that same clericalism is preventing meaningful reform. Like the story goes: "How many therapists does it take to change a light bulb? Only one, but the light bulb has to want to change."

There is little appetite for serious reform of clericalism in the church, in part because it would require clerics to voluntarily limit their own power. For those in power, the clericalist system is "working as designed."

One practical constraint on clerical misdeeds would be mandatory, authoritative lay oversight at every level, along with appropriate transparency regarding personnel and financial matters. Without assiduous investigations by The Boston Globe and the Philadelphia grand jury, it might still be thought that sexual abuse cases are isolated instances of priests behaving badly, not a systematic cover-up that enabled more abuse by ever more abusers.

The yearslong failure to investigate McCarrick reveals a hierarchy more willing to tolerate abuse by clerics than to address clericalism, like an alcoholic who loves drink more than life.

Francis has complained about clericalism, calling it "a perversion of the Church," but his criticism rings hollow when he admits only cardinals to his closest group of consultants.

Concerning sexual abuse specifically, Francis created a Pontifical Commission for the Protection of Minors in 2015, but its role is purely advisory. And the last known abuse survivor on the original commission, Marie Collins, quit in 2017. She told NCR at the time that she was frustrated with Vatican officials' slowness to implement their recommendations, calling it "a reflection of how this whole abuse crisis in the church has been handled: with fine words in public and contrary actions behind closed doors."

Francis could require meaningful lay voice and vote in church matters if he chose to. Why shouldn't laypeople have a vote in choosing their priests and their bishops, for example?

Another contributor to our patient's illness is clerical hegemony over the sacraments. When ordination is defined in canon law as conferring sacra potestas ("sacred power") on its recipients, we see the disease at work.

Clericalism starts early in priestly life. Rooting out clericalism would need to start in seminary formation, with a collaborative and collegial formation of ordinands and lay ministers, with a revised theology of orders that doesn't arrogate "ontological change." Titles that reek of unearned authority like "Father" must be discarded in favor of the humbler "Reverend" or "Pastor."

The comorbidities must be addressed too: Mandatory celibacy and limiting the priesthood to men must end. When the number of candidates is expanded, those called to priestly service can be picked out of those just looking for easy access to children, unsupervised control of money, or power without accountability.

Will it happen? We'll know Catholic Church leadership is serious about unchecked clericalism the minute they start addressing questions about the role of clerics in the church, and addressing the comorbidities that exacerbate the main disease. Until then, they'll just be treating symptoms.

[Lisa Fullam is a professor of moral theology at the Jesuit School of Theology of Santa Clara University in California.]