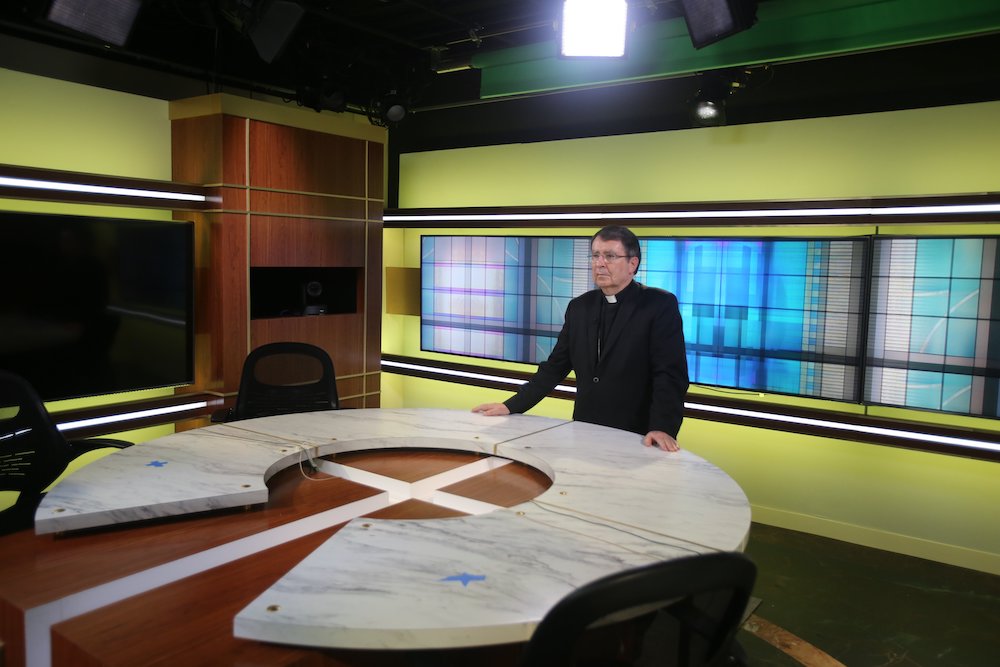 Archbishop Christophe Pierre, apostolic nuncio to the United States, records his address Nov. 12 to be delivered to the U.S. Conference of Catholic Bishops' fall meeting Nov. 16, the first day of the two-day virtual meeting. The address was recorded in the studio at the conference's headquarters in Washington. (CNS/Bob Roller)

As the U.S. bishops gathered last month for their first-ever virtual meeting, there was one thing that wasn't all that different: Several prelates pulled out the tired trope of blaming the media for all that's wrong with the church and the world.

During the church leaders' brief, public discussion about the McCarrick report — concerning the former cardinal's rise in the hierarchy despite a history of sexual assault — there was plenty of talk about sins (McCarrick's) and fasting and prayer as reparations (the bishops').

But Bishop Thomas Paprocki of Springfield, Illinois, got right to what he saw as the crux of the matter with a defense of the person upon whom the report places most of the blame: Pope John Paul II.

"What I think is unfortunate, though, is the media reports that have come out that have tried to paint St. John Paul II as somehow culpable for all this," Paprocki said.

The Vatican report details how the late pope and now saint, despite warnings from advisers on both sides of the Atlantic, approved then-Archbishop Theodore McCarrick's move to Washington D.C., and then later made him a cardinal.

But Paprocki cited footnotes in the report that, in his mind, absolved his hero of having turned a blind eye to the fact that McCarrick shared a bed with seminarians — noting that his evidence was "contrary to the allegations in the media."

Paprocki suggested that the media "understandably perhaps" missed those footnotes because they read only the executive summary, rather than the full 400-plus-page report.

For the record: Although Vatican correspondent Joshua McElwee's initial reporting for NCR drew only on the executive summary, provided to media an hour before the report's wider release, McElwee's second-day story, which detailed John Paul II's complicity, was based on careful reading of the entire report.

Bishop Michael Pfeifer, emeritus of San Angelo, Texas, also expressed concern that "our lay people … pick up more from the secular media than from the church." He urged fellow bishops to issue a statement from the meeting, "humbly admitting mistakes were made," but the conference's president, Los Angeles Archbishop José Gomez, did not take him up on that idea.

Also taking a swipe at the media was the apostolic nuncio, Archbishop Christophe Pierre, who included the "press" as among those contributing to a "genuine crisis of authority" in his address to the conference.

"There is a lack of authority on the part of those who pretend to exercise power; a lack of trust and belief in those who are supposed to have authority, namely those in leadership; and manipulation by the press, which, at times, cares little for the truth but which erodes the confidence and trust of the people in the authority of the press," Pierre said. "No one seems to be offering real values or solutions to bring about healing. These factors have created the crisis in both society and the church."

It's true that there are so-called media outlets masquerading as legitimate news organizations in the church (I'm talking to you, LifeSiteNews), but these general indictments of "the media" by bishops sadly echo a certain soon-to-be-ex-president, who specialized in yelling "Fake news!" whenever the news was bad.

The bishops, collectively at least, also have a history of blaming the media, most notably when journalists uncovered sexual abuse of children and the related coverup by bishops. At the time, the prelates hurled accusations of anti-Catholicism at reporters who were actually doing the church a favor by exposing its weaknesses.

Today, most bishops know to avoid such blatant deflection, and they publicly call for "accountability" and "transparency." Some bishops at the November virtual meeting called for more sunshine, rather than less.

Bishop William Wack of the Diocese of Pensacola-Tallahassee, Florida, noted that he is "amazed at the autonomy we have … that we are really beholden to no one."

While Wack called for fraternal correction among brother bishops, the media, too, can play a role in holding leadership accountable and providing transparency. It's why the media is historically referred to as the "fourth estate" for its role in keeping government accountable. Catholic media, especially independent sources like NCR, have long played a similar role in keeping the church accountable.

For example, it was NCR and other secular media that first alerted everyday church-goers to sexual predators in the priesthood — when the leadership was more interested in quashing that information. Media stories have uncovered the coverup of sexual abuse, shed light on financial improprieties and exposed hidden money in church organizations.

But too often church leaders think the media — perhaps especially Catholic media — should be acting as public relations promoters for the church. Several bishops at the November meeting expressed a desire to "make sure people know about" the positive moves by church leadership to address sex abuse, as Newark, New Jersey, Cardinal Joseph Tobin put it. Chicago Cardinal Blase Cupich also hoped that "word will get out there that we are on the side of the victims."

Yes, media outlets need to tell the whole truth, the good news as well as the bad. But as professional journalists, we also have to respect news values in our coverage, and often that involves some sort of conflict. As I used to tell my journalism students that everyone getting along is nice, but it's not news.

In his comments calling for transparency, Bishop Shawn McKnight of Jefferson City, Missouri, may have inadvertently promoted the work of journalists.

"We as a church need to use all the resources that are available to us, and in many instances that will be found in lay people, who are skilled and qualified in investigating these kinds of accusations and helping us evaluate the facts," he said.

Exactly. The media are not the enemy. We are professionals, trying to do our jobs, in the service of the truth.

This story appears in the The McCarrick report feature series. View the full series.
A version of this story appeared in the Dec 11-24, 2020 print issue under the headline: The media is not the church's enemy.