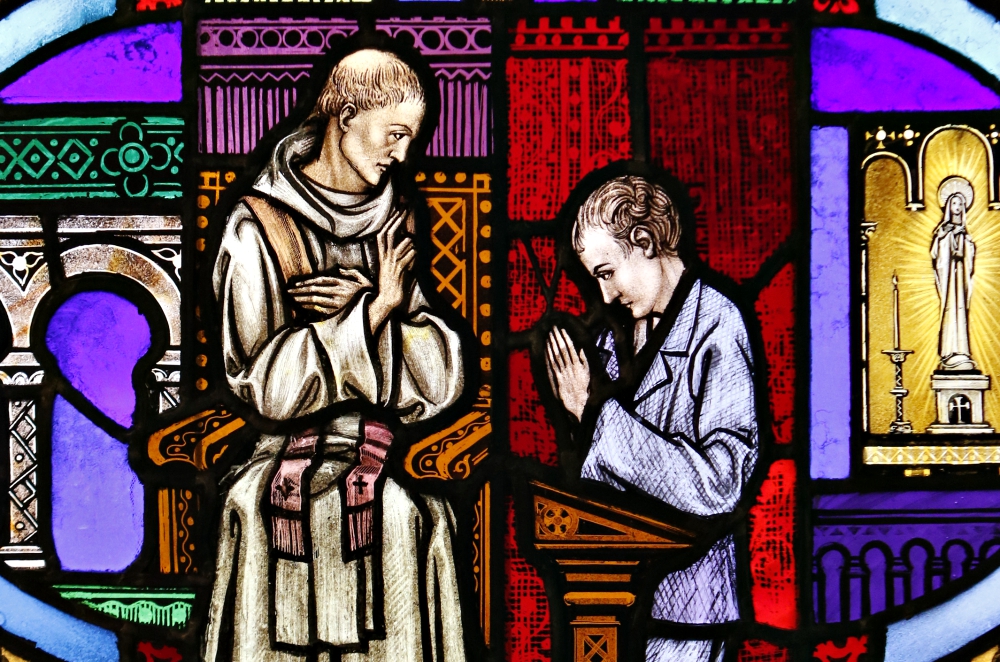 The sacrament of reconciliation is depicted in a stained-glass window at St. Aloysius Church in Great Neck, New York. (CNS/Gregory A. Shemitz)

How many children have been sexually abused, over time and throughout the world, by serial predators because priests, to whom these culprit priests, parents, teachers or other persons sacramentally confessed their crimes and sins, are bound by the absolute secrecy of the seal of confession?

Indeed, Catholic Church law unconditionally forbids any priest from betraying a penitent, for any reason whatsoever, whether by word or in any other fashion, and any priest who directly betrays a penitent would incur an immediate and automatic excommunication. As a result, sexual abusers go unreported to civil and church authorities, and potential additional victims are endangered.

This is not new church law. Similar church legislation can be found at least by the 12th century and continues throughout the following years to this present day.

However, this wasn't always the case. Within Canon 1447 of the Catechism of the Catholic Church we read: "During the first centuries the reconciliation of Christians who had committed particularly grave sins after their Baptism (for example, idolatry, murder, or adultery) was tied to a very rigorous discipline, according to which penitents had to do public penance for their sins, often for years, before receiving reconciliation."

Clearly, the church's use of public penances for centuries hardly endorses a seal of confession.

Nevertheless, I realize that there are some people who hold that the seal of confession is a matter of divine law, having been intended by the Lord in the establishment of the sacrament of reconciliation and, thus, cannot be changed. However, if that were so, why did the Holy Spirit allow the church to employ public penances over the first centuries? I respond: Because the seal is not a matter of divine law.

And I say that change is needed. To do so we must distinguish confidentiality that is intended by the Almighty for the common good of human life from the statute of secrecy or seal that was established by church authority.

Unquestionably, secrets have a proper place in our lives. At times, governments need secrets, businesses need secrets, families need secrets, individuals need secrets, and even the church needs secrets. Yet, if secrets contribute to endangering minors and vulnerable adults to be preyed upon by sexual abusers, that form of secrecy is immoral and perhaps illegal, depending on the civil laws at hand.

Furthermore, many states have established mandatory reporting laws regarding the sexual abuse of minors; such laws require compliance by members of the clergy, yet exempt information learned by a priest in a confession because of the priest's obligations under the seal of confession. Consequently, the common good of the society is frustrated by legislation yielding to the church's seal.

Only a pope can revise the law and I suggest that Pope Francis do just that, now. He should release from the seal of confession all information regarding sexual abuse of a minor or a vulnerable adult so that this information may be provided to civil and church authorities. I am not suggesting the elimination of the seal of confession but rather a modification of that law in a very specific way.

Why now? Because the sexual abuse issues of the past months that have been focused on Francis and some other leaders of the church's hierarchy seem to set the perfect timing for this change. The church has been shaken to its core and that core needs corrective action. And my suggested change in the seal of confession law would provide an important alteration to that core — publicly disclosing sexual abusers and holding them accountable, while also protecting innocent people.

Otherwise, if my suggested modification to the law is not implemented, whose child or grandchild will be the next victim of sexual abuse, thanks to the protection afforded to sexual abusers by the seal of confession?

[Fr. James E. Connell is a priest of the Milwaukee Archdiocese, a canon lawyer, an advocate for victims/survivors of sexual abuse, and a member of Catholic Whistleblowers.]

A version of this story appeared in the Dec 28, 2018-Jan 10, 2019 print issue under the headline: Now is the time to modify the Catholic Church's 'seal of confession'.