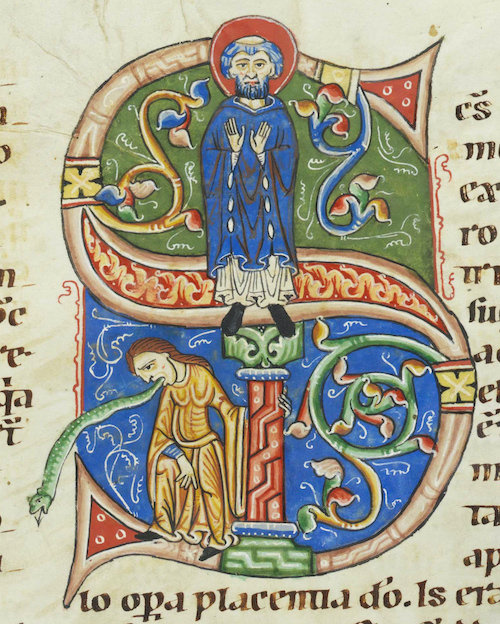 St. Simeon the Stylite depicted in an illumination in the "Passionary of Weissenau," of the 12th century Bodmer Codex (Wikimedia Commons/Cologny, Fondation Martin Bodmer) 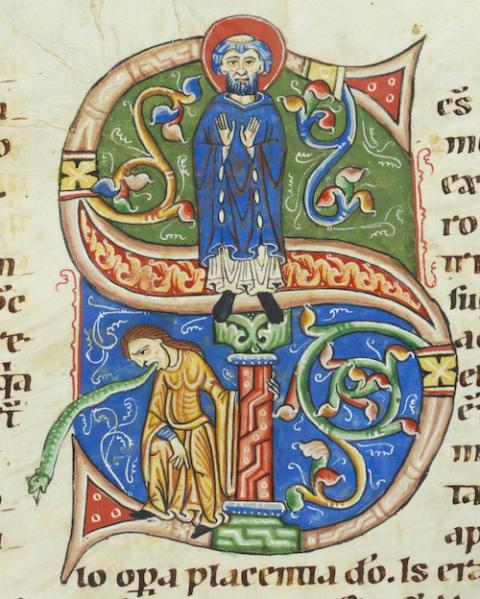 St. Simeon the Stylite depicted in an illumination in the "Passionary of Weissenau," of the 12th century Bodmer Codex (Wikimedia Commons/Cologny, Fondation Martin Bodmer)

I call heaven and earth today to witness against you: I have set before you life and death, the blessing and the curse. Choose life, then, that you and your descendants may live.

Some fear that organized religion might falter unless the faithful closely commune between four walls and under a roof — against public health advice. Recent surveys in the United Kingdom suggest the exact opposite. Since the prohibitions began, a quarter of adults have participated in a religious service through television, radio or various online and virtual connections. Of those, 5% claim never to have worshipped in church before. Contrary to expectations, so-called social distancing might increase religious devotion.

Of course, the actual mandate is not "social" distancing — absurd jargon — but physical distancing. And that problematic physicality is precisely what religion is uniquely equipped to overcome, to transcend risky physicality through metaphysicality. Those who claim that an emergency ban on death-threatening physical proximity violates religious freedom disdain the transcendence that religion offers. A fifth-century monk and a 19th-century rabbi teach us how strong it can be.

Around 410, in the countryside outside Aleppo, an 18-year-old shepherd withdrew from the secular world to join a monastery. When his piety proved excessive for his fellow monks, his abbot asked him to leave. He never returned. He sought refuge at the bottom of an abandoned well, then in a cave. Ultimately, he built a small cell on top of a pillar, initially about 6 feet high. Stylos, Greek for pillar, gave him his name: St. Simeon the Stylite. Over decades, he maintained his solitary devotions, fasts and other forms of ascetic practice, but these very acts attracted more and more veneration from both poor and powerful. To avoid such distractions, he raised his pillar ever higher, eventually piercing 80 feet into the sky, the same number as his years as a monk. He spent 47 of those atop his pillar.

Around 1860, in the midst of denominational struggles over sanctuaries and ritual, the highly influential German Rabbi, Samson Raphael Hirsch, one of the inspirations for modern Orthodox Judaism, provocatively preached, "At a time as confusing as ours, the most radical and thoroughgoing treatment with promise of a cure might be to close all the synagogues — provisionally — for a century! .... To have all synagogues closed by a Jewish hand would ... proclaim most emphatically thatc... the focal point of Judaism lay not in the synagogue."

The contexts for these two extreme but pious advocates of physical distancing were not the same as the challenges to people of faith today, but Simeon's quasi-quarantine, initially 6 feet distant, responded to metaphorical plagues. He became an exemplar. Pillar people, hermits, anchorites and other socially and physically distancing monks started to populate the countryside. They inspired a voluminous record of saints' lives, spiritual literature for the ages.

Rabbi Hirsch's shocking proposal authentically highlights the centrality of hearth and family — rather than public edifices — in Judaism. Although his words were uttered at a moment of denominational contention over communal space, they do offer abiding insight. Some of his modern Orthodox heirs have started to invoke them to adapt religious practice against the virus.

To be sure, today no one proposes to shut synagogues for a century or to spend nearly half a century solo atop a skyscraper, but the quiet contemplative sabbath of the soul now needs to be encouraged with greater intensity everywhere. A pastor can shepherd, like Simeon, in many different ways.

Most faithful know this. Overwhelmingly, once informed, they have responded to the plague in thoughtful, responsible and imaginative ways. But a small faction — almost threatening a new Jonestown and their fellow-travelers — has willfully refused. Thereby they devalue religious experiences that may be private, solitary and metaphysical. Perhaps unfamiliar with the words and deeds of the saint and the rabbi, they feel that only housed herds, large jamborees and sacraments conceived as static rites can deliver meaning and salvation. Such behavior not only denies life, but also disparages the freedom of religiously-inspired creativity. To resist the plague, such creativity is true resistance.

Today no state action threatens that resistance. On the contrary, it encourages it to flourish. The life-threatening consequences of violating sensible temporary restrictions appear repeatedly in the news. The violators may be a minority, but it only takes a few perpetrators to threaten the many innocent victims — disproportionately the poorest and most oppressed — in the midst of this pandemic. The sensible religious majority must embrace imaginative spiritual first aid, repudiating and combating in the strongest terms those who threaten life along with those who would aid and abet them.

[Benjamin Braude teaches in the history department at Boston College and is the author of Christians and Jews in the Ottoman Empire (Lynne Rienner Publishers).]