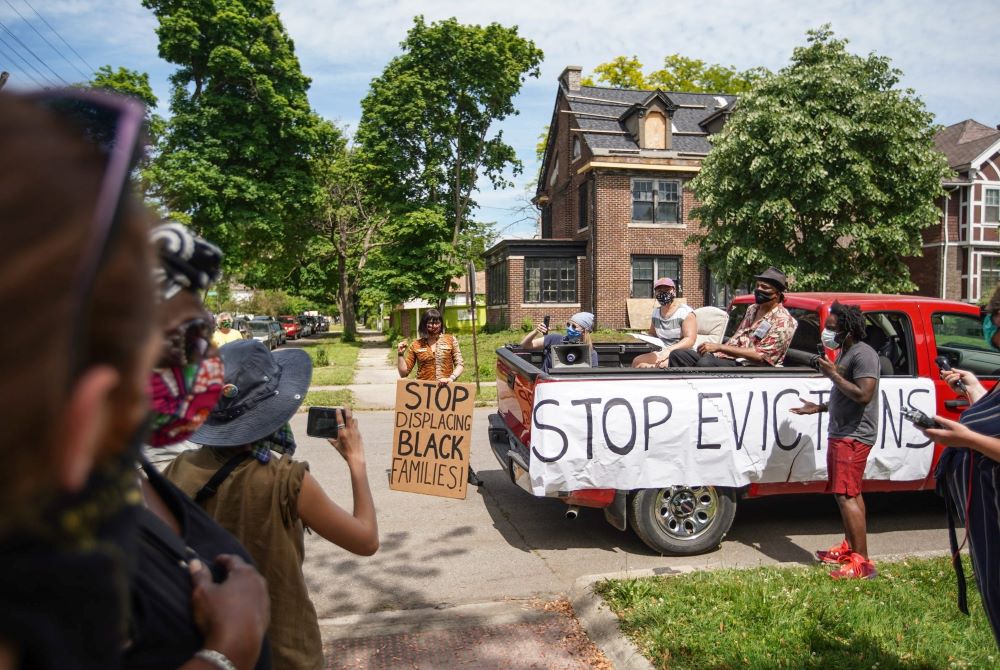 Tristan Taylor of Detroit speaks to people gathered June 9, 2020, during a caravan protest through Detroit neighborhoods while calling for relief for tenants and mortgage borrowers during the coronavirus pandemic. (CNS/USA Today Network via Reuters/Ryan Garza)

Over the last few weeks in our law school clinic at Indiana University, we spoke with Jade, whose child's special-needs care center shut down during the pandemic, forcing her to miss multiple weeks of work and go without a paycheck. We also talked to Darren, whose retail job evaporated last year, shortly before he contracted COVID-19. Tonya is caring for a sick relative and facing a pile of medical bills.

Their names have been changed here, but their struggles are quite real: All have fallen behind on their rent, and all are facing eviction. Like millions of other Americans, Jade, Darren, Tonya and their families are on the edge of homelessness.

More than half of U.S. renter households lost employment income between March 2020 and March of this year, and one in five of those households is behind on their rent, according to a recent report from Harvard's Joint Center for Housing Studies. Nearly 30% of Black renter households owe past-due rent, says the report.

For many of these renters, the U.S. Centers for Disease Control (CDC) eviction moratorium has granted a reprieve. But the moratorium is set to expire on July 31, and the Biden administration has indicated it will not be extended beyond that date.

Over 4 million Americans are telling the U.S. Census Bureau they expect to be evicted or foreclosed on in the coming months. Past eviction data show that the families thrown out of their homes will include a disproportionate number of Black women with children.

This is a full-blown crisis, and U.S. Catholics are called to respond to it with both direct service and advocacy. Curtis Johnson, vice president of housing strategy at Catholic Charities USA, says that their network owns and operates over 37,000 affordable housing units. But it also maintains waitlists of nearly 73,000 desperate applicants, which triggers an obligation to advocate for systemic solutions.

"The need is great and that message has to be broadcast continually," Johnson told me. "Our commitment to promote the common good requires that we advocate on the local level for the specific needs of those persons and families we serve, and advocate on social policy issues in general in order to shape just regulations and laws, and adequate financing for housing development and assistance."

Catholic Charities' position was delivered to the CDC directly in a March 26 letter from Archbishop Paul Coakley, chair of the U.S. bishops' Committee on Domestic Justice and Human Development; and Srs. Donna Markham and Mary Haddad, presidents of Catholic Charities USA and the Catholic Health Association of the United States, respectively.

While urging a temporary extension of the eviction moratorium, the three were careful to point out that the current eviction crisis is built on a longtime gap in safe, decent housing.

"Even before COVID-19, this nation faced an affordable housing crisis. There is an insufficient supply of low-rent housing, and federal assistance has failed to keep pace, with people of color most likely to be cost-burdened by housing expenses," they wrote. "It will be necessary to invest in long-term solutions for thriving families and a more equitable society."

Read this next: Millions of renters owe billions of dollars. Sisters are doing what they can to help

This summer's crisis is acute, but it is not new. Nor is the Catholic response combining advocacy with service. "We are very proud of our efforts to feed and shelter the poor," the U.S. Catholic Conference said back in 1988. "However, there is no substitute for an involved, competent, and committed federal government providing resources, leadership, and direction for a broad and flexible attack on homelessness and poor housing."

Our federal government response should immediately fill the gap that causes only one in four eligible families to receive federal rental assistance. Catholic Charities works closely with the National Low-Income Housing Coalition, which shares the organization's goal of every eligible family receiving vouchers or other assistance that subsidizes housing costs above 30% of family income.

"Housing is a human right. Each person must have safe, affordable housing," Johnson said. "For the common good, we believe that government at all levels has a social responsibility to ensure that persons are adequately housed."

Federal dollars to meet that responsibility are available, especially when considering the estimated cost of a universal housing voucher program is far lower than the $70 billion per year that the mortgage interest deduction costs the federal government each year. The deduction's cost also far exceeds the entire budget for the Department of Housing and Urban Development, yet 80% of the mortgage interest deduction's benefits accrue to the richest 20% of Americans.

"Housing is a human right. Each person must have safe, affordable housing."

We should also push our communities to follow the lead of several cities and states that are ensuring a right to counsel for tenants facing eviction. Rubber-stamped evictions are the norm when landlords regularly have attorneys representing them, while tenants almost never do.

And we should support restrictions on access to eviction records, which act as a "Scarlet E" blocking renters from safe, affordable housing, condemning many to living on the streets or an on-the-edge existence in extended-stay motels.

All these reforms are consistent with well-settled Catholic teaching that rejects the notion of housing as a commodity, available only to those who can afford a price that generates profit.

"The Catholic Church teaches that access to safe, decent, and affordable housing is a human right as well as a demand of the common good," Coakley, Markham and Haddad wrote to the CDC, citing the Compendium of the Social Doctrine of the Church.

As we consider this mandate to treat housing as a human right, we should also recognize that Jade, Darren, Tonya and their families face the modern-day version of "no room at the inn." A lack of housing was Christ's original earthly struggle, one that millions of Americans embody every day. On their behalf, we must insist on an enduring, comprehensive guarantee of housing for all.