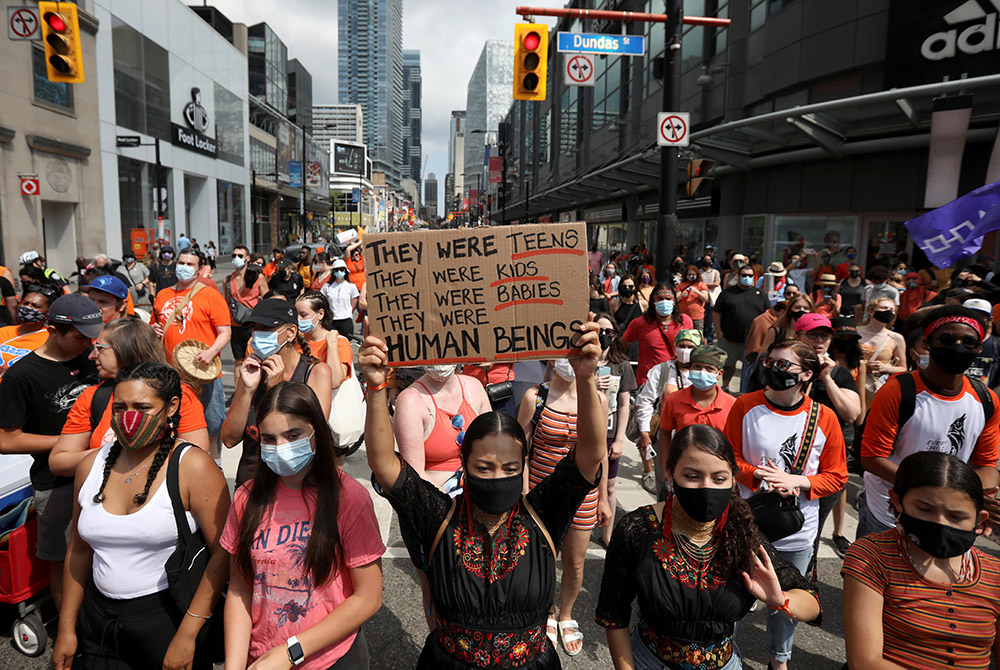 People take part in a march on Canada Day in Toronto July 1, after the discovery of hundreds of unmarked graves on the grounds of former residential schools for Indigenous children in Canada. (CNS/Reuters/Carlos Osorio)

Over the years, Indigenous leaders, Prime Minister Justin Trudeau, Canada's Parliament and plenty of Catholics have all called on Pope Francis to apologize for the Catholic Church's role in residential schools on Canadian soil. Catholics operated up to 60% of the schools, where Indigenous children were separated from their families, abused and alienated from their histories and language in a process of cultural genocide. Canada's Truth and Reconciliation Commission, which centered on residential schools and finished in 2015, provides some clear guidelines and ample evidence as to what, exactly, an apology should look like, pointing to a 2010 apology made to victims of abuse in Ireland.

So why hasn't Pope Francis made the trip?

While demands from politicians or community leaders might create public pressure, only one body holds the keys to a papal visit: the Canadian Conference of Catholic Bishops.

It's easy to view the Catholic Church as a strict, obvious chain of command. While the church is hardly a democracy, authority is distributed in complicated ways. The pope is authoritative, but he respects the autonomy of local bishops. Without a collective invitation, the pope will not invite himself to a country out of respect for those bishops.

In other words, unless the Canadian Conference of Catholic Bishops requests the pope to come to Canada, no amount of political or moral pressure will get the pope on a plane. And since the bishops have not been unanimous when it comes to wanting a papal apology in Canada, the conference has stalled the process. The Canadian bishops may not always say this publicly, but it's not a secret in the church.

While several bishops have said they want a papal apology in Canada, and some have even tried to make it happen independent of unity within the conference, other bishops often appeal to flimsy excuses to deflect the fact that they have not, as a conference, extended the invitation. For example, in a recent CBC interview with Rosemary Barton, the archbishop of Toronto, Cardinal Thomas Collins, cited two major difficulties: the pope's age, and the complexities involved in high profile papal journeys.

These may indeed be difficulties, but they aren't insurmountable.

In March, Francis went to Iraq in the middle of the pandemic. His potential trips in 2021 keep him close to home, but Francis has expressed a desire to visit the war-torn country of South Sudan. Apart from Pope John Paul II, Francis is the most traveled pope in the history of the Catholic Church, and there is no indication that he has any intention of stopping.

As for complexities, Francis could limit such a trip to meeting with Indigenous people and residential school survivors, responding to the call to apologize in Canada, and moving on.

Of course, Francis could choose whether or not these are barriers himself — if he was given an invitation.

Collins added that grand gestures are not the most significant steps on the path to reconciliation, and he emphasized the quiet, day-to-day work on the ground. In covering reconciliation efforts as a Catholic journalist in Canada, everyone I have spoken with who does such work has said a papal apology in Canada would help their efforts. If the bishops want to empower local work, they should actively seek a more global apology.

In a particularly egregious deflection, certain bishops like to cite an apology made by Pope Benedict XVI to a delegation from the Assembly of First Nations in 2009. Phil Fontaine, at the time the national chief of the AFN, said the meeting should "close the book" on the need for an apology. After the findings of the TRC, however, Fontaine made it clear that things have changed, and he wants a papal apology in Canada. Some bishops and the bishops' conference itself have nevertheless continued to quote Fontaine's 2009 remarks. In 2018, Fontaine said the bishops were misusing his words to resist calls for an apology in Canada. 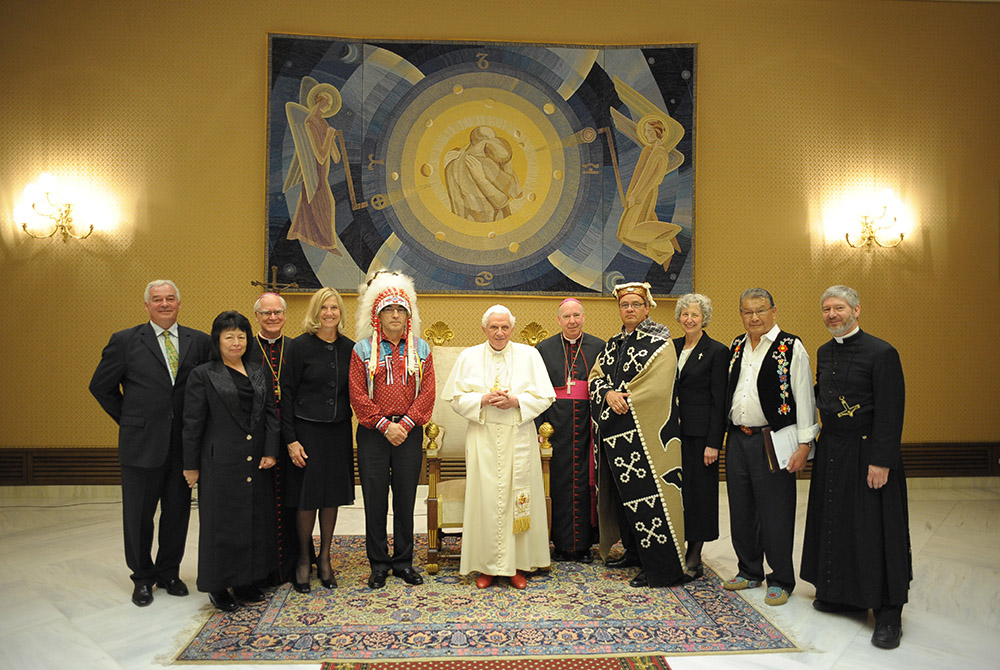 Pope Benedict XVI poses with representatives of students at the former Indian residential schools and the church in Canada at the Vatican April 29, 2009. (CNS/L'Osservatore Romano)

Collins again cited Benedict's 2009 apology in his conversation with Barton, and the Archdiocese of Toronto cited Fontaine's comment in a Q&A on the archdiocese's website, following a statement on the discovery of 215 unmarked graves in Kamloops, British Columbia. Appearing on Barton's show immediately following Collins, Fontaine reiterated that while the 2009 meeting with Benedict was reassuring to him, it was not the end of the process. That some bishops continue to cite Fontaine's words to imply the opposite is, frankly, insulting to Fontaine, to Indigenous people who still want an apology and to faithful Catholics who want to trust that their bishops are sincerely listening to Indigenous people.

There is also a certain sense of denial on the part of the bishops' conference when it comes to the culpability of the church. The Canadian Conference of Catholic Bishops website states that the church is decentralized and emphasizes that 16 out of 70 dioceses and "about three dozen Catholic religious communities" were associated with residential schools. According to the Canadian bishops' conference, many of the bodies responsible have already apologized.

To limit the responsibility, however, for a colonial system of abuse to a minority of discrete actors is an alarmingly thin understanding of sin and guilt, one that sounds more like a technicality from a corporate board than the result of a careful examination of conscience by those responsible for proclaiming the Gospel.

Paul wrote of the body of Christ in 1 Corinthians 12 that "if one member suffers, all suffer together with it." The desire for a papal apology in Canada stems from a common sense and correct intuition that while there may not be one single legal entity known as "The Catholic Church of Canada," the church — its bishops, religious and lay communities, theology and so on — was integrated into the colonial system. As such, the head of the church should apologize on its behalf, and he should have the courage to do it where the harm was done. 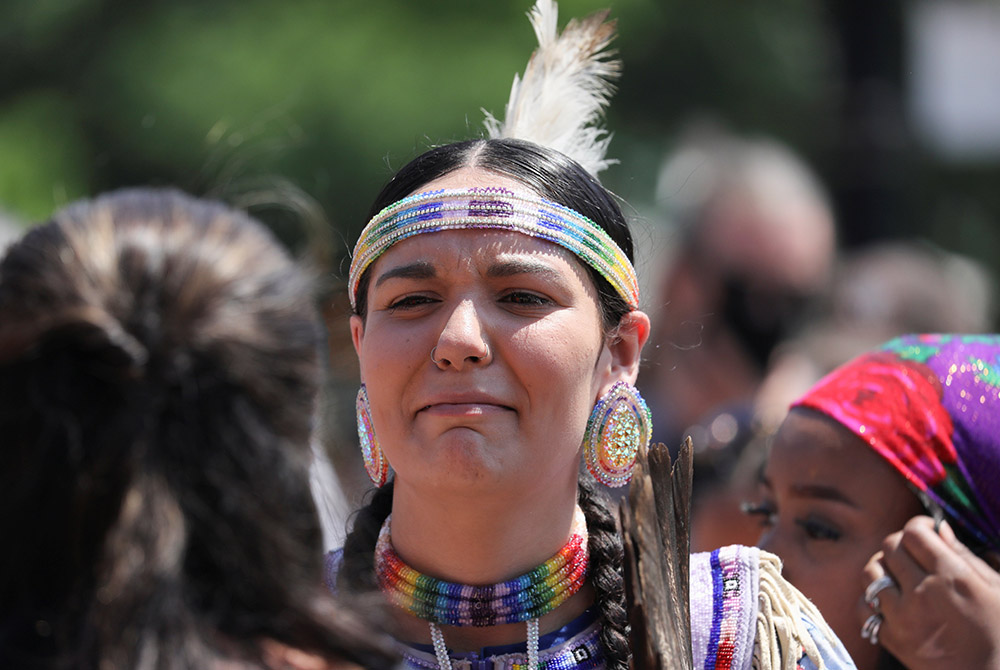 A protester takes part in a march from the Ontario provincial legislature in Toronto, Ontario, June 6, after the remains of 215 children were found on the grounds of the Kamloops Indian Residential School in May. For years Indigenous people in Canada have wanted an apology from the pope for the church's role in abuse at Catholic-run residential schools. (CNS/Reuters/Chris Helgren)

As the first pope from the Americas, Francis has shown a willingness to apologize for the Catholic Church's treatment of Indigenous people and its role in colonialism, which he did in Bolivia in 2015.

If Canada's bishops collectively called on Francis to apologize in Canada for the sake of reconciliation, I would be shocked to learn he refused. By not inviting him, the bishops are, intentionally or not, allowing people across Canada to direct their frustrations at Francis and evading their own responsibility.

There are notable exceptions of Catholic bishops engaging the history and ongoing violence of residential schools, especially in western Canada, where Archbishop Don Bolen of Regina, Archbishop Michael Miller of Vancouver and others have been investing time and resources into reconciliation efforts in their own dioceses. But the fact is, there is nothing external preventing the Canadian bishops as a conference from inviting Francis to apologize for residential schools in Canada.

Why some bishops are still putting up a fuss is not clearly or openly stated. Journalists and the public should be regularly posing the question.

It should not take macabre discoveries and stacks of letters to remind bishops why the trip needs to happen. Indigenous people, Canadians working toward reconciliation and all Catholics entrusted to the pastoral care of the bishops deserve better.