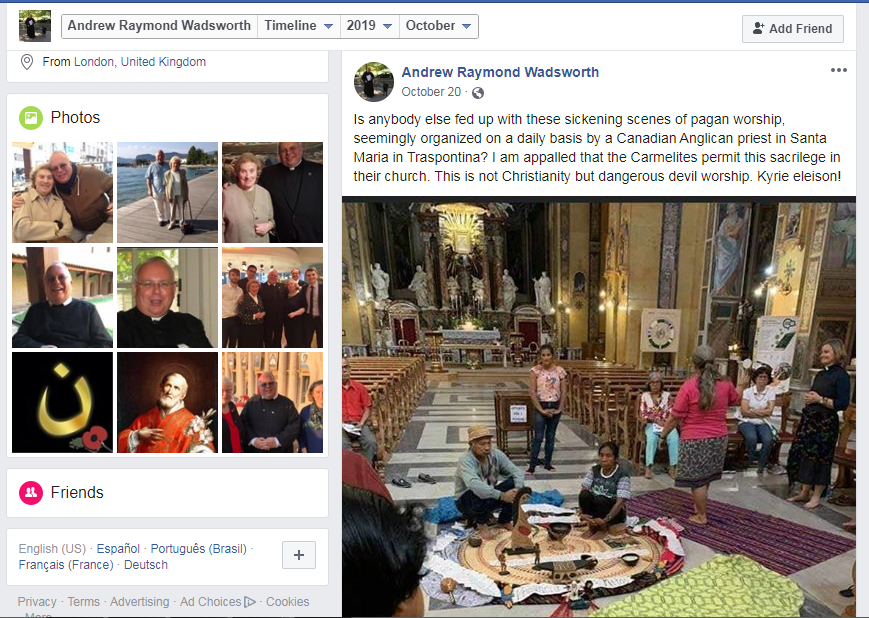 The priest who heads the international Vatican group that prepares English liturgical translations has criticized the recent synod for the Amazon in a series of social media posts.

"I, Andrew Raymond Wadsworth, do not wish to belong to the new idolatrous Pachamama Church currently being brought into being,"said an Oct. 26 post on a Facebook account with the priest’s name.

That post was accompanied by a picture of Jesus on a throne, with the words "Christus Vincit. Christus Regnat. Christus Imperat"— Latin for "Christ conquers. Christ reigns. Christ commands.”

Wadsworth is executive director of the International Commission on English in the Liturgy (ICEL) Secretariat, which is based in Washington D.C. The secretariat coordinates and implements the directives of the commission of 11 bishops’ conferences from countries where English is the primary language used in the liturgy.

Wadsworth, a priest of the Westminster Archdiocese in the United Kingdom, has served as executive director of the ICEL Secretariat since 2009.

Several posts on the Wadsworth Facebook account criticized the incorporation of indigenous symbols into the Synod for the Amazon, particularly what some called the "Pachamama”— a  fertility goddess or "Mother Earth"figure in South American culture. A wooden statue of an indigenous pregnant woman was stolen from a Rome church and thrown into the Tiber River in protest toward the end of the monthlong synod. 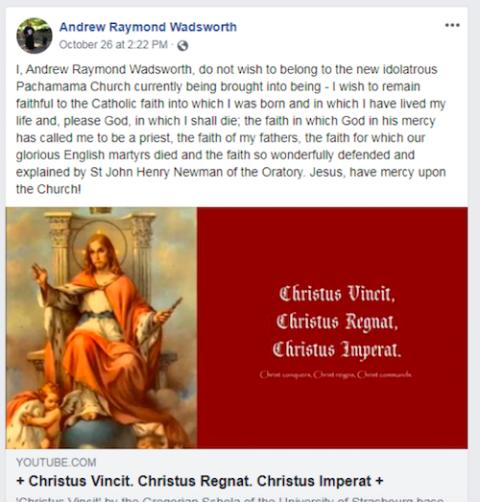 "Is anyone else fed up with these sickening scenes of pagan worship, seemingly organized on a daily basis by Canadian Anglican priest in Santa Maria in Traspontina?" said a Oct. 20 post on Wadsworth's account, accompanied by a photo of indigenous people in the Rome church.

"I am appalled that the Carmelites permit this sacrilege in their church," the post said. "This is not Christianity but dangerous devil worship. Kyrie eleison!"

On Oct. 24, Wadsworth shared a photograph of a traditional Mass in Brazil with the comment "Not everyone in the Amazon is worshipping idols …".

Two days later, he also shared a photograph of the pregnant woman statue in church, accompanied by this scriptural quotation:

When therefore you shall see the abomination of desolation, which was spoken of by Daniel the prophet, standing in the holy place; he that readeth let him understand. Then they that are in Judea, let them flee to the mountains. Matthew 24:15-16

On Nov. 3, he shared a photo captioned "Demon Pachamama Adored in Lima Cathedral," with his comment that "This looks to be unambiguously idolatrous Pachamama worship in the Cathedral of Lima, Peru. I don't believe this woould have happened under the watch of the previous archbishop, Juan Luis Cardinal Cripriani Thorne."

Thorne, who was an Opus Dei priest, retired in January at the age of 75. During his tenure, he regularly denounced same-sex unions and banned the reception of Communion in the hand.

At St. Thomas the Apostole Parish in Washington, D.C., where Wadsworth is in residence, he is listed as moderator, or superior, of the Oratory of St. Philip Neri. Oratorian priests are bound by no vows but commit to independent, self-governing communities.

Wadsworth and fellow Oratorian priest Fr. Richard Mullins, who is pastor at St. Thomas the Apostle, both attended a Nov. 12 talk given by Alexander Tschugguel, the Austrian who took credit for throwing the statues in the Tiber River. Tschugguel spoke in McLean, Virginia, at an event sponsored by American Society for the Defense of Tradition, Family and Property (TFP). The original TFP is a Brazilian traditionalist Catholic political movement founded in 1960.

On his Facebook page, Wadsworth shared several videos of Tschugguel, as well as a video of a priest in Mexico City burning effigies of the statues to atone for the "idolatry." The latter was from LifeSiteNews, a right-wing Canadian website.

Wadsworth also shared a number of articles critical of the synod, such as one titled "Liberalism and Idolatry Go Hand in Hand" from Crisis magazine and a video on YouTube in which blogger Msgr. Charles Pope from LifeSiteNews urges Pope Francis to lead the church to repent for "Pachamama idolotry." 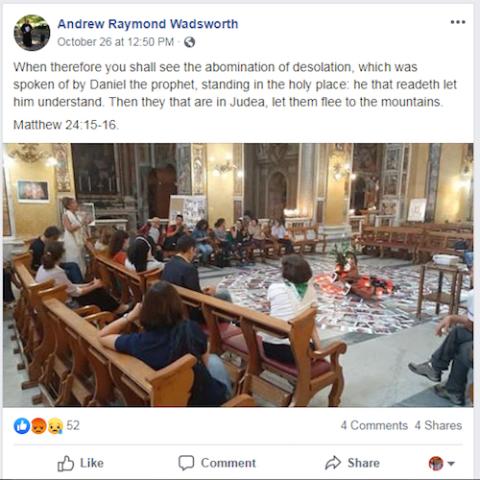 He also shared the Oct. 31 edition of EWTN's "The World Over" in which host Raymond Arroyo interviews Kazakhstani Auxiliary Bishop Athanasius Schneider, who has been critical of the synod and of Francis, and an Oct. 26 open letter from Schneider about the statue.

Another post, from Oct. 21, appeared critical of the Second Vatican Council. Sharing a video on YouTube of the opening of Vatican II by Pope John XXIII in 1962, Wadsworth wrote, "The triumph of sentiment over the content of the faith — this is how it began 57 years ago!"

After NCR contacted Wadsworth at the parish and at the ICEL offices, leaving messages asking for comment on the Facebook posts, the account was made private. The account's profile picture is of Wadsworth, with a cover photo with the words "JE SUIS PRETRE," which means "I am a priest" in French.

ICEL was created in 1963 to prepare English translations of Latin liturgical books and texts. Each of the 11 conferences that are full members of ICEL has an elected bishop on the commission. Bishop Arthur Serratelli of Paterson, New Jersey, is the United States' representative.