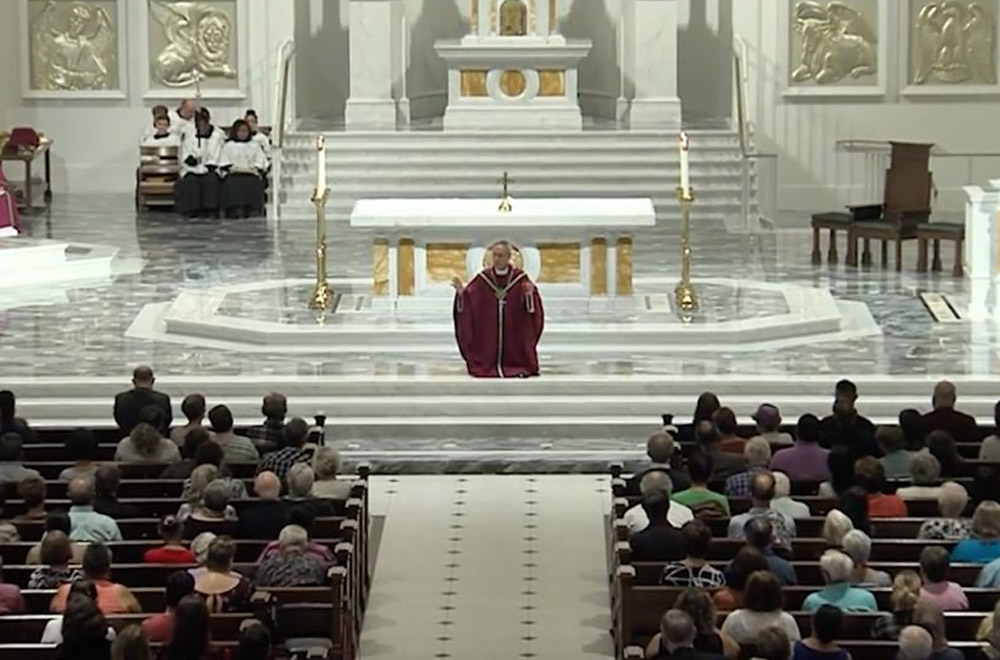 Bishop Luis Rafael Zarama kneels to address the congregation Sept. 25 at a Mass of Reparation and Prayer for Healing in Raleigh, North Carolina. (Courtesy of Diocese of Raleigh)

Calling the sex abuse of children a "horrible crime," Bishop Luis Zarama of Raleigh, North Carolina, dropped to his knees and begged his congregation for forgiveness during a "Mass of Reparation and Prayer for Healing" celebrated the evening of Sept 25 at the recently opened cavernous Holy Name of Jesus Cathedral in the state's capital city.

"In the name of the church I ask you for forgiveness," Zarama said as he stooped to kneel on the hard marble floor, a position he held — always in an upright posture — throughout his penitential homily, which lasted more than 15 minutes.

With his voice cracking, Zarama, 59, who was installed as Raleigh's fourth bishop a year ago, said he was responding to the victims of pedophile priests who are "crying out from the depths of their wounds ... asking for love."

With hundreds of Catholics present for the special weekday Mass, the bishop said he wished he could hug each victim of sex abuse, "take away your frustration and give you peace ... that I can take that suffering from you."

Saying he did not have "a magic touch" to erase the victims' pain, Zarama, a native of Colombia, said his recommendation to Catholics was to search "for holiness" in their lives. "In the middle of our suffering we are called to search for Jesus in the midst of our pain," he said.

"We have Jesus Christ as our best solution. We need to open our hearts to grace, mercy and love, that the Lord will give us what we need; that is his love that is the best medicine."

Zarama beckoned believers to seek out the Eucharist — "the host and the wine" as medicine for healing; "the very sweet taste of the medicine of the love of Jesus Christ," he said.

Zarama's message was comforting to Raleigh Catholic Meriel Brodie, 67, whose younger brother, Patrick Newcomb, was abused as a teenager by a parish priest in the family's hometown of Weymouth, Massachusetts. Newcomb, who went by "Rick," was 59 when he committed suicide April 21, 2015, a tragic outcome that Brodie said was directly related to his abuse.

Brodie said she was touched by Zarama's humility at the Mass. "The fact that he was on his knees for the entire homily," she said. "That to me was such an act of humility. I've never seen a priest do that, let alone a bishop."

Around the time of the abuse, Brodie said her brother tried to tell their parents about the abuse, "and it didn't go anywhere. This was a priest." Later, after the priest pedophile scandals were reported in Boston, Brodie's parents did believe Rick's story.

Brodie said recent revelations of more priest sex abuse charges in Chile, Pennsylvania and Germany had renewed her anger at the church.

"I just became filled with rage," she said. "Something's wrong with the church; it's worldwide. It's systemic."

Brodie, the oldest of seven children, said none of her surviving five siblings are practicing Catholics, and she thinks her brother's experience with abuse has led to her siblings' estrangement from the church. "It's very sad," Brodie said. "I feel I'm on the road to healing, but I'm not leaving the church. I tried that once before."

Rising from his knees, Zarama turned to his brother priests for closing words of comfort.

"My brother priests, I tremble for you. I'm scared because you are good priests and you are working hard ... Don't lose hope, because Jesus is hope."

[Patrick O’Neill is a longtime contributor to NCR.]