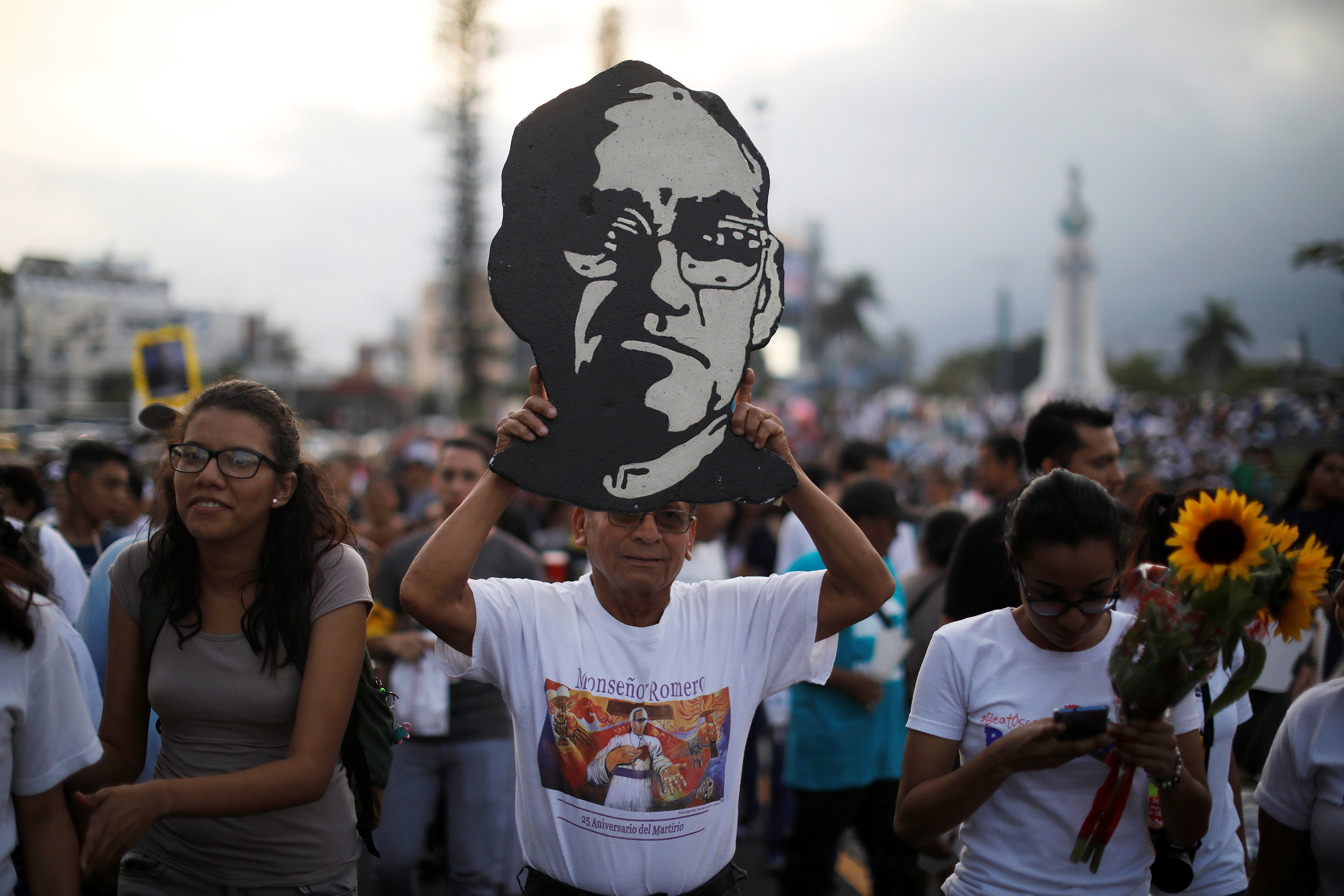 A man carries an image of Blessed Oscar Romero during a March 18 procession in San Salvador, El Salvador, to commemorate the 38th anniversary his murder. (CNS/Jose Cabezas, Reuters)

Invoking a Salvadoran who's about to become the country's first Catholic saint, the man who now occupies his old post asked immigrants and their children during an April 11 Mass in Washington to pray for Blessed Oscar Romero's intercession, a "miracle," that would allow U.S. lawmakers to grant immigration relief to thousands of Salvadorans and other immigrants to the United States.

Archbishop Jose Luis Escobar Alas of San Salvador, El Salvador, flanked by the country's Cardinal Gregorio Rosa Chavez and two other Salvadoran bishops, addressed worried immigrants gathered at the Shrine of the Sacred Heart, telling them that neither the Catholic Church, nor God, would abandon them as they face being stripped of documents to stay and work in the country legally.

In the last few months, the Trump administration announced it was ending the Temporary Protected Status and the Deferred Action for Childhood Arrivals programs that grant for a time work permits and other protections to immigrants who meet certain criteria. The end of the programs would affect more than 215,000 Salvadorans facing a return to a country in turmoil, the archbishop said.

"We would like you to invoke (Blessed) Romero for his intercession in this miracle, a solution to this problem," Escobar said. "He is with us and intercedes for us."

El Salvador's Rosa Chavez said that when the bishops in El Salvador heard that the programs would end and that those affected by the decisions were going through a difficult time trying to figure out what to do, "we wanted to express solidarity." They also wanted to take steps to try to help them. That's how the April 9-14 trip to Washington -- which includes pastoral visits with migrants, as well as meeting with U.S. lawmakers -- began.

Officials from U.S. Conference of Catholic Bishops' Migration and Refugee Services and Catholic Relief Services have facilitated the meetings in the District of Columbia as well as nearby Virginia and Maryland.

There have been Masses and dialogue with immigrants. There have been official meetings with decision-makers, with the bishops trying to let them know the devastating effects that ending both programs would have on individuals but also on the Central American country. It's a country that struggles with poverty and rampant crime, earning it a spot as one of the most dangerous places in the world not at war.

The archbishop said the group, which included Bishop William Iraheta of Santiago de Maria and Bishop Elias Samuel Bolanos Avelar, who is vice president of Caritas El Salvador, wanted to speak to U.S. lawmakers to share their accounts of what would happen at home and abroad.

When U.S. officials asked whether El Salvador could take in 195,000 Salvadorans forced to return with the end of TPS, scheduled for 2019, "we told them what they already know," that as a country El Salvador cannot offer protection at this moment given the violence and lack of jobs, said Escobar during an April 11 meeting with Spanish-language media.

Just days before they bishops left, they were still reeling from the killing of a priest from Iraheta's diocese, believed to have been fatally shot by gang members, during Holy Week.

On April 12, they were scheduled to meet with Republicans and Democrats in Congress, seeking bipartisan support for a solution for the more than 215,000 Salvadorans who could be affected if nothing is done to find a permanent fix for beneficiaries of the DACA and TPS programs.

But if they were busy trying to illustrate to members of Congress the danger -- physical and financial -- that the migrants would face, they also were trying to build hope among members of the community. They said they wanted to hear them, that they understand their worries and that they would be with them no matter what happened.

"Whatever happens to you, happens to us," Escobar told a crowd of Salvadoran immigrants in Washington after Mass. "When you're offended, we're offended."

But as a family of faith, together they would face any difficulties, the archbishop said, and El Salvador's martyrs and saints would be with them, as they have been with the country throughout its troubled history.

He spoke to them of upcoming news of the country's first saint, of having for the first time a cardinal, one who often visits Salvadorans in the U.S., of the prayers of those they left behind in El Salvador, and of the profound thanks to the U.S. bishops and the Catholic Church in the country for being with immigrants and advocating for them during a difficult time.