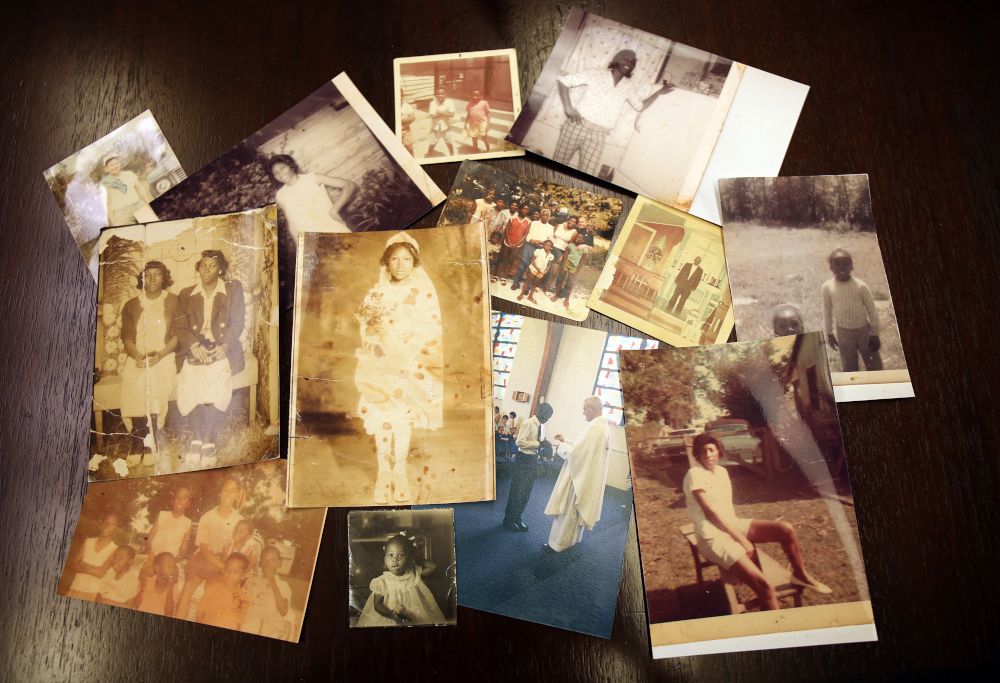 A genealogical association has launched a new website detailing the family histories of slaves who were sold to keep Catholic-run Georgetown University from bankruptcy in the 1800s.

American Ancestors announced the new GU272 Memory Project website on Wednesday (June 19), the anniversary of Juneteenth, the day in 1865 when some American slaves learned they had been freed.

But the websiteincludes a spreadsheet of 314 individuals whom genealogists have identified as being part of the group sold by the Jesuit priests. It also features audio recordings in which descendants recall memories, from segregated education to family migration away from the South.

“Having descendant voices present alongside historical documents is an essential part of the GU272 narrative,” said Claire Vail, the project’s director for American Ancestors, in an announcement about the website. “Documents provide the factual framework, but people supply the human story.”

Descendants are learning new links to their pasts as a result of the project.

“As Black Americans — as descendants of enslaved people — we have always been told ‘you’ll never know who you are. You’ll never know where you came from,’” said Mélisande Short-Colomb, a descendant of the group of slaves, in a statement about the project.

“Now that we have this data, my hope is that we can use it to open doors and make connections. We have been here since the founding of this country, and we are a significant part of the American experience.”

The website is part of a collaboration between Boston-based American Ancestors, also called the New England Historic Genealogical Society, and the Georgetown Memory Project, which was founded by Georgetown alumnus Richard Cellini. 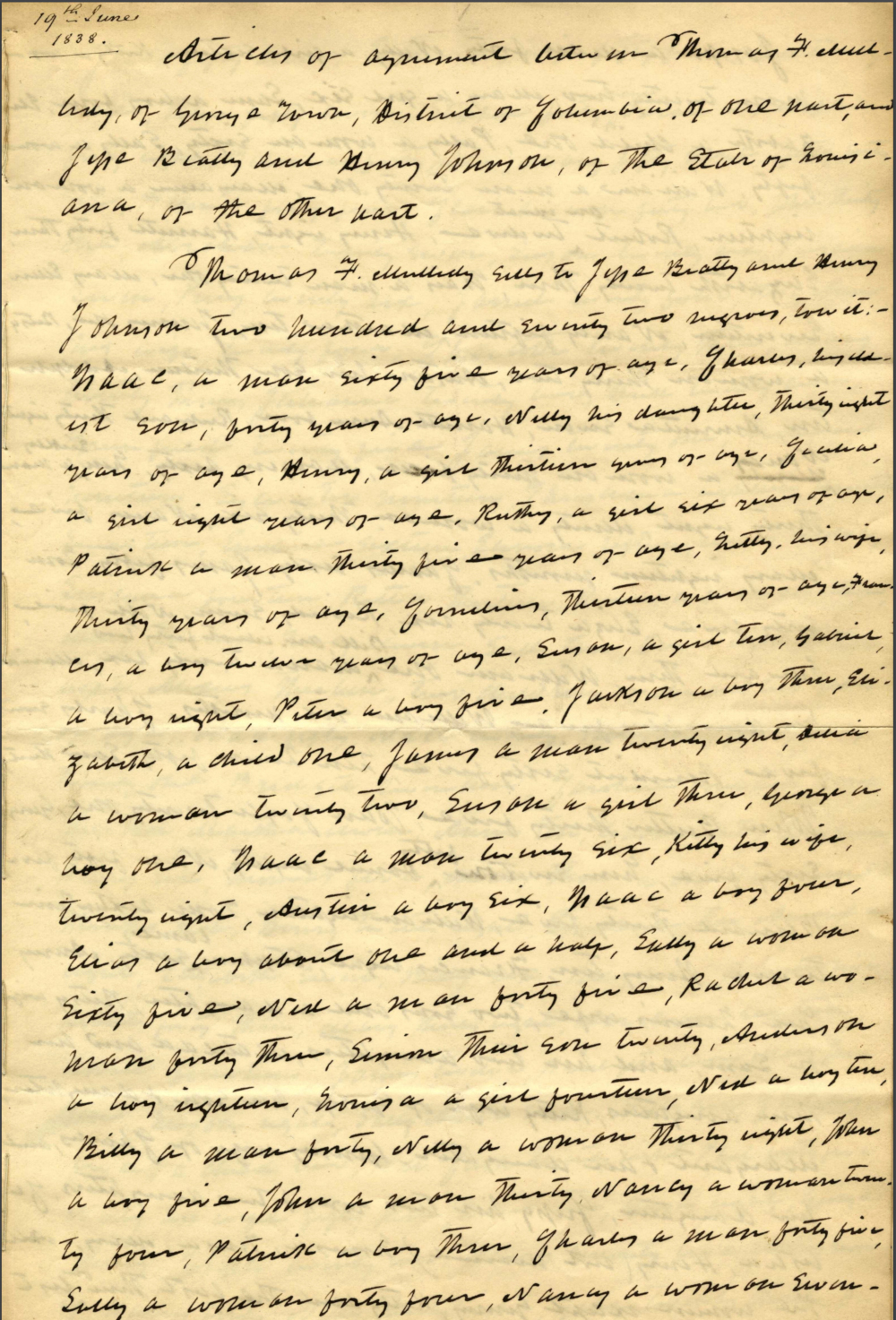 First page of the GU272 Bill of Sale from 1838. (Photo courtesy of Georgetown)

Through the project, genealogists have discovered 8,425 descendants of enslaved people sold in 1838. Close to half of them remain alive. The site includes a searchable database with genealogies of descendants who have died.

Most of the 314 enslaved people were sent to Louisiana, but about a third remained in Maryland or were sold to other locations, according to an article on the website. The article details how the sold slaves were transported to three Louisiana plantations, where they faced brutal treatment.

“A few priests expressed qualms about the morality of human trafficking to Jesuit authorities, although most were concerned with the threat a heavily Protestant South would undoubtedly present to the slaves’ Catholic faith,” it reads. “In letters written to Jesuit superiors in Maryland, one priest who accidentally crossed paths with the slaves in Louisiana after the sale bemoaned the fact that the slaves couldn’t practice Catholicism.” 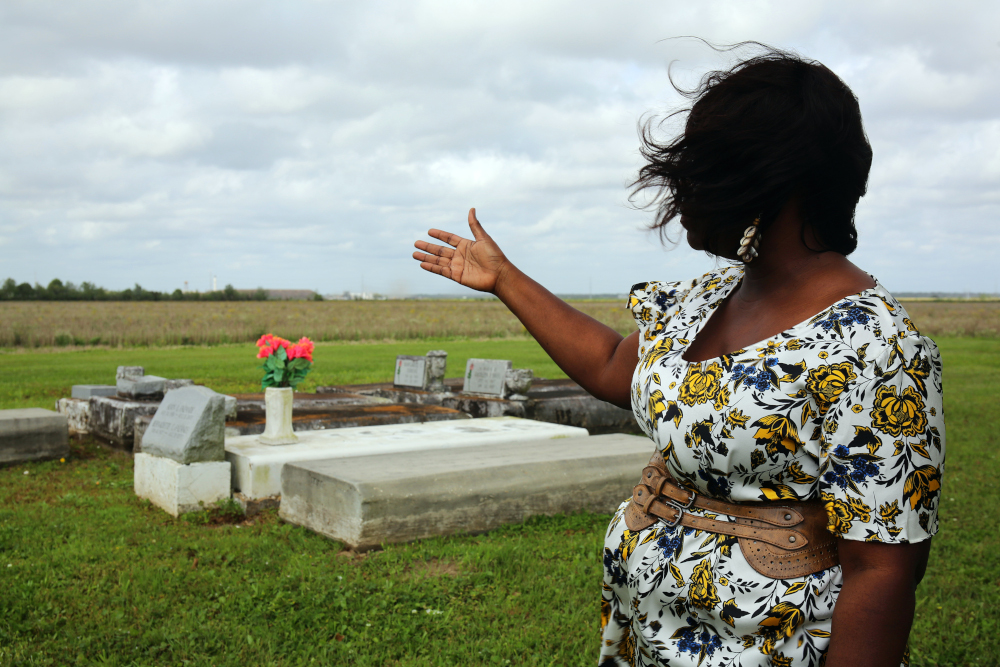 GU272 descendent Carolyn Smith gestures toward gravestones of descendants of enslaved people in Houma, La. Behind her are sugar plantations and the sugar mill where her ancestors worked. (Claire Vail)

In 2017, Georgetown University held a day of remembrance during which the president of the Jesuit order apologized to more than 100 descendants attending a “contrition” liturgy.

On that same day, the university rededicated two buildings previously named for former university presidents who were priests and supporters of the slave trade. One building is now named in honor of a slave who was 65 years old when he was sold in 1838. The second is now named for a free African-American woman who founded a school for Catholic black girls in the Georgetown neighborhood of Washington, D.C.

“Since 2015, Georgetown has been working to address its historical relationship to slavery and will continue to do so,” a Georgetown spokesman said in a statement to Religion News Service on Friday.

“We have committed to finding ways that members of the Georgetown and Descendant communities can be engaged together in efforts that advance racial justice and enable every member of our Georgetown community to confront and engage with Georgetown’s history with slavery.”